The luxury sleepwear and loungewear brand has launched for fall. 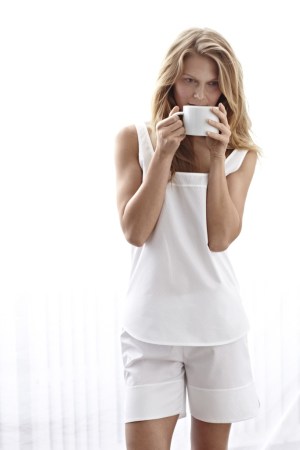 The collection, which was introduced online last week at sophiagraydon.com, is the creation of Monica Nassif, a marketing executive who began her career at Target in the Nineties. Nassif, a Minneapolis-based entrepreneur who founded Caldrea Co. in 2000, a company devoted to premium, earth-friendly household cleaners by Caldrea and Mr. Meyers Clean Day, sold her firm to S.C. Johnson in 2008.

After several years of researching opportunities, Nassif said luxury sleepwear was a niche segment that could invigorate a sleepwear industry steeped in traditional fare.

“What attracted me to this category is it lacked glamour and sophistication…There’s what I call granny flannel wear, pin-up wear and yogawear…I thought why can’t you have something beautiful, and elegant, something to slip into when you come home from work?” said Nassif, founder and president of the sleepwear firm who won the Entrepreneur of the Year award by Ernst & Young in 2003.

Nassif said she named the collection Sophia Graydon after looking through a family album.

“After naming former businesses after two daughters and my mother, I went through my husband’s family album and found two names on the family tree, siblings, and I thought the names were beautiful,” explained Nassif.

The collection — which is rendered with dressmaker touches such as deep hems, petite French seams, tuxedo striping and menswear-inspired cuffs — is comprised of four groups: the Sophia collection of Swiss cotton, the Lowry French and Italian silk group, the Odessa French lace line, and the Grand Marais Scottish cashmere and French silk collection.

Nassif noted that key pieces in the collection such as a lace or silk tops can be worn as rtw. Styles include pajama tops and pants, camisoles, boxer shorts, and robes.

“I think it’s important that the collection is made in the U.S., partly in Minneapolis and at two work shops in New York,” she said.

Plans for product expansion include slippers and travel accessories for the second season.

“We’ll have a new collection in January. This will be an evolving collection and I want to bring fashion and newness twice a year so that the consumer starts to look at this as an interesting line of apparel,” said Nassif. The line is line is aimed at a sophisticated consumer in the 30-to-50 age range.

So far, the bestselling item is a 100 percent cotton night shirt from the Sophia collection which retails for $375, she said.

Nassif said she was planning business growth “very conservatively.” A first-year wholesale sales projection was not available, but the brand could generate revenues of more than $500,000, according to industry estimates.