The bombshell actress will launch a nine-piece line of shapers at about 800 Kmart stores starting in June. 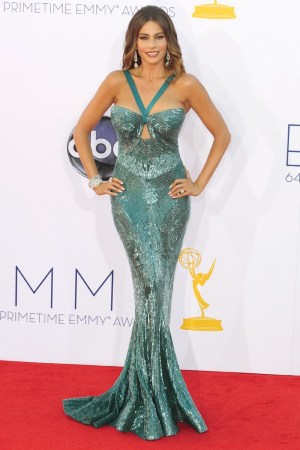 Sofia Vergara plans to bring a sexier side to her lifestyle statement at Kmart with a collection of “fun and cute” shapewear.

The nine-piece line of shapers will be launched at about 800 Kmart stores starting in June, and join the sultry Latina star’s collections of dresses, sweaters, shoes, boots, handbags, jewelry, bedding and home accessories.

This story first appeared in the April 24, 2013 issue of WWD. Subscribe Today.

“My shapewear launch is very exciting and really fun for me because the colors and materials are so sexy,” said Vergara, who was next headed to a shoot for Cover Girl cosmetics.

The shapewear is part of a deal that Kmart and LF USA, a subsidiary of Hong Kong-based Li & Fung Ltd., and Latin World Entertainment Licensing unveiled in January 2011 to launch the Sofia Vergara collection aimed at soccer moms.

At the time of the original launch, John Goodman, executive vice president of apparel and home for Sears Holdings Corp., which operates Kmart, said the tie-up with Vergara represented Kmart’s efforts “to gain more relevance in a younger audience, especially around contemporary fashion.…We have built a junior business,” with such labels as Dream Out Loud by Selena Gomez and Bongo. “We think Sofia has a great way about her. She’s beautiful. She has a specific style and she truly represents the modern woman.”

Vergara — who began her career on a U.S. Hispanic network before successfully crossing over to the general market — is a founding partner with Luis Balaguer of Latin World Entertainment, a company serving the U.S. Hispanic market and involved in publicity, licensing, endorsements, brand integration, production and content development.

“This has been a great adventure starting with clothing and accessories, fine jewelry and watches, and most recently hosiery and underwear. Now with shapewear, we have covered most of the stuff I’ve wanted to do,” said Vergara.

Asked if she personally wears shapewear, Vergara replied: “Usually, when I go to an event I wear shapewear.…It’s not to hold anything in, but to smooth everything out.…But I do have to wear a bra with everything.”

She added that “shapewear has always been a part of a woman’s wardrobe, but I wanted it to look cute, not like a horrible girdle. It’s for the everyday woman who wants to look good without spending a lot of money on shapewear, earrings or high heels that make her look cute and sexy.”

The bombshell actress said she has final approval on all of her namesake products sold at Kmart.

“I’m not really a designer but my lines are based on what I like and what I wear. We have a lot of meetings and all of the product gets tried on by me,” she said.

The shapewear collection, which will be housed in the intimate apparel department at Kmart, will include toning bodysuits, camis, tanks, bustiers, waist-shaping briefs and boyshorts, thigh slimmers, and half and full-slips. Bodysuits and bustiers with built-in bras will be cup-sized 36C to 38DD and 40D, while other items will be sized M to 2X. Colors will be combinations of black and coffee brown and black and red.

As for other projects Vergara has planned in the entertainment field, she said, “Right now, I’m on hiatus from ‘Modern Family.’ I just finished a film with Jason Statham in New Orleans called ‘Heat,’ and in July I’ll be working on a film with actor-director Jon Favreau.”