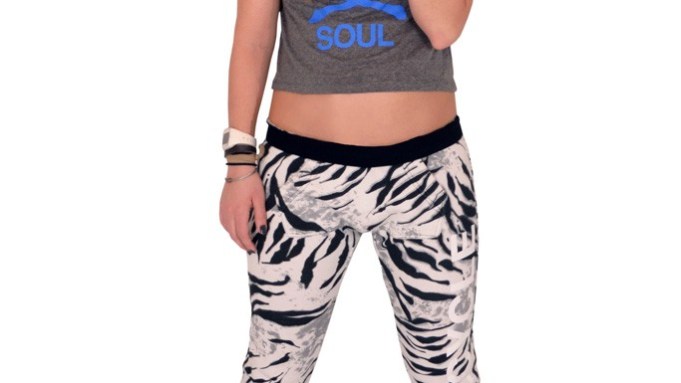 NEW YORK — With 6,000 riders pedaling their wheels each day, SoulCycle has devotees any brand would envy — and apparently those cyclists are making more time to shop.

The New York-based indoor cycling club usually sells out of its signature activewear within two to three days, according to Gabby Etrog Cohen, public relations and marketing director. SoulCycle unveiled a new location at 45 Crosby Street — near the back entrance of Bloomingdale’s in SoHo — late last month and the chain plans to have 25 outposts by the end of the year. To build on riders’ interest in activewear, “a whole retail component” will be added to its site in mid-September. (There are also branded water bottles, mugs, luggage tags, key chains and even mint tins and golf balls.)

To try to further its appeal with an already captive audience, SoulCycle is introducing its first animal-print collection with items such as zebra-printed pants and a leopard-printed tank. There will be 110 women’s and men’s styles offered with retail prices ranging from $45 to $100. Interestingly, there currently aren’t any e-mail alerts, advertising or special events to remind spinning fans that signature activewear is available. But with each studio ranging between 2,800 and 3,500 square feet, cyclists can’t take a class without passing by the compact shops, which are anywhere between 200 and 500 square feet.

Cohen, who has reduced her twice-a-day classes to one since she is expecting a baby, said, “I was looking through our inventory earlier and only the larges are left,” she said. “The extra smalls and smalls always sell out first.”

For fall, Julie Rice, one of SoulCycle’s founders, looked to the runways for inspiration and was particularly inspired by Phillip Lim. The designer is not a SoulCycle rider, but Nicole Miller, Tory Burch, Charlotte Ronson and Mary-Kate and Ashley Olsen have been spotted on the bikes.

For the first four or five years of SoulCycle’s seven-year existence, Rice oversaw the apparel arm of the business mainly on her own but there is now a 10-person team. In the company’s 20,000-square-foot offices at 609 Greenwich Street, about 1,250 square feet is dedicated to apparel.

In a recent survey of more than 1,119 outdoor cyclists who ride more than 2,000 miles a year, respondents spent an average of $460 on clothing, helmet and shoes last year, and another $270 on accessories and other gear. Roughly four in 10 participants said they purchased apparel items like shorts and bibs, jerseys, and vests or jackets more than once a year. The study was conducted by Craft, a performance sportswear company that is not affiliated with SoulCycle, in partnership with Brookmark Research Services.