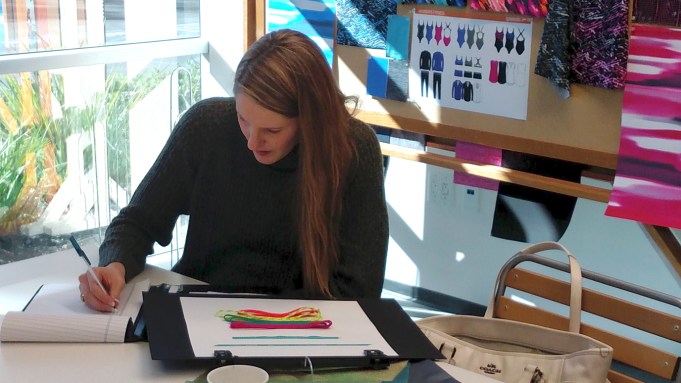 Missy Franklin is one busy lady. But while the gold medal-winning swimmer is immersed in heavy training for the upcoming trials and Olympic Summer Games, she’s still managed to find time to flex her fashion muscle.

Speedo today will reveal that it plans to launch the Missy Franklin Signature Series collection of performance swimwear later this year.

The swimmer, who won five medals at the age of 17 at the 2012 Games, was actually the one who came up with the idea of her own line and approached her sponsor with the concept.

“I’ve been wearing Speedo my whole life,” Franklin told WWD during a rare break from training. “There are so many pictures of me as a summer club swimmer in my Speedo suit and goggles. It’s a brand that I’ve trusted for so long so I’m happy this ended up coming together.”

She said soon after signing on as a Speedo-sponsored athlete last summer, Franklin brought the idea of a swimwear collection up to the brand’s brass. “I really wanted to do it,” she said. “Even as a little girl, I always thought how cool it would be if I had my own suit someday.”

Kate Wilton, senior director of merchandising and design for Speedo’s performance division, said Franklin came prepared with an entire PowerPoint presentation on her ideas for a line, “and I was in — hook, line and sinker.”

Franklin worked with the Speedo design team on patterns, prints and the color palette and Wilton also recalls a “full-on design session” at the coffee table at Franklin’s Colorado home, where the swimmer “gave great feedback on coverage and support.”

Franklin said she wear-tested the samples during workouts to ensure that the suits perform up to her standards. “I didn’t want them tested on some random person,” she said. “So I used them to dive into the pool and flip to make sure things don’t pop out that aren’t supposed to pop out,” she said.

“What better test model could we have had than Missy?” Wilton said.

The idea behind the collection is that it should inspire confidence in young women, Wilton said. The 18-piece line of one- and two-piece suits will be a combination of colorful prints and solids and will feature three color stories. Prices will be $69 for the one-pieces and $24-$34 each for the separates. This is “in the middle” of Speedo’s prices for its racing collection — average retail of $84 — and practice suits, which sell for $44 to $69, she said.

Franklin will be used in the marketing of the collection, but was insistent that her name not be on the outside of the suit. Instead, she and Speedo created a special heart logo for the inside and her name will be on the hang tag. There’s also a quote on the silicone gripper on the inside of the leg of the suits that reads: “With strength and dignity.”

Franklin sees herself as a role model for young swimmers and like everything she does, once she commits to something, she’s all in.

“It’s a big thing for me as an elite athlete and a female that it be the best-possible material and the best-possible fit — and that it’s also something fun and feminine,” Franklin said. “When I wore the suits, they made me feel like smiling.”

Not a stretch for the athlete, who has become known for her ever-present laugh. But while she may be smiling, she’s also a fierce competitor. “I’m usually in a black competition suit and a black cap, but at least I wear pink goggles,” she said. But even if she’s in a print, she can still be badass, she believes. “We’ve got some prints, where I’m like…yeah.”

And while she won’t be wearing the line until after the Olympics, she’ll have plenty of time to focus on it after the Games are over.

“I’m a little busy this summer,” she said jokingly. “Speedo has been every respectful of my schedule. So they’ll take over until it’s released when I’ll be more involved.”

Right now, she’s swimming nine to 10 sessions and six days a week. She also does three workouts in the weight room and two Pilates sessions. “It’s quite the grind,” she admitted, but a necessary evil to prepare for swimming’s greatest stage. “There’s a fun light at the end of the tunnel,” she said. “And after the summer, I can celebrate and look back on what we did.”

She said she’s looking forward to “taking a breather” after the Olympics are over where she can put “time and energy into school, family and friends.” But there’s also the inevitable post-Olympic blues. “It’s also sad. It’s here and then, quicker than you know it, it’s gone and then there’s not another for four years. But it’s all about managing and balance.”

Franklin said she’s not sure how many more Olympics she hopes to participate in, but she plans on swimming for “quite a while,” she said. “The sport can still teach me so much and it’s when I stop learning on deck then I’ll stop. I’ll swim through 2020 for sure and after that, I’ll reassess. If I’m still learning, I’ll keep at it. If not, I’ll move onto my next chapter.”

And that chapter will involve fashion.

Franklin admits that she hasn’t been a huge follower of fashion trends, but that’s beginning to change now that she’s getting her own line. “My interest is growing more and more,” she said. “And I thought this was the perfect way to dip my toes into the fashion industry. I thought I’d start off close to home and hopefully branch out someday.”

Franklin said she’s most comfortable in sweats when she’s not in the pool, “but I’m also secretly a girly-girl. I enjoy spending hours doing my hair and makeup when I’m going out with my family, although that’s a rarity for me these days. Still, I’d say I definitely have a bohemian, laid-back style, but I also like colors and prints that let me be me.”