The sock brand's SoHo door features an edited assortment of socks and men’s underwear as well as the Stance Canvas customized product. 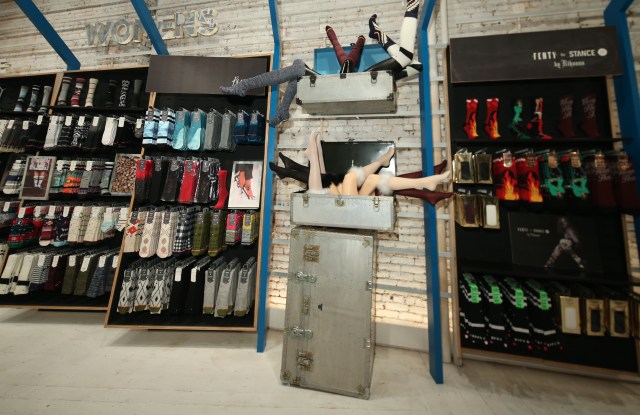 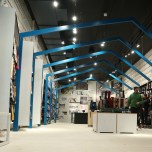 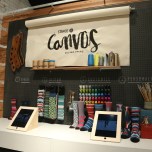 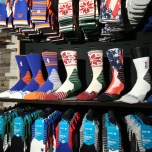 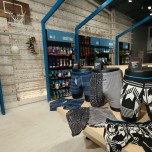 Stance has made its first brick-and-mortar play, just in time for Black Friday.

The buzzy sock brand, which launched in 2010, opened a SoHo store on Monday.

“Two years ago we had a vision to express the brand at retail and we wanted to look at flagship cities that foster art, culture and music. New York City was our first choice,” said Dan Levine, ‎the executive vice president of brand development and retail for Stance.

Located on Broadway between Prince and Broome Streets, the 2,000-square-foot space, which is housed in a landmark building that was constructed in 1912, reflects Stance’s ability to tie socks to a culture and a message that resonates with customers and investors alike. The brand has raised $86 million to date.

Upon entering the shop, customers are greeted with a wall dedicated to Punks and Poets, the term Stance uses for its brand ambassadors that range from artists including Rihanna, who was named a contributing creative director, to athletes such as NBA player James Harden, who recently signed on with the company.

The store is stocked with what Levine called an “annotated curation of collections.” This includes Stance’s NBA socks — the brand signed a deal with the league this year to be the official on-court sock — along with men’s and women’s lifestyle and performance socks and men’s underwear, a newly launched category.

The men’s underwear, which retails from $28 to $36, includes three styles that are made from Butter Blend, a proprietary fabric that includes casein milk protein, which makes the product soft, and an antiroll waistband. The Wholester model, which is one of the three silhouettes, is constructed with an internal support pouch that keeps things in place. Boys’ sizes will be released this spring.

Store associates will be armed with mobile point-of-sale devices and, according to Levine, department store windows from the 80s and 90s inspired the visual merchandising installations peppered throughout the shop. Mannequin legs wearing Rihanna’s holiday collection spill out of a silver trunk, and upside-down feet on pedestals display Star Wars-themed socks. The back wall, which will also change, boasts art from photographer Kassia Meador and artist Russ Pope, who are both Stance brand ambassadors.

“We’re always asking ourselves, ‘How do you take a category that’s commoditized and consistently evolve through great design and product execution?’” said Levine.

The shop also offers Stance’s new custom program, Stance Canvas. Levine said it took Stance a year to develop the ink jet printer, which is on the lower level and visible from the first floor through a glass opening. The printer, which uses dye instead of ink, places custom patterns on socks in a 360-degree process that ensures there’s uniform coverage on the seams. The custom socks, which cost $28, will be shipped directly to the customer’s home. There are two other printers in Stance’s San Clemente, Calif., headquarters. Levine projected the custom business would grow to be sizable.

The lower level includes a lounge space that isn’t open to the public and will be used for marketing events and press previews.

Levine said he’s actively looking for additional store locations in the U.S., and although he was hesitant to offer up concrete store count projections and locations, he did say Stance plans on opening several shops in flagship cities on busy streets and within landmark spaces that are locally relevant.