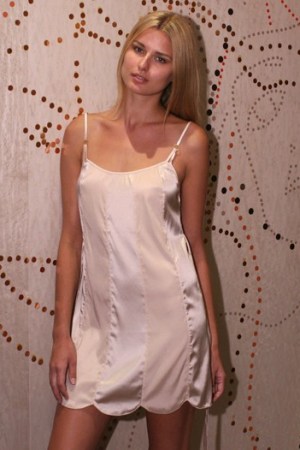 Stella McCartney continues to have a steamy love affair with lingerie.

The designer, a self-described aficionado of undergarments who has had a passion for lingerie since she was a child, will unveil her spring collection of Stella McCartney intimates at the Bendon showrooms today. Licensed to New Zealand-based Bendon Ltd., the first collection was launched in the U.S. in spring 2008.

Each of the 15 groups is named after women in what McCartney describes as cheeky situations, such as Rosie Plotting, a silk chiffon printed range featuring a black-and-white feather print from the Stella McCartney ready-to-wear collection; Eva Scampering, a playful silk chiffon ladybug-printed group with a cami, a chemise and a matching brief; Billie Twirling, a vintage-inspired knicker and chemise with scallop hem of silk satin with a matte-and-shine contrast, and Ines Sneaking, a pale pink lace and silk crepe de chine contour bra, underwire bra and coordinating undies.

The collection, which received strong reaction when previewed to select stores this month, features vintage-inspired styles, detailing, and fabrics such as tulle and mesh. The color palette includes a range of neutral pales, and dusty pink and lavender with accents of ink blue and gray alongside pretty florals and graphic prints.

Distribution in the U.S. is aimed at major stores including Bergdorf Goodman, Barneys New York and Bloomingdale’s; Harvey Nichols, Liberty and Selfridges in the U.K.; Le Bon Marché and Printemps in France; La Rinascente in Italy; Quartier 206, Oberpollinger and Alsterhous in Germany; Lane Crawford in Hong Kong and China; Isetan in Japan, and Bendon stores in Australia and New Zealand.

An annual sales figure was not available, but the collection generated combined wholesale and retail sales of $20 million the first full year, according to industry estimates.

“This season we looked at the Twenties and Fifties, which comes through the range in silhouette and specially developed embroidery and gold retro hardware,” said McCartney, who added she thinks of lingerie as “really handmade precious pieces.” She believes lingerie is important when it comes to making a woman feel beautiful and empowered.

“To me, I feel women are in the right place now where they are a little bit more confident about their bodies in general, and don’t necessarily wear lingerie to only allure men. It’s more about making ourselves happy and about addressing our needs, while also expressing our sexuality,” said McCartney.