The new July date for the lingerie and beachwear trade show and its sister fabric salon Interfilière received mixed reactions from buyers. 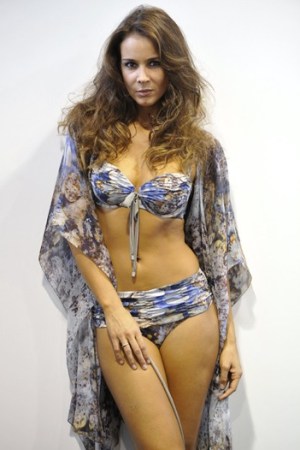 Traditionally held on Labor Day weekend in September, the event was pulled forward to the weekend of July 9 to 11 to coincide with collection launches from brands after six years of debate. It was also the first time that both events had been housed in the same pavilion at the Porte de Versailles exhibition center.

Some 15,200 professionals attended Mode City, according to exhibition director Séverine Marchesi, up 10.5 percent compared with the September edition. Visitors to Interfilière grew 9 percent to just more than 11,800.

“We didn’t know what to expect, since it was the first time,” Marchesi said. “We were waiting to see the reaction of visitors, and that reaction has been very positive.”

The general consensus on the ground was that the new timing was great for those looking for fabrics and fittings at Interfilière — namely private label retailers and the brands themselves — and less so for those shopping for finished products.

“It takes time to change mentalities,” one French brand representative said. “The event has been going on for 26 years, just wait until next year, people will have accepted it by then.”

“The date change is brilliant, because it’s early enough for us to get the fabrics for fall-winter,” said Sian Thomas, design director of the U.K. division of Canadian lingerie retailer La Senza. “We’re working closer to the season, we can see what the trends are and use them,” she added.

“I think it’s good that they brought it forward,” said Sarah Shotton, creative director of Agent Provocateur. “That said, some of the fabric makers are not ready with their offerings yet, which defies the point.”

Others were less keen: “It’s a little bit early because of the time needed to get samples made before the shows in New York,” stated Elizabeth Baxendale, vice president of international sales for U.S. brand Spanx.

Lilia Bondarchuk, a buyer for the 60-strong Estelle Adony lingerie store chain in Russia, said the show clashed with her traditional July appointments with brands in Italy, and she had to make a choice between the two. “It spoils our plans,” she said.

Organizer Eurovet, meanwhile, pulled out all the stops to make the event a success for visitors and brands, including hosting a Champagne reception for 700 VIP guests in a courtyard off the prestigious Place Vendôme.

The party was followed by the Ultra fashion show, which showcased specially created designs from more than 60 lingerie and swimwear brands, three of which — Berlei for materials, Embrace for creativity and Thapelo as the overall favorite — were awarded prizes at the end of the evening by a jury of style experts, buyers and journalists.

At the show, Canadian luxury beachwear brand Shan, winner of the Paris Capitale de la Création Designer of the Year award, was showing its spring-summer 2012 collection. Key sellers for the brand, which has 400 sales points worldwide, were the Anémone collection in an oily grey, purple and blue print, as well as polka dot patterns in eggplant and Caribbean blue, according to European sales manager Polia Memmi. Wholesale prices for Anémone bikinis start at around 80 euros, or $113 at current exchange.

As well as visiting their core brands, buyers were looking for new lines, particularly in shapewear and large cup sizes.

Alice Paparatto, director of merchandising at U.S.-based online intimates store Freshpair.com, said: “We’re researching some different brands that are potentially not available in the U.S.” She picked out U.K.-based line Curvy Kate, which specializes in D to K cup sizes, as a strong offer. Curvy Kate will be launching in the U.S. for spring 2012 with distributor SBC Clothing, and will be attending the Curve show in New York in August for the first time.

The brand, which was launched in 2009, currently has 250 U.K. sales points and will be launching on the Debenhams and Asos Web sites with its new collection.

French brand Chantelle’s president of North American and U.K. business Sonja Winther highlighted the Masculine/Feminine line of pin-striped and Chantilly lace bras and panties as important for the U.S. market for spring-summer 2012. A memory foam bra will wholesale for $78, while undies will sell for $34, she said.

In terms of innovation, Wacoal was showing its first shapewear styles in molded lace. Panties in free-cut lace were another technical milestone for the brand, offering a seamless finish for under light, summer clothing.

Meanwhile, Lycra was showcasing the expansion of its Lycra Beauty certification program into swimwear.

Regarding fabric trends, a forum at the Interfilière highlighted trends for spring-summer 2013 with an accent on brightly colored natural and ethnic themes as well as organic venues.