The lingerie brand is celebrating Bastille Day early with a pop-up this weekend at the Sunset Beach hotel on Shelter Island. 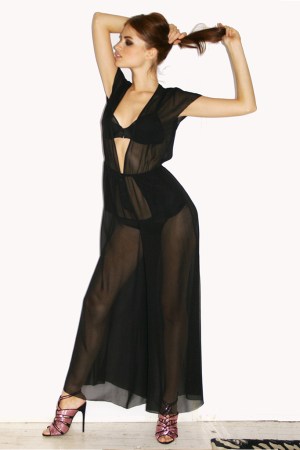 Fleur du Mal is moving its Bastille Day pop-up from SoHo to Shelter Island this year.

The New York-based lingerie brand, which has opened a Bastille Day-themed pop-up in SoHo for the past two years, will host a temporary store at the Sunset Beach hotel from July 10 to 12.

“We’ve done a few different things with André Balazs’ properties,” said Jennifer Zuccarini, Fleur du Mal’s founder. “We even shot our campaign at The Standard at the High Line. It’s our third year celebrating Bastille Day with a pop-up and we thought we would change it up.”

The pop-up will feature panties and T-shirts inspired by Bastille Day, which is July 14, in addition to a kimono, lace tap short, a lace cami, a chiffon jumpsuit and a romper. The line retails from $128 to $595.

Fleur du Mal recently introduced swimwear and before that launched bridal. According to Zuccarini, the brand is focused on growing its ready-to-wear line, working on collaborations and opening a store early next year.

“We are still in the process of looking at locations but we are leaning towards lower SoHo,” said Zuccarini.