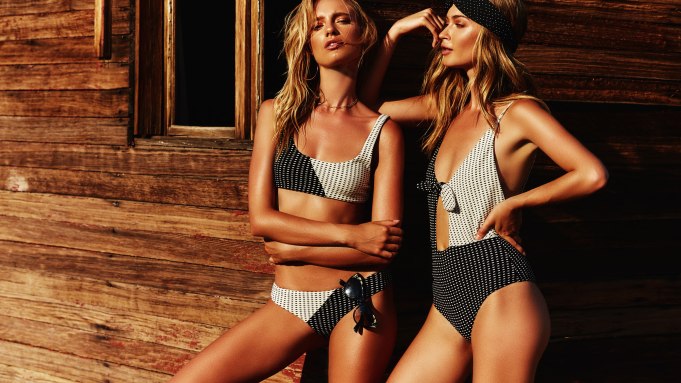 Swimwear and activewear buyers got a leg up on the action and preview of spring 2018 trends during last week’s Swim Collective and Active Collective shows, which wrapped up on Tuesday in Huntington Beach, Calif., ahead of Miami Swim Week.

The shows, which normally take place about two weeks after Miami and in January, moved up on the calendar for the first time due to venue construction during their regularly scheduled dates, giving buyers a chance to concentrate on brands within a smaller show footprint before heading to the Miami sprawl of four shows.

The boutique-like shows, which featured about 222 swim and 200 activewear exhibitors ranging from Gottex to Reebok and emerging brands from Australia and Hawaii, are a key stop for regional buyers as well as majors such as Bergdorf Goodman and Saks Fifth Avenue.

“The theories run different from brand to brand. Here it is orders and in Miami you may be working your advertisements and events. Some are rolling out a specific launch in Miami, but they are able to pre-line with their key buyers here so they can narrow down their lines,” said Roy Turner, senior vice president and show director for organizer Emerald Expositions.

Turner said the need for trade shows that offer face-to-face interaction for businesses and retailers remains, but brands are also looking to push product direct to consumers and gain exposure from influencers and digital marketers who are now invited to trade shows along with specialty retailers.

“A regional influencer is what a specialty retailer has always been. They are becoming social influencers on their own. Maybe their footprint five years from now will be smaller, but their social media outreach will be so much bigger,” he noted.

News at the show included a new licensing partner, Curynt Group, for Tori Praver, the eponymous line founded by the swim model five years ago. “We’re doing some re-branding and elevation of the line, and we’ve condensed it to drive volume,” said creative director Summer Rapp, who showed a dark blue, peach and copper palette, off-the-shoulder tops and lace-up bottoms, all in the under $200 retail range.

Praver and others continued to beef up their après-swim offerings to include cold-shoulder tops, slinky floor-length dresses and matching pant and cropped top sets. At Los Angeles brand Beach Riot, known for its novelty pieces, Nicole Odelwald couldn’t keep the striped rayon high-waisted pants and matching bandeaus in stock.

A more sophisticated, covered-up look seems to have taken hold for 2018. Gone are the Brazilian bottom and tiny triangles of last season. The newest silhouettes were high-waisted bottoms with lace-up, cutout or strappy details on the side, Seventies-style spaghetti strap one-piece suits, athletic-inspired bikini tops and suits with mesh illusion panels. The most popular hues were rust, copper, blush and teal.

“We met Forever 21 and Nasty Gal at this show” in the past, said Kulani Kinis cofounder Alexander Babich. “This time we were approached by Modcloth about our curvy range.” The brand has gained a social media following of 84,000 in two years by tapping top Aussie models for its campaigns. West Coast chain Diane’s Beachwear also found the company on Instagram.

The Active Collective show, which started as an aisle of 10 booths at Swim Collective in 2014, has since grown into a stand-alone show with nearly 200 exhibitors. Stores buying into ath-leisure were on the lookout for high-end pieces that could be worn from gym to street, and the offering was increasingly more sophisticated, with faux shearling jackets from Varley, cotton mesh dresses from Electric & Rose and copper foil bombers from Heroine Sport — all brands from Los Angeles.

“We’ve really hit our stride and found our niche,” said Electric & Rose founder, actor Eric Balfour. “It’s hard to believe we are at the same show as the guys from Hard Tail, who really started this whole category.”

Among the top new trends in active were all-white pieces or white-ground prints such as marble and snake, deep V-neck sports bras, oversize jackets and 7/8 length leggings with sheer panels. Allover prints seemed to be on the wane with larger placement prints or printed panels strategically placed. As with swimwear, textures such as ribbing, velvet finishes, mesh and foil offered subtle newness.

Lexi Soukoreff, who started her Daub Design line of hand-dyed leggings seven years ago, has watched the activewear market take off. “I’m now making a photo-print version of the tie-dyed pieces that’s for working out, because the demand was there.”