A year of solid growth and a plethora of new lines has the swimwear industry buzzing. 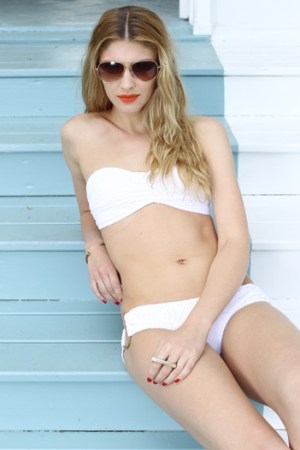 The $4.5 billion swimwear industry is set to kick off the cruise 2011 and spring 2012 seasons with a slew of new lines and collections at major swim shows in Miami, as well as at venues in New York and Las Vegas.

The tough economy didn’t seem to hamper U.S. sales of women’s swimwear, which increased 5.3 percent to $2.58 billion from May 2010 through April 2011, according to consumer research firm The NPD Group Inc. Specialty stores garnered the heftiest gain, 12.2 percent, followed by an 8.7 percent spike at mass merchants, while off-price and factory outlets scored a 4.9 percent gain. Sales at national chains and department stores grew 3.8 and 3.6 percent, respectively.

Following a strong preview week in June at showrooms in New York and on the West Coast, industry executives said they’re bullish about sales in the fourth quarter and the first half of 2012. Now regarded as a year-round business, particularly at specialty stores, vendors are increasingly offering core replenishment styles and colors for immediate deliveries as well as larger assortments of key fashion items in a wide range of colors, prints and silhouettes.

Top trends include bright and pastel neon shades with a Seventies flavor; a sportswear-inspired palette of taupe and khaki; bold and colorful floral and graphic prints against contrasting grounds, and high-tech applications and fabrics that are odor-resistant and prevent chlorine and salt water fade-out. There’s also a strong influence of shapewear and lingerie touches such as molded bra cups.

• The growing popularity of water aerobics, especially among Baby Boomers.

• Dual-purpose items like cover-ups that have a look of casual sportswear.

One world-class event is expected to further bolster swimwear business next year, said Jim Gerson, president of Speedo USA, a unit of The Warnaco Group Inc.: the Summer Olympic Games. The Games are scheduled in London July 27 to Aug. 11, 2012.

“The industry is seeing increases with the popularity of low-impact, high-aerobic workouts in the water, but we’re coming into an Olympic year, and that will certainly influence business,” said Gerson. “The inspiration for Speedo’s Team USA is red, white and blue, with Olympic athletes Michael Phelps and Natalie Coughlin, and we’ll be introducing a whole new marketing and product story. We’ll also be launching ck one Swimwear [produced for Calvin Klein Inc. and Coty under license by Warnaco] at the Miami SwimShow in July.”

Underscoring the strength of the overall swimwear business, which executives expect will generate sales increases of 10 percent or more in 2012, are the bevy of brand launches at major trade fairs over the next two months. Besides ck one, launches include Natori Swim, licensed by Parisa USA; the licensed Jones New York label made by Amerex Inc.; Cocoa Contours by Swimwear Anywhere Inc.; Eco Swim by Aqua Green, and “Dancing With the Stars” costume designer Randall Christensen for Miraclesuit, both at Mainstream Inc. Spreegirl, a Los Angeles-based sleep and loungewear line, will make its first foray into swimwear, as well as Elomi, a British bra brand that will make its debut at the Miami SwimShow.

The licensed Tommy Hilfiger swimwear line will relaunch at a presentation in New York in September, said Rosemarie DiLorenzo, co-founder and chief creative officer of Swimwear Anywhere, which produces it.

Meanwhile, a lot of action is expected at trade fairs including The SwimShow, organized by the Swimwear Association of Florida, July 16 to 19, at the Miami Beach Convention Center; the Mercedes-Benz Fashion Week Swim and Swim Show 2011, at The Raleigh Hotel in South Beach, Miami, which will be staged July 14 to 18, and Salon Allure, at the W Hotel, July 16 to 19.

There are two new venues — the So Curve So Swim fair in New York, July 31 to Aug. 2, at the Jacob K. Javits Convention Center, and its sister edition at The Venetian hotel in Las Vegas from Aug. 22 to 24. The So Curve So Swim shows will run concurrently with the Curve lingerie fairs in their respective cities.

Sizing up the swimwear industry, Judy Stein, executive director of the SAF, described it as “stronger than ever.”

“The market has been resilient throughout the recession, and is one of the three best-performing categories in the apparel industry,” said Stein. “Men’s swimwear last season [recorded] a robust 20 percent gain in sales. More manufacturers were showing larger selections of smaller briefs and taking advantage of the resurgence in the men’s market. The children’s category also did exceptionally well.”

She continued, “Innovation is the buzz word that keeps coming up this season. So many brands are introducing new fabrics, new hardware, eco-friendly and sustainable designs and manufacturing processes.…We have over 80 first-time exhibitors, many with multiple lines. We expect 10 to 15 percent growth in attendance overall.”

The SwimShow will feature more than 350 exhibitors and 2,000 collections, including 30 lingerie lines, and Stein expects more than 7,500 buyers and press to attend.

“It’s definitely turned into more of an international event, and 45 percent of our designers are from international markets, a little more than usual. This year, we have three Australian designers, four from Brazil and one designer [each] from Colombia, Costa Rica, Peru, Spain and Canada,” said Neault. “We also get a lot of international and South American press at this event.” She added that 25 designer brands will be featured in 19 fashion shows, 17 of which will showcase individual designers.

Meanwhile, the year-old trade show Salon Allure, with more than 30 designer brands, has sold out its venue at the W Hotel. This year’s edition will have a larger format on the fifth floor and will include high-end accessories and jewelry brands that “enhance the luxury resort feel of the show,” said Rick Fatzinger, event producer.

New exhibitors include an array of labels from Australia, Hawaii, England, Colombia, Mexico, Kuwait and the United Arab Emirates. The show features upscale labels that retail over $100 and caters to major specialty stores, upscale boutiques and luxury hotels in the Caribbean.

“We’re adding different elements this year that combine fashion and art. We’ve partnered with The Arts Fund, which will provide artwork to brighten the floor, and Invista will be a sponsor for a second year with imagery as well,” said Fatzinger. “We’ll also have live art performances at our daily happy hours from 4:30 to 6 p.m., and Lebo, a popular artist in Miami, will paint to a music selection by our DJ at the opening-night party, on July 16.”

The kickoff party and fashion show for 1,000 guests will be staged in the Wet lounge of the W Hotel and feature a runway show over the pool.

About the launch of the So Curve So Swim fairs, Laurence Teinturier, executive vice president of CurvExpo Inc., said, “Swimwear is such a strong category that we had to create a new venue for the many brands that want to exhibit in New York, a city that has no trade fair dedicated to swimwear. It is also a natural extension of lingerie, making it the perfect fit for us. So far, we have over 70 swimwear brands for the New York show and more than 100 for Las Vegas.”

This year, Invista Inc., maker of Xtra Life Lycra spandex fiber, will be a sponsor at SwimShow and Salon Allure, and will be a presenting sponsor of the Red Carter fashion show by Mercedes-Benz at The Raleigh Hotel.

“Our research confirms that today’s consumers…are eager for information that shows why a garment is a better value,” said Lober.

Vendors concurred that business was solid and cited a number of reasons. Rosemarie DiLorenzo, of Swimwear Anywhere, said a new generation of fibers and fabrics has made swimwear stylish and comfortable.

“We now have Meryl, Tactel, Lycra and a variety of microfibers, as well as circular knits that are more forgiving and comfortable. Years ago, there was only tricot,” explained DiLorenzo. “Swimwear Anywhere is having a very good year in all divisions, whether fashion or swimwear with bra [cup] sizing. We’re also in a brighter time with color — neons are coming back, and more designers are working with colorblocking and prints and textiles.

“We continue to add designer lines and will have several new names over the next couple of months,” DiLorenzo added, projecting sales gains of 5 to 10 percent over the next year.

Josie Natori, president and chief executive officer of the Natori Co., said the influence of her lingerie prints, colors and styling was easily translated into the company’s first swimwear collection.

“The customer who has been wearing Natori bras will know that my swimwear will fit them the same way.…Eighty percent of silhouettes in the collection have seamless, molded bra cups in sizes 32B to 38DD,” said Natori. “We are hearing from retailers that our prints, like Asian-inspired florals, will make the collection stand out.”

Addressing intimate apparel trends in swimwear, Sandra Davidoff, director of corporate communications at Mainstream, which has the Miraclesuit brand and the licensed Reebok and Caribbean Joe labels, singled out a top-selling classification: cover-ups.

“Cover-ups are huge and we are seeing some beautiful increases. The classification has been on the upswing for the past two to three years.…If the item is right, the consumer will pay for it because it’s ensemble dressing and multipurpose. She can buy one cover-up and wear it with any swimsuit and also wear it as day-into-night apparel,” said Davidoff.

She added that in late June, the company launched its ecoswim.com Web site, an environmental initiative to “reduce your carbon footprint in the sand, and support the introduction of the Eco Swim by Aqua Green brand.”

Meanwhile, a number of swimwear brands will be exhibiting at hotels or boutiques in Miami. It’s a trend that’s been growing since 2009, said Guido Campello, vice president of sales, innovation and marketing for Cosabella Mare swimwear and Cosabella lingerie.

“A lot of designers rent hotel suites, and all of the hotels, like the W, The Webster, The Gansevoort, The Setai, and The Raleigh, now have their own shows,” said Campello. “We do it out of our store in Miami, so we ask retailers to give us their taxi receipts to be reimbursed. We take them to breakfast, lunch, or dinner, whenever they get here. This eliminates the browser, which we don’t get anymore.”