Triangl is the biggest swimsuit e-tailer you’ve never heard of. 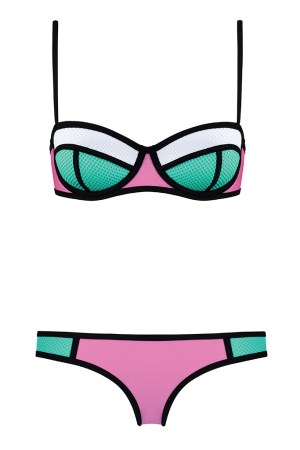 Triangl is the biggest swimsuit e-tailer you’ve never heard of.

The direct-to-consumer brand, founded in 2013 by Craig Ellis and Erin Deering, is aiming at more than $60 million in sales this year. Neoprene bandeau, triangle and balconette silhouettes retail from $79 to $89 and come in saturated, color-block styles with net or crochet detailing. Triangl has amassed 2.6 million followers on Instagram, and counts social media influencers like Kayla Itsines, the Australian fitness phenom with a cult Instagram following of 3.2 million, as a fan. The brand even caused a stir on social media last month when consumers voiced that Victoria’s Secret’s new suits bore a striking resemblance to Triangl’s signature styles. Stars including Beyoncé, Kendall Jenner, Miley Cyrus, Shay Mitchell and Chanel Iman have all Instagrammed themselves wearing the suits.

“The logic was to get started as quickly and with as small a budget as possible, get feedback and refine product,” Ellis said. “We did a really small production run [in nylon and spandex] — we did OK, but not amazing. Then we switched to Neoprene. The response to that was really good.”

So good that the company is on track to more than double the $25 million it did in sales last year.

Ellis said he and Deering, who are now engaged, were “flat broke” at the end of 2012, after relocating from their native Australia to Hong Kong for a design job that didn’t pan out. (They’ve since relocated to Monaco.) They borrowed $20,000 from friends to start a line of swimsuits, specifically bikinis retailing under $100, because Deering couldn’t find one she liked at that price.

They paid back the loan several months after launch and haven’t needed to raise further capital. Helped by the accessible pricing and social media splash, Triangl is on pace to sell more than a million bikinis by year’s end.

The suits are sold online only at Triangl.com, and Ellis has no plans for physical stores or wholesale. The e-commerce model has allowed Triangl to thrive, and after setting up a supply chain in Hong Kong, lead time on production is now just seven days.

“Retail is not on our radar; we have a lot more potential to grow online before physical stores,” Ellis said. “Just given the complexity [of bricks-andmortar] – it’s a completely different business model and we would have to bring on partners. We love how quick we can be to market.”