Tennis player James Blake, who will play the U.S. Open at the end of this month, is also launching a men’s apparel collection with Fila. 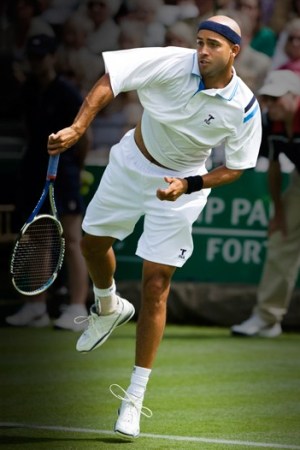 James Blake will have more than just his serve on his mind when the U.S. Open kicks off in Flushing, N.Y., on Aug. 31. He’s also using the tournament as the opportunity to launch his new men’s apparel collection with Fila.

The line, which sports an R-dot logo, is named after Blake’s father, Thomas Reynolds Blake, who died in 2004 after battling lung and stomach cancer. That same year, Blake broke his neck in a freak accident during a match, and then wound up with a nasty case of shingles that caused temporary paralysis of his face. “It was a tough year for me to come back from,” he told WWD, “but I actually improved my ranking when I returned.”

Ranked number 10 in the world, Blake said the chance to create his own apparel collection “sealed the deal” for him when he was negotiating with Fila. “This is something that I really care about for my career and hopefully beyond that. I hope it will endure a little longer than my body.”

Although he had considered several names for the collection, he opted for Thomas Reynolds as a tribute to his father, whom he credits for teaching him the values that have led to his success both on and off the court.

The name is also simple, a style hallmark of the collection. Blake said he was deeply involved with the design of the line. “It was fun, but it was also time-consuming,” he said, noting he worked not only on the name, but also the logo, color scheme, stitching, material choice and fit. “I’ve been on tour for 10 years so I’ve seen a lot of dos and don’ts of fashion,” he said.

Blake himself likes to be comfortable and also look professional and opts for a “somewhat classic look. I’ve worn sleeveless shirts but I prefer the traditional look.”

For the first season, the line will be just performance tennis apparel, but it will be expanded for spring 2010 to lifestyle product, which will be designed in collaboration with Fila’s European staff. The collection will also offer footwear, golfwear and accessories. Prices for the current season are crew shirts for $45 to $48, polos for $55, shorts for $45, hooked jackets for $65 and pants for $55.

Blake said he’s “partial to the Carolina blue collared shirt,” a color that’s become his trademark and that derives from his longtime admiration for Michael Jordan. The shirt is also a nod to the “tradition of Fila” and tennis legend Björn Borg. The linear Fila trademark will be on the left chest of the garment.

Blake will be featured in the marketing materials and in-store graphics for the collection. The launch will be advertised in Tennis Magazine’s U.S. Open issue.

Off the court, Blake said he “goes back and forth” between wearing jeans and T-shirts or dressing up in a nice button-down shirt or V-neck sweater. “I wear a lot of Hugo Boss,” he said. “They make great men’s clothes. They fit right and they’re neither superconservative nor outlandish.”

Turning to the upcoming U.S. Open, Blake said he never goes into a tournament with expectations and will just “try to do my best, whether that’s the second round, the finals or the win. I just want to be as prepared as possible.”