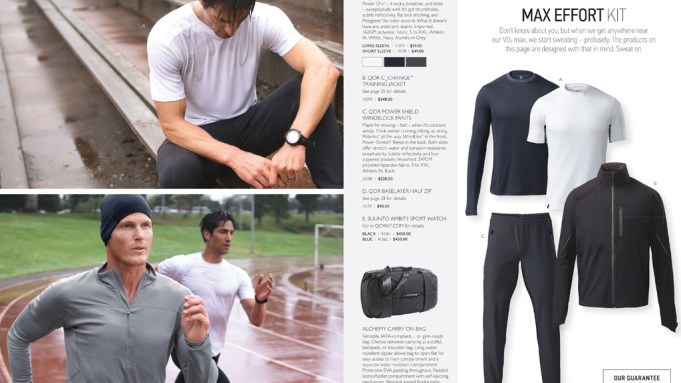 The concept may not be revolutionary — it’s the backstory that makes Qor interesting.

The newly created vertical brand targets men seeking apparel that performs well in the gym but also is appropriate for the office. The idea, which feeds off the trend in the women’s market to sport yoga clothes all day, is gaining a foothold in the men’s arena, as well. Brands at all levels of the market are embracing the athletic trend, offering technical fabrics and casual silhouettes that blend seamlessly with more tailored pieces.

The first thing that sets this brand apart is its management team. Chief executive officer Joe Teno was the former ceo of Athleta, which was sold to Gap Inc. for $150 million in 2008. He also worked at L.L. Bean for 13 years and TravelSmith for two. Teno’s chief merchandising officer is Kelly Cooper, who had been Athleta’s vice president of merchandise, design and product development.

Teno stayed with the company for about three years after the ownership change, then sailed off into the sunset in Maine. “But that wasn’t good enough,” he said. “I started thinking about the men’s equivalent of that women’s active company. I had a few reservations, but the more research I did, the more intrigued I became.” So, he phoned his old design guru last summer and suggested they start a company.

Both avid athletes — Teno is a former Green Beret and a competitive runner who has climbed Mount Rainier, while Cooper is into CrossFit and hiking — they cooked up the idea of a new men’s wear brand designed to inspire guys to be more active. The result is Qor — pronounced like “core” — which came to life in a small office in the Northern California town of Petaluma. The company’s Web site quietly went live last week, and the first catalogue is in the mail.

Their idea, which centers around modern men’s wear in technical, outdoor fabrics with street styling, caught the eye of some big names in the apparel industry. The lead investor is Bippy Siegal, founder and ceo of Raycliff Capital, who put together a group of other high-profile investors, such as John Howard, ceo of Irving Place Capital, and advisers, including Millard “Mickey” Drexler, ceo of J. Crew. Board members include Bill End, the former ceo of L.L. Bean and Lands’ End, as well as Bruce Willard, the former ceo of Sundance Catalog.

In his understated manner, Teno said of the team: “We have an industry-savvy board of directors and investors.”

Drexler said he first met Teno and Cooper when they were at Athleta about 15 years ago. “I enjoy visiting companies that are doing something interesting, and [Athleta] was in its infancy,” he said.

So, when he heard that the two had an idea for a men’s business, he was intrigued. “I like what they’re doing, and I like the concept,” Drexler said. “What sets any new company apart is the vision and the passion the founders have. You can’t measure that in goods. It really speaks to the vision.”

Drexler acknowledged that the merchandise “will, hopefully, set it apart.” Do they have the technology, style and a “point of view?” he asked. If so, “that will end up as the differentiating factor.” But as with any start-up, he said, “time will tell. But the right ingredients [for any successful business] are the people, the vision and the right investors.”

At least at the start, Qor seems to have all those ingredients lined up. With this backdrop, Teno and Cooper drew on their expertise in design, sourcing and production and spent a year creating an extensive product line with the bells and whistles they hope will enable them to create a splash in the active-inspired men’s market.

“The overriding theme is urban first and mountain second,” said Cooper. “You can wear it crosstown or on the trail.”

Targeted to “active men who spend a significant amount of their free time running, hiking, bicycling, practicing yoga, cross-country skiing and snowshoeing,” the collection is separated into “kits,” a term used in the activewear market to describe a set of pieces for a particular purpose designed to be worn together as a complete look. Qor’s versions include Urban, Trail, Core Workout, Active Commuter, Recovery and Gym kits.

“We serendipitously came upon the concept of kits,” Cooper said. “Joe loved the concept and thought it was revolutionary and really different.”

The kits also lead to multiple sales if a customer opts in for the entire collection. “It makes it really easy,” Cooper said. The kit concept also plays into the trend of layering. The Active Commuter kit, for example, offers a long-sleeve, crewneck base layer, a button-down shirt, a performance blazer, a bike short and a performance dress pant. There’s also a base-layer watch, backpack and a couple of bracelets thrown in for good measure.

A large portion of the line is merino wool. “We weren’t sure how men would respond,” said Teno. “But it’s selling. Merino has such versatility.”

Other fabrics used in the line include polyester, nylon and cotton. “After you’ve just run a marathon, there’s nothing better than cotton for recovery,” Cooper said.

The fits are “generous,” she said, but not as big as many outdoor brands or as skinny as designer labels. “It’s a subtle thing, but I think we nailed it,” she said. “It will fit a broad range of people.”

The sizes go all the way up to 2X in an attempt to capture the big-men’s market and act as a differentiator.

Teno and Cooper look at the traditional outdoor brands, such as Patagonia, as their prime competitors. However, brands from Under Armour and Ralph Lauren to REI are also rushing to tap into the activewear trend. Cooper believes that Qor’s styling is more contemporary and that its performance attributes give the brand a leg up. “We’re not just doing handsome stuff, but it works, too,” she said. Custom trims, reflective detailing and logoed zippers are all part of the line, as are fabrics from performance experts such as Polartec. “We wanted everything to be authentic and have the desired functionality but also look good,” Teno said.

Qor’s pricing matches its competitors’ and includes the performance blazer at $298, the base-layer crew at $79, a plaid tech shirt at $118, a merino Henley at $128, a thermal cashmere hoodie at $398, heavyweight fleece sweatpants at $118, merino trousers at $228 and a performance suit pant at $198. Cooper acknowledged that there is a “macrotrend” in the men’s market toward athletic clothing, but most of the designer merchandise is “significantly more expensive.”

Qor’s initial offering is about 70 pieces. It is manufactured in Asia, Europe and America.

Cooper said it’s her “MO” to offer a full collection, everything from underwear to outerwear, although, unlike Qor’s competitors, most of the products are offered in only two colors.

“To really address the concept, you have to go with all the layers,” she said. “And we wanted to go with multisport. So we’re addressing [all aspects of] his lifestyle. Most start-ups are only 12 styles, so this is a very aggressive launch line. But we thought we’d throw it out there and see what sticks.”

Teno and Cooper believe Qor’s advantage comes from their backgrounds. “This [brand] is not Athleta 2 but has its own personality,” Cooper said.

To reach potential customers, most of whom are between 22 and 50 years old, Qor has launched its own e-commerce site, qorkit.com, and also has embraced catalogues as a sales tool. With Teno’s and the board’s background, this should come as no surprise. “Most people are moving toward the Web and think catalogues don’t have a place,” Teno said. “That opens up more of a runway for us. We like them, and we think we’re really good at them. We’ve found that [using] catalogues in conjunction with the Web is powerful.”

“It’s a quick and efficient way to get into households,” Cooper added. “It’s very targeted, and it works.”

The initial catalogue was sent to about 100,000 names that Qor obtained from a national database — people who would “appreciate the offer,” Teno said.

There are no plans to wholesale, but the team is hoping to add a brick-and-mortar presence. Teno said he’s considering a pop-up store in San Francisco, which is close to Petaluma, that could open as early as spring. “We want to see how it works out,” he said.