The Royal Road to Sheer Hosiery

A growing demand for fashionable, comfortable sheer hosiery by young European women is expected to cross over to the U.S. this fall. 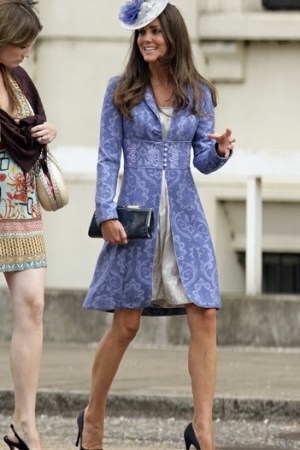 Sheer hosiery has become a royal favorite thanks to Catherine, Duchess of Cambridge, and her sister, Pippa Middleton.

It all began after Kate’s engagement to Prince William last fall, when the world began watching every fashion item the soon-to-be-royal wore, including legwear. Her choice for all occasions, including her recent visits to Canada and Los Angeles, was matte and shiny nude-tone sheer hosiery. Pippa is following suit with barely-there transparent sheers.

Sheer legs have also been spotted on a host of celebs such as Mischa Barton, Hayden Panettiere and Sarah Jessica Parker over the past several months. And a growing demand for fashionable, comfortable sheer hosiery by young European women who want to have a polished head-to-toe look is expected to cross over to the U.S. this fall, said executives.

“The royal buzz is really helping us and all signs indicate we [sheer hosiery] will have a very positive fall,” said Angela Hawkins, general manager of hosiery brands including Hanes and L’eggs at Hanesbrands Inc. “Sales in the U.K. of sheer hosiery or what they call ‘new tights’ have soared 85 percent over the past year.”

Hawkins believes the growing popularity of sheers will transfer to the U.S., where the sheer hosiery business has been on the decline since the early Nineties.

“We frequently see trends emanating from Europe and this should be no different. There has been a slow but steady increase in younger women wearing sheer hosiery. We’ll see where the royal road takes us,” said Hawkins.

Catrinel Popa, vice president of design at Kayser-Roth Hosiery, said the demand for sheers is already translating to the U.S. market.

“In May, bookings for sheer hosiery were up 12 percent…The demand for very sheer, nude and transparent looks is not an accident — it’s being driven by London and it’s all about being very elegant,” said Popa.

“Beautiful feminine looks will continue through fall 2012. The dress and the complete ensemble are very important, and incorporating hosiery like Kate has done makes it the ultimate accessory,” said Moxham.

But pulling off the bare leg look is not always easy, said Moxham. Hanes Hosiery launched Silk Reflections Ultra Sheer this year, which incorporates a run-resistant technology while providing a sleek, bare look.

The rekindled interest in sheer hosiery comes as no surprise to Valerie A. Mackie, marketing director for legwear at Invista Inc., who projected a “renaissance” last fall.

“I think what’s fueling the renewed interest is a younger consumer who hasn’t worn hosiery in the past…that’s why thigh highs are so strong at Victoria’s Secret, with the Silks brand in Canada, and in countries like Spain, where thigh highs represent as much as 50 percent of total sheer hosiery business,” said Mackie.

From a retailer’s perspective, Maureen Stabnau, senior vice president of merchandising at barenecessities.com., said, “Our sheer hosiery business is continuing to grow…What’s really interesting is Kate and Pippa are very fashionable, very contemporary, and it’s the contemporary fashion [hosiery] brands that are seeing the increases right now — Calvin Klein, Donna Karan Nudes and Assets by Sara Blakely….I see this as an opportunity and it bodes well for a successful fall season.”

Kerry O’Brien, founder and designer of Commando lingerie and legwear, said the company will show additional 10-denier ultrasheers at the spring 2012 market in August because of building demand.

“We’re seeing sheers on more and more celebrities as well as on fashion runways, lots of mattes and shiny sheers. We call it the buttered leg effect because you really can’t tell if they’re wearing sheers or not.”