Tory Sport Gets in the Game 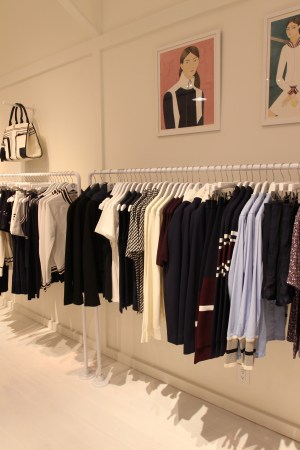 On Wednesday, Tory Burch will open a Tory Sport pop-up shop at 257 Elizabeth Street, the same location where she launched her apparel and accessories company 11 years ago. Tory Sport will also be available exclusively at torysport.com. A permanent location in the Flatiron District at 129 Fifth Avenue is expected to open in March.

A performance-wear collection with a retro chic vibe, Tory Sport features clothing, bags, shoes and accessories for running, studio, tennis, golf and swim, as well as Coming & Going, a category of pieces that can be worn before and after a workout. Retail prices range from $55 for performance tops to $550 for outerwear.

The activewear market has ramped up in the last few years, with designers including Cynthia Rowley, Rebecca Minkoff, Ramy Brook and Elie Tahari jumping into the fray. All are looking to give a fashion spin to a growing market, dominated by players such as Nike, Under Armour and Adidas — which has its Stella McCartney line — not to mention the likes of Lululemon, Puma and Reebok. One could ask whether Burch is late to the game.

“It’s not a trend, it’s a shift in the way women are dressing. Women are wearing sport clothes throughout the day and even into the evening,” said Burch, chairman and co-chief executive officer.

But the designer stressed her collection is aimed at women who actively participate in sports, with a strong fashion edge, rather than at the booming “ath-leisure” sector.

“It was another start-up. It’s a whole new concept, a different logo [a graphic take on ‘T’] and a different aesthetic. It’s function meets real style,” said Burch of the reason it took her so long to introduce the collection.

The collection will also launch with a small assortment of footwear — including foldable ballet flats with rubber soles for working out — which the company is producing itself. A host of accessories, such as gym bags, makeup cases, iPhone cases, and tennis bags with a compartment for a racquet, three mesh pockets for ball cans, a detachable insulated water-bottle holder and plenty of room for clothes and other necessities, are being offered.

Among the fabric’s features are quick dry, wicking, waterproof and SPF. High performance yarns are blended with Coolmax. In total, there are 151 styles and 256 stockkeeping units in the collection. The pop-up shop will house the entire line, and there will be two deliveries online for fall, with fresh deliveries every six weeks.

“Working on this collection inspired some sportier elements in the main line as well,” said Burch, who will show her spring collection Tuesday. Tory Sport won’t be included on the runway or sold at the Tory Burch stores. Burch, an avid tennis player, said the company has had conversations with a department store about carrying the line, but for now, it’s going to be e-commerce driven. The creative agency Wednesday developed the Web site and the marketing campaign, along with Burch’s in-house team. The Tory Sport Web site will be divided into several categories: Clothing, Accessories, and Shop by Sport, as well as a Tory’s Pro Shop blog. Shipping will be offered to 16 countries.

The 1,200-square-foot pop-up shop was designed by Burch, in partnership with Kate McCollough, serving up a modern take on old country club glamor. The exterior has a white stucco facade, with a blue awning piped with white scalloped edges, white latticework and blue doors. With a cool, athletic vibe, crisp white board and batten walls, wainscoting and wide-plank floors are painted with a logo-inspired T. Among the decorative details are courtside seats and canvas-covered armchairs accented with blue and green varsity stripes and a graphic surfboard on the wall. Artist Kelly Marie Beeman was commissioned to do four paintings. The shop will also feature a monogramming station and vinyl letterpress where customers can have select styles personalized with their initials. A custom vending machine will dispense vintage sport magazines, golf balls, tennis balls, Frisbees and water bottles.

Burch, whose company is expected to generate sales in excess of $1 billion this year, according to sources, declined to reveal estimates for the collection’s first-year volume. “I hope to sell through the inventory,” she said.

Ultimately, Burch would like to open a freestanding store or pop-up for the line in Los Angeles, and is considering San Francisco, Florida and Texas, and eventually Japan and the U.K. Tory Burch has 163 stores globally, and 77 in the U.S. Last year, Burch introduced a line of accessories for the Fitbit Flex activity-tracking device. She will have that for Tory Sport, as well.

Asked what’s next after the long-awaited launch of Tory Sport, Burch said there’s nothing on the agenda right now. “I’m happy to work on this business. This has been such as labor of love, the team has done an extraordinary job. We’re pretty good for now,” she said.