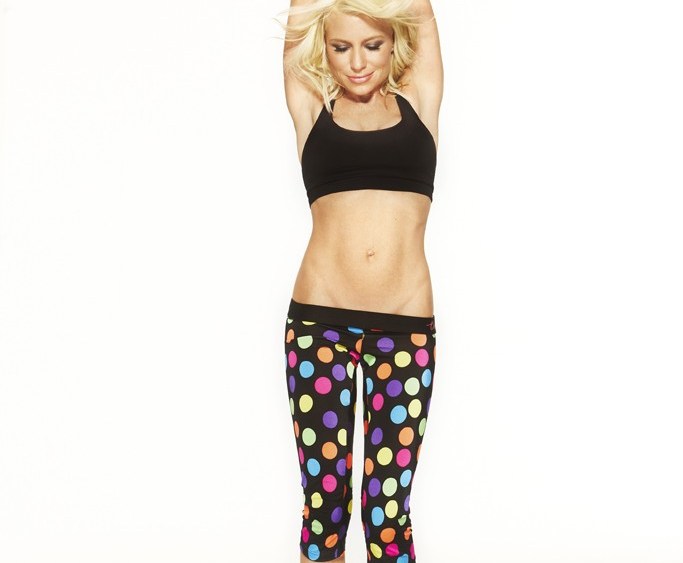 The colorfully patterned leggings, which will be available at tracyandersonmethod.com, retail for $60. They are made of 85 percent nylon and 15 percent Lycra spandex.

Anderson, who recently opened an 8,500-square-foot flagship studio designed by Windsor Smith in Brentwood, Calif., is in partnership with Gwyneth Paltrow on all her fitness projects.

“I did a special collection for Edition01 which were all-black leggings [$125] and everyone freaked out. They said, ‘You always wear the coolest patterns and shapes and colors and the right materials.’ I really like to keep a pulse on my audience. Affordable leggings are something I would wear, so I decided to give that to them,” said Anderson.

“The leggings are youthful and fun. The leggings are black with bright bubble-gum polka dots on them, and one is a tartan plaid and one’s sparkly,” said Anderson, in a telephone interview from her L.A. studio.

The leggings, which are 6 oz., have a compression fit that keeps everything tight to the body for maximum support during high-performance activity. They are made of a four-way stretch fabric and have a smooth, wide waistband, inseam gusset and flat seams to reduce chafing.

“When I work out, I don’t care about things being moisture wicked. I like the Lycra spandex very thin. They’re supportive, but not too supportive to where you can’t move and feel you can exercise properly. When you’re exercising you’re supposed to be able to not feel constricted. People show up in pants basically like Spanx, but that’s not the appropriate way to allow for circulation and movement,” she explained.

Right now the leggings are only available on Anderson’s Web site, but they hope to eventually sell them to retailers.

Asked about a first-year volume projection, she said: “I have projections on how many bodies I need to change. I haven’t even thought about that. I’d put them in every Target if it’s going to inspire people to move.”

Anderson said she’s also offering tops — hot pink, black and gray — and sports bras, and she hopes to eventually add sweatpants “which I live in,” as well as other product categories. Tanks retail for $39.50; the sports bras are $29.99, and T-shirts range from $11 to $15.

She said she and Paltrow are partners in everything. “She signs off on everything. We’re equal partners. In the Brentwood Studio, she picked every single thing herself,” said Anderson. This summer, they will open a clothing store next to her Brentwood studio that will feature five or six designers at a time. “It will be lifestyle oriented. It will be whatever we love. It’s for the working mom who has an exercise lifestyle. I’m not going to be selling Alexander McQueen dresses,” said Anderson.

Anderson said she and Paltrow are developing two TV shows right now. “We’re going into production on one,” she said. It’s an exercise show but she’s not able to talk about them yet.