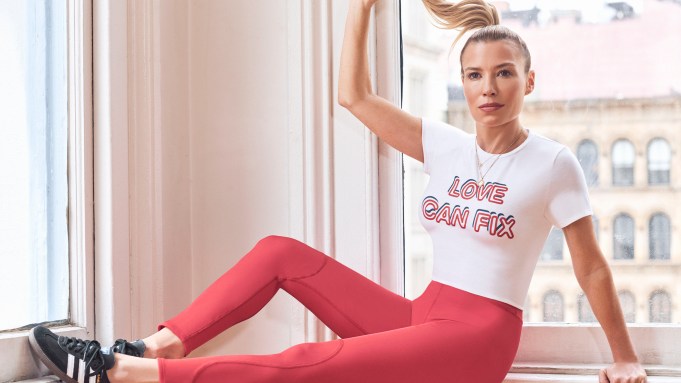 Tracy Anderson, the fitness entrepreneur, celebrity trainer and author, has teamed with Barneys New York for a fitness capsule. Representing Anderson’s first fitness line exclusively for a major retailer, the collection will reach Barneys stores and barneys.com on July 8.

Barneys approached Anderson to develop the line, which is inspired by her personal style in and out of the studio. Barneys met with Anderson in the initial design process and drew inspiration from the pieces and colors she likes to wear personally. The collection also features sayings on some of the Ts and pants that are particularly meaningful to her.

The entire collection is produced in Los Angeles.

“This is the first time I’ve ever partnered with a big retailer,” said Anderson. “I’ve talked about it for a long time, but as you know, I’m careful about partnerships. Barneys actually approached me to do a full line with them.”

Anderson said one thing that’s important to her is that she doesn’t just lend her name, but collaborates on everything.

“When I met with Barneys, it was a different kind of meeting.…They really wanted to build a line from scratch with me, and get to know me, what I like, what I feel like and what’s important when you’re suiting up to work out,” said Anderson.

Among the styles is a baseball T-shirt that has a heart and reads “full,” and another T-shirt that reads, “Love Can Fix.”

“It doesn’t matter what body type you are. I think people misidentify feeling that they don’t feel comfortable in their skin or aren’t their ideal weight, they have to cover up in a lot of fabric. I really disagree with it. I think if a T-shirt is made really tailored and clean it can make really anyone feel more balanced. To have a lot of material when you’re trying to  move and work out can be a distraction,” said Anderson.

She said the line includes leggings, a bodysuit and halter tops that are sports bras. “It’s a style that’s very signature to me.” She said there’s also a full-on sweat suit.

“It all works together. It feels like a uniform that you’re suiting up to be a part of a team,” said Anderson. There’s a bit of a patriotic aspect because there’s a lot of red, white and blue in the sweat suit, which says, “Tabula Rasa.”

Anderson said the deal with Barneys is for one season for now. “Everyone hopes it will continue,” she said.

As for whether the line can be worn outside the studio, Anderson said some of the T-shirts “are super cute with jeans,” and the sweat suit can also be worn. The collection won’t be available in Anderson’s studios.

Anderson plans to actively promote the line. “They know that I’m game to get behind it. A lot of the statements we make will be a digital conversation through social media. It’s definitely a possibility that we may do some events,” said Anderson, who plans to wear the line at her studio. “I was so sad when I did the photo shoot for it and I had to give the samples back. I can’t wait to wear it,” she said.

Asked if it’s different from other things she’s worn, she said, “It’s like my dream pieces that I get to wear. Every single day I show up and I have to wear fitness clothes,” she said.

“I’ve done things that are fun, and a moment in time. For me, these are classic pieces that reflect who I am,” she said.