The immersive experience space is intended to promote the Rush line of apparel.

The brand created a documentary for the apparel collection featuring three of its sponsored athletes.

Want to train like Stephen Curry or Kelley O’Hara? Under Armour has created an immersive space where everyday athletes can emulate the pros.

The Baltimore-based sporting goods brand on Thursday night previewed a UA Rush Performance Lab in New York’s SoHo where customers can experience some of the training exercises its elite athletes undergo in hopes of improving their performance.

The lab, which is open today and Saturday only, is also intended to create buzz around its Rush apparel, which launched in April.

“Rush is one of our biggest apparel innovations for the past 10 years,” said Attica Jacques, senior vice president of global brand management for Under Armour. Over the past several years, the company has been focused on its footwear, but the creation of Rush is intended to put apparel back in the spotlight.

Rush took the company two years to develop and uses a mineral-infused fabric created by Celliant that is intended to enhance the ability to train and compete by recycling the body’s energy during performance.

The way it works is that minerals found naturally in the earth are extracted and broken down into active particles, which are then melded together to form a proprietary blend. That blend is then infused into the fibers that are used to create the Rush collection of T-shirts, long-sleeve shirts, leggings, tights and a sports bra.

Jacques said since the introduction last month in Los Angeles, Rush is doing well. She said it’s often hard with apparel to get the message out to consumers about the innovations infused into the product, but Under Armour has been successful using just words to describe the benefits “even on our e-commerce site with a black T-shirt.“ In fact, that T-shirt has risen to become the company’s second best-selling item, Jacques revealed. 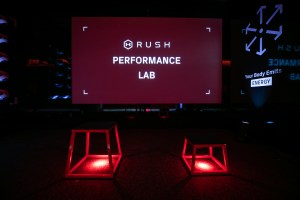 The pop-up will be open through Saturday.

To further drive the message home, Under Armour created a 12-minute documentary that it premiered at the Performance Lab Thursday night and posted on its web site. Titled “Margin of Victory,” the film was directed by Gotham Chopra and highlights Curry, three-time NBA champion as he prepared for NBA Finals, that kicked off Thursday night; O’Hara, a champion soccer player who will compete for the U.S. in the Women’s World Cup starting next week, and boxer Anthony Joshua, the heavyweight champion of the world, who will vie for his first U.S. title on Saturday night at Madison Square Garden.

The film follows the athletes as they train and seek marginal gains that can help them reach their athletic goals.

Paul Winsper, vice president of athlete performance at Under Armour, said the company met with Joshua a year ago and worked closely with him to help him prepare and train for his sport. That involved an intense 10-day stint at the Portland lab where they started on “a total recalibration and reset.” Everything from his vision to his movements to his joints and even his brain were analyzed to calibrate his speed, strength and power and how it could be improved.

“We found out he didn’t really like the cold, so we took him up to Mount Hood and he snowshoed at 8,500 feet with a group of Navy Seals,” Winsper said.

The learnings that were uncovered at the performance lab were then replicated at Joshua’s home in the U.K. as well as a training camp in Florida.

“He said he feels like he’s in the best shape he’s ever been in,” Winsper said, adding that this was achieved not only through his association with Under Armour but also by working with his personal team.

At the pop-up Innovation Lab, regular people can try to train like Joshua by hitting a heavy bag and having their speed and energy return analyzed. They can also try box jumps like O’Hara or some coordination exercises like Curry. At the end of the space, there is a retail component where consumers can buy the Rush product.

Jacques said there are no plans to replicate this pop-up in other cities — at least not at this scale. “But we are looking at doing more experiential events,” she said, adding that smaller-scale ones will be created later this year for footwear, centered around marathon running.