The new training product is said to promote improved performance and energy return and provide the same benefits to the body as an infrared sauna.

UA Rush by Under Armour.

Under Armour’s latest product introduction is called Rush, which is in some ways ironic since it took two years to develop and perfect.

The apparel collection for men and women uses a mineral-infused fabric created by Celliant that is intended to enhance the ability to train and compete by recycling the body’s energy during performance. Rush also created the fabric for Under Armour’s recovery and sleepwear products that were introduced over the last two years. In 2017, Under Armour, in partnership with Super Bowl champion quarterback Tom Brady, one of the brand’s sponsored athletes, introduced Athlete Recovery Sleepwear. The next year, it released the Athlete Recover collection designed in collaboration with Celliant.

While those collections are intended for athletes to wear immediately after an intense workout and while sleeping, Rush is designed to be worn while working out.

The way it works is that minerals found naturally in the earth are extracted and broken down into active particles, which are then melded together to form a proprietary blend. That blend is then infused into the fibers that are used to create the Rush collection of T-shirts, long-sleeved shirts, leggings, tights and a sports bra.

This scientifically engineered fabric is said to promote improved performance and energy return, and provide the same benefits to the body as an infrared sauna, according to Under Armour.

“We’ve been working on this for two years,” said Dan Leraris, general manager of men’s training at Under Armour. “Our founding principal is to take product and make it better, and we’re at our best when we’re solving problems for athletes.”

Leraris said that unlike other textiles used in performance apparel that provide moisture wicking, stretch or cooling properties, the UA Rush fabric actually absorbs heat, converts it into infrared energy and emits it back to the body, increasing circulation and promoting improved performance. 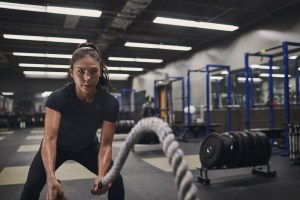 UA Rush is said to use the body’s energy to improve performance.  JOHNHUET

Leraris said Under Armour has obtained the exclusive rights for the product from Celliant in the activewear space through a “multiyear agreement.”

He said that athletes shouldn’t expect to notice an immediate benefit from the Rush gear, however. “This is about incremental gains,” he said. “Over time, it allows you to be better.”

While the initial launch is for training apparel, Leraris said Under Armour may eventually use the technology in base layers for other sports including golf, football and basketball.

He declined to provide details on how the Recover and Sleepwear products have performed since their launch, saying only, “It’s going to take some time. We’re tremendously happy to tell the story, get feedback from our athletes and communicate that to consumers. We think it’s a game changer.”

To promote the launch of Rush, Under Armour has turned to its roster of high-profile athletes — NBA star Stephen Curry, world champion soccer player Kelley O’Hara and heavyweight champion boxer Anthony Joshua to document their training experiences through a documentary that will be launched this summer.

In the company’s year-end earnings call, Patrik Frisk, president, talked up the launch of Rush, and said the company will offer cold-weather gear in the Rush and Recover category later this year.