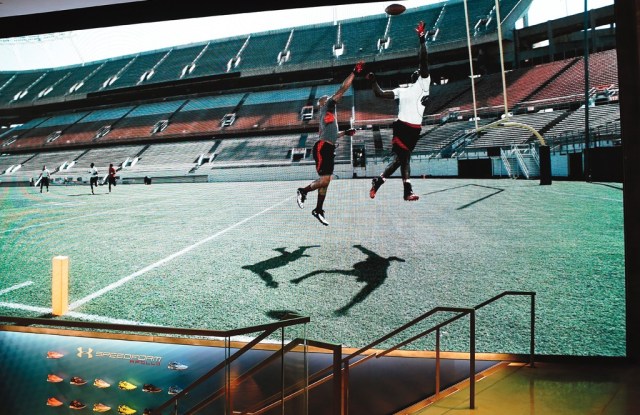 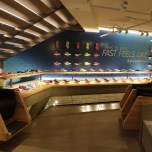 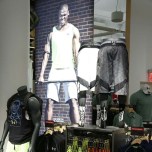 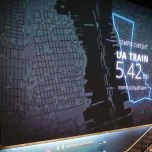 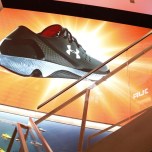 NEW YORK — Under Armour has thrown down an impressive welcome mat — and a gauntlet — in SoHo.

“Welcome to our house,” said Susie McCabe, Under Armour Inc.’s senior vice president of global retail, who joined the company last fall after 16 years with Ralph Lauren Corp., quoting one of the brand’s well-known tag lines.

The store is more than twice the size of the company’s Brand House at Harbor East in Baltimore, where Under Armour is headquartered, and offers the most comprehensive selection of men’s, women’s and children’s apparel, accessories and footwear in the country. Under Armour also operates stores in Annapolis and Bethesda, Md., and at Tysons Corner in McLean, Va.

“This is the start of a strategy,” McCabe said. “We’re incredibly pleased with the performance at Harbor East and Tysons Corner, and this gives us the opportunity to tell our story ourselves. The assortment is a little broader and we anticipate that it will be accretive and incremental to us as well as our wholesale accounts.”

Under Armour is also sold at Modell’s, Foot Locker, Sports Authority and Macy’s Herald Square in New York City. Even so, McCabe believes the brand is significantly underpenetrated here.

“For how sizable the New York market is, we know we have opportunity to generate very good volume,” she said, declining to provide a sales projection for the store.

She stressed, however, that Under Armour is “committed to this being a [real] business, not just marketing.”

Opening a store of this size and scope in New York will undoubtedly lead to increased awareness among consumers. “New York and this store will help with our strategic initiatives, which are to continue to grow men’s and go after the women’s and footwear categories in a bigger way,” McCabe said.

Under Armour is also beefing up its international presence, and the store is expected to help with that as well. In the fourth quarter, the company reported that while revenues outside of North America accounted for just 5.5 percent of sales, the plan is to eventually have overseas sales generate half the company’s volume.

“This is such a hotbed of international and we think we can grow our international brand awareness by being here,” McCabe said. “Some of the best retail on earth is in SoHo and there’s a great balance of local, domestic and international tourists that come here.”

Upon entering the New York flagship, customers are greeted by a 30-by-16-foot video screen lit by 2.6 million LED lights. The video is on a 22-minute continuous loop that includes the company’s brand ambassadors performing various athletic feats and also showcases product. The screen is opposite a “living wall” that replicates one at the company’s headquarters and features 2,000 plants. “It’s reminiscent of our brand: a living, breathing, growing thing,” McCabe said. The company’s mission statement — “To Make All Athletes Better Through Passion, Design and the Relentless Pursuit of Innovation” — is also displayed at the entrance.

The main floor is home to men’s and women’s non-running apparel, with men’s wear on the left and women’s on the right. “Everything in the store has performance attributes,” she said, pointing to men’s wear featuring the Armour Vent heat-dumping technology to help keep athletes cool. Colorful T-shirts, shorts and capris are front and center. “We’re known for our capris in women’s, but now men are wearing them too,” McCabe said, “layering them under shorts.”

The store offers some “elevated training product,” higher-priced merchandise that is designed to be worn to and from the gym. Compression shirts, colorful socks, backpacks and an array of other products are available.

There’s a sizable golf area for men that includes traditional polos and long pants as well as a display of performance chinos. That’s followed by an outdoor action section with boardshorts, tank tops, fleece hoodies, hats and accessories.

At the rear of the store is the Under Armour underwear presentation for both men and women. And above the cash wrap is a 1,000-pound Under Armour wood logo.

The women’s selection includes a T-shirt bar, harem pants and Modal shirts that can be worn to the gym or on the street, and there’s a large “capri zone” offering the popular pants in bright colors and patterns. This includes the number-one selling Armour Vent capri, a black pant with pops of neon colors, that is merchandised with matching Ts. Sprinkled in is the Pretty Gritty collection of more fashionable apparel such as mesh overshirts and slouchy sweats. There’s a separate yoga section as well as another designated for spin.

“This is how women are living today,” McCabe said. “They’re much more active.”

Each of the fitting rooms has a name that corresponds to a location where the company has a presence or a collaboration. Lights brighten automatically upon entering and there are large murals of cities such as London, Baltimore and New York covering the walls.

Downstairs is where the running merchandise is housed. There’s a large assortment of shoes for men and women, focused on the newly launched Speedform, the only running shoe to be created in a bra factory. Customers can try on the shoes by sitting in one of the “thrones,” large leather chairs with wood frames. T-shirts, shorts, jackets, vests — many with reflectivity — are found here as are women’s skorts and apparel.

The rear of the lower level is where the kids area — Next — is located. “This is our largest youth presence in the company,” McCabe said.

Tucked in the corner on the lower level is the Rowhouse Basement, a VIP area that is a nod to the company’s beginnings in founder Kevin Plank’s grandmother’s basement in Georgetown. Here, the small men’s lifestyle collection, 35th and O, is sold, and there’s a television, bar and refrigerator where athletes and other celebrities can shop in private.

The store features New York-specific merchandise including Mets and Yankees Ts as well as innovative graphics such as a running Statue of Liberty for men, women and kids.

To introduce the store to customers, Under Armour will unleash a number of marketing initiatives over the next few weeks featuring sponsored athlete appearances, billboards, trucks driving through the city, radio spots, newspaper advertising and workouts.

Looking beyond SoHo, McCabe said that Under Armour continues to look for retail locations around the country. “We’re not going to be in 300 malls,” she said. “We’re looking for quality over quantity. But we are looking for the best locations in appropriate markets.”