Under Armour Prepping to Go Where Few Have Gone Before

The activewear brand has partnered with Virgin Galactic to dress the people who will one day take commercial space flights.

YONKERS, N.Y. — The space race is heating up again.

One day after NASA unveiled its prototype spacesuits for new moon missions, Virgin Galactic and Under Armour took the wraps off theirs.

Earlier this year, Under Armour revealed that it had become the exclusive technical spacewear partner for Virgin Galactic’s commercial space flights. The first flights are expected to be launched sometime next year.

At an event at iFly in Yonkers, N.Y., Under Armour chief Kevin Plank and Virgin Galactic founder Richard Branson were giddy with excitement as the base layers and outer uniforms were shown for the first time. Dancers gyrated in the leggings and long-sleeve tops on solid ground, before the pièce de résistance: a duo in a zero gravity tube — hence the road trip to Yonkers — did weightless flips and walked on the walls dressed in the full spacesuits. The exhibition ended with Branson appearing in a cloud of fog. “Coordination is not one of my strong suits,” he said later when asked why he didn’t do a somersault or two while in the tube.

WATCH: See a Virgin Galactic and Under Armour Space Suit Put to the Test

During a press conference that was live-streamed to the space community, the British entrepreneur didn’t change out of his suit that was complete with his name emblazoned on the right thigh and a British flag on the left sleeve. Plank, who opted for jeans and a cobranded black jacket, said that he’d struck up a friendship with Branson more than a decade ago and that eventually led to a conversation about what people would wear to space when they eventually had the opportunity to leave Earth’s atmosphere.

Although the civilians who will have the opportunity to fly into space on Virgin Galactic won’t actually leave the ship, they nevertheless need to be comfortable and be able to move and not be distracted by what they’re wearing, the companies said.

That’s where Under Armour came in.

The team used some of its proprietary materials — including HeatGear, ColdGear, Recovery Sleepwear and HOVR — to create leggings and shirts with temperature control and moisture-wicking properties. The bottoms have light compression to make the wearer more comfortable at G-force pressure and the insides are lined with a fabric made from sustainable wood pulp yarn that helps dispel heat. 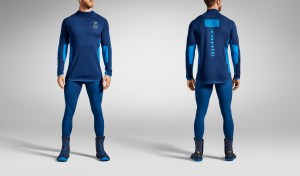 The base layer product made by Under Armour for Virgin Galactic.

The space suit, in a “deep space blue” color with pops of gold “inspired by the sun,” uses a special material for the elbows and knees that conforms to each person’s body shape, and HOVR cushioning for the shoulder bags and neck. 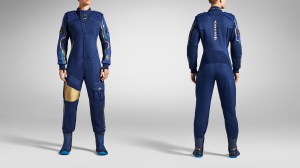 The Under Armour Virgin Galactic spacesuit will be customized to each wearer. 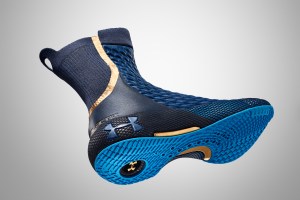 Each uniform will be individualized with the person’s name, country and a mission patch. There is also an interior pocket so mementos from home can be carried on the flight.

“We were able to incorporate the nostalgic elements of the classic spacesuit — not only from past space missions, but also iconic space movies — to redefine the way we think of space apparel moving forward and create something memorable and unlike anything future astronauts have ever seen,” said Nick Cienski, principal innovation apparel designer for Under Armour.

With around 600 people on the Virgin Galactic waiting list for commercial space flights, Under Armour knows it isn’t going to sell many of the space suits. But the company is also producing a limited-edition T-shirt with the UA-Virgin Galactic names and the collection’s logo which shows an airplane morphing into a rocket ship. It went on sale on the Under Armour web site Wednesday for $35, a drop in the bucket for the people who have ponied up some $250,000 for about 10 minutes of weightlessness above the Earth’s atmosphere.

Virgin Galactic is expecting to start blasting off sometime next year and Branson has already said he and his family will get the first ride. But is Plank on the short list to fly in space? “I have a day job,” he said with a laugh.