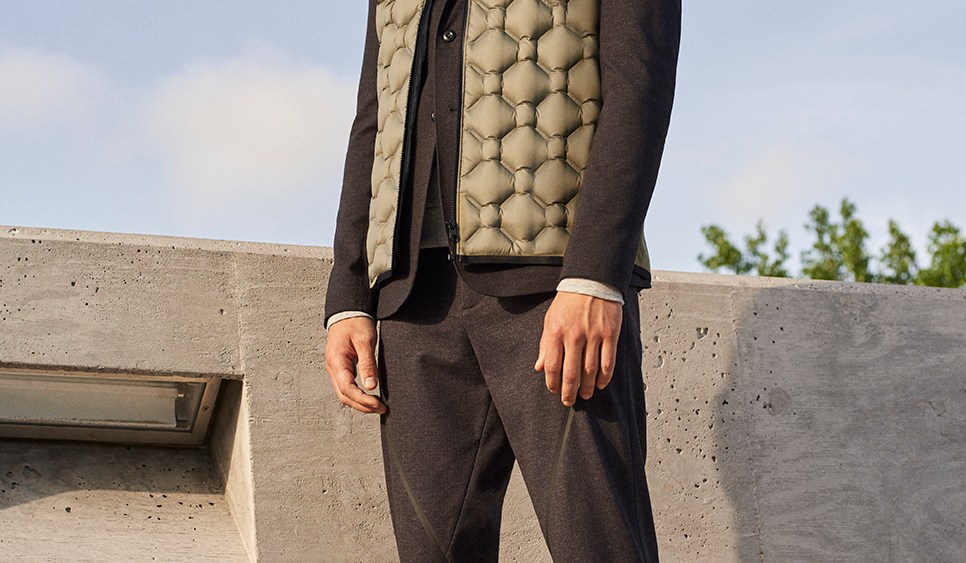 Under Armour is ready to take the plunge into the premium sportswear business.

The Baltimore-based activewear brand is preparing to unveil UAS, a new technically infused collection of apparel, footwear and accessories that marries the brand’s expertise in performance with fashion-forward silhouettes and designs.

UAS will be presented during New York Fashion Week on Sept. 15 and go live at Barneys New York, Mr Porter and a handful of other domestic retailers at the same time.

The launch of the 110-piece collection is being spearheaded by Ben Pruess, senior vice president of sportswear at Under Armour, who was coaxed out of retirement in Venice Beach, Calif., by Under Armour founder and chief executive officer Kevin Plank. Pruess, a one-time professional snowboarder, previously spent seven years as global vice president at Adidas Originals and also worked for Salomon and Bonfire Snowboard.

In an exclusive preview Wednesday, Pruess said he thought he was “out of this game,” but when Plank came calling, he reconsidered. “It’s so eye-opening sitting with Kevin and Kip [Fulks, Under Armour’s chief merchandising officer],” he said. “They knew there was a part of the consumer journey they were not engaged with.”

Calling Plank “lightning in a bottle,” Pruess said Under Armour has proven over its 20 years in business that it is willing to listen and learn about areas in which it doesn’t have expertise. And in this case, it’s contemporary sportswear.

“They knew they needed someone to come in and figure it out,” he said.

Pruess believes the collection, which was designed by Tim Coppens, fills a “new and unique white space” in the market with its blend of performance features and fashion. “This is not your father’s sportswear brand,” Pruess said.

Instead, UAS is “modern, American sportswear in the truest sense” with an East Coast mentality. The brand targets the professional Millennial customer who has an “active approach to life. If your passion is to be an athlete, what do you wear in your professional life?”

What it is not is ath-leisure, he stressed, a category he said is “not purposeful” and is “all about comfort. This is what happens next after the commoditization of ath-leisure.”

UAS has “the traditional Under Armour heartbeat,” but with modern styling. For example, a men’s suit is fully knit from a four-way stretch wool and viscose blend offered with rugby pants with articulated seams and an athletic fit. A down vest is bonded so stitches are not used and there is a heightened ability to create shapes.

There’s a transparent parka with taped seams, a subtle camo printed bomber jacket in stretch polyester with a detachable hood, and heavy merino wool French terry fabric sweatpants with water-repellent zippers. And there are a lot of layering pieces.

The women’s collection offers BMX-inspired rugby pants, leggings in a cotton twill compression fabric, a crewneck sweater in a cotton knit and a quarter-zip knit mock racer top in a compression fabric. Other looks include a women’s rugby trenchcoat in tricot wool with a water-resistant finish.

“We’re a sports brand so it’s OK for us to reference rugby,” Pruess said with a chuckle.

The logo for the UAS line is a delta that was derived from the folding of an American flag, another nod to Under Armour’s distinctly American roots.

The collection consists of 60 percent men’s wear and 40 percent women’s wear. The footwear offering is 50-50.

When the collection is shown on Sept. 15, it will immediately be available for sale.

“This is the first time Under Armour will be in tier-one retailers,” he said. The stores three will introduce the collection have committed to show complete looks from the line. Three of Under Armour’s own brand houses — its name for its large, freestanding retail stores — will install shops for the collection. Those locations are New York, Boston and Chicago. Barneys will also be doing an “activation” for the launch, he said.

Pruess said that there are a few pieces that will be offered only to the wholesale partners, particularly the highest priced product, which will allow them some exclusive pieces.

Because it’s an entry into an entirely new market for Under Armour, the company was careful about picking whom to partner with. “If someone wanted to cherry-pick the line, we don’t need it,” he said. “It’s important to see the full context of the collection and offering a single item wouldn’t work.”

Season two, retailers in Asia and Northern Europe will be added, Pruess said, and then the line will grow from there.

Pruess said UAS is “the antithesis” of the mass-market line that will be offered at Kohl’s for spring, which will be called simply Under Armour. That collection of men’s, women’s and children’s wear will have a particular focus on women’s and opens up another avenue of distribution for the brand.

Asked for a volume projection for UAS, Pruess said: “Our brand is doing so much and UAS is a channel we’ve never been in before. This is not about how big UAS can be, but it’s a big, important step and creates a runway for the other parts of the brand.”