Without Walls, the apparel and accessories brand, has taken over roughly 1,500 square feet inside the retailer’s high-profile stores. 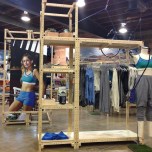 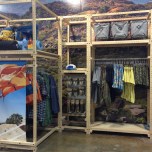 Urban Outfitters Inc. is getting active with Without Walls.

Since March, the apparel and accessories brand developed by Urban Outfitters to cross the fitness, cycle, trail and surf categories has taken over roughly 1,500 square feet inside the retailer’s high-profile stores in New York, Costa Mesa, Calif., Santa Monica, Calif., King of Prussia, Pa., Portland, Ore., San Francisco, Seattle and Hollywood, where Without Walls officially launched with a party in April. In June, a Without Walls in-store shop will be added at the Urban Outfitters location in New York’s Herald Square before the concept will expand to another four to six doors in the fall and possibly three to six doors in 2015.

Colby Black, merchandise manager for Without Walls, traced the origins of the brand back nearly two years ago to discussions among a few Urban Outfitters employees — including Black, Urban men’s apparel and Without Walls creative director Matt Rose and Without Walls and Urban’s men’s apparel executive director Mary Coffey — about the emphasis on function over fashion in the athleticwear market, and the potential for a brand that put fashion first. With its emphasis on fashion, Black, Rose and Coffey felt Without Walls could be a tad less serious than most of the existing activewear brands and attract customers who don’t necessarily aspire to be Kobe Bryant or Serena Williams with a message of inclusiveness rather than exclusiveness.

“We are seeing more and more people that are young care about their health and their communities, but the things they are involved in are getting less hard-core. It used to be that if you wanted to run, your options were either to run a 10k or to go run a marathon. Now, people have tried to interject fun into races through things like Color Runs and Tough Mudders. That is where we see our customer falling,” said Black, continuing, “When you look at the landscape, you’ve got the major players — the Nike, Adidas and Lululemon brands — that are out there. From a performance standpoint, they are great. They have great fit. What we didn’t necessarily like was the brand messaging and the aesthetic of it all.”

Aimed at customers 18 to 28 years old, versus the 30- to 35-year-old age span that Black posited other activewear brands largely target, Without Walls has the freedom to be edgier in its designs. At the Without Walls space in Hollywood, that approach is made obvious with an array of color. It’s a brand for women not afraid to show off a neon sports bra when they run. Taking stock of Without Walls merchandise sales so far, Black said, “It is our direction in fashion that is driving it. It is not basics.”

Black explained the idea for the design was to introduce vibrant colors and patterns across the apparel and accessory repertoire. “We felt that was a void in the marketplace,” he said, pointing to Without Walls’ printed running shorts and printed tights as some of the apparel highlights for the brand. Tops, however, are where Without Walls hopes to shine. “We also think there is a void in performance knit tops,” said Black. “A lot of brands focus on the bottoms.”

Black mentioned that the current Without Walls merchandise doesn’t reflect the creative leadership of Joelle Michaelhoff, the former lead designer of Lululemon who joined the company as design director last year, but he said her influence will start being felt in the in-store shops in July.

At the location in Hollywood, apparel and accessories in Without Walls’ fitness category — its largest — greet customers as they enter. In general, merchandise is grouped according to activity, and men’s and women’s goods are mixed together. “It is not women’s on the left, men’s on the right. It is not women’s downstairs and men’s upstairs. We thought it was most important to tell a true active story, and splitting it would dilute the impact of showing trail, surf, cycle and fitness,” said Black. Across the assortment in Without Walls’ retail space, about 60 percent of the merchandise is women’s and the remainder is men’s.

Black likened prices of Without Walls’ merchandise to those at Nike, adding Without Walls’ prices are typically 40 percent higher than Urban Outfitters’. “You can buy an accessory for as little as $5, and there are jackets that are $298. There is a pretty wide spread. We are targeting good, better, best. There are different customers. There are some just looking for basics, and there are some looking for Gore-Tex jackets from a name brand that is more expensive,” he said, noting, “All price levels are working.”

Without Walls’ merchandise constitutes about half of the selection in the in-store shops, and the remainder comes from third-party brands — more than 100 of them — big and small. Eventually, Black forecast that Without Walls’ merchandise would probably account for 65 percent of the selection. A few of the widely recognizable third-party brands are Asics, Vans, Patagonia, The North Face, Saucony and Columbia, and a few of the lesser-known ones are Yokishop, Mowgli, Seea, Onzie and Newline, a brand from Denmark Black discovered traveling there that is available in North America only at Without Walls.

Select smaller brands in the retail space are spotlighted using clear placards that have descriptions of their heritage. “We have felt that it is very important to help those brands tell their story and allow them to be who they are inside of our space. We do adopt signage for the Without Walls brand, but we allow brands to have their biographies in the store. We are proud of the brands that we carry,” said Black. “Rather than just going after these big name brands that everyone knows and sees all the time, we are targeting brands that are exclusive to us and making it an exciting shopping experience.”

Yellow pine fixtures hold the brands’ merchandise in the Without Walls retail space, which has a dedicated brand leader on staff at each Urban Outfitters location where it is offered. Black detailed that the inspiration for the fixtures came from a Seventies book on modular furniture. “It is very mobile. You can see there are multiple holes drilled into the fixtures, so, at any given time, we can adapt any of these fixtures to hold a longer bar or a shelf. It is almost like a child’s Lego display that we can change and adapt every season,” said Black.

Urban Outfitters could use a boost from Without Walls. Its comparable net sales decreased 9 percent in the three months ended Jan. 31, compared with a 20 percent increase at Free People and a 10 percent lift at Anthropologie. Black called the early read on Without Walls “good,” although he wouldn’t discuss financial results. “Customers are highly engaged, and they are spending a lot of time in the space. We are getting good feedback,” said Black. He figured that 50 percent of Without Walls’ customers are completely new to Urban Outfitters, and the rest are Urban Outfitters’ customers purchasing more from the retailer.

“There is a customer that already comes into Urban and says we shop at Urban for our casual clothing and, ‘I go running or do yoga, but I have never been able to buy running or yoga gear at Urban,’” said Black. “The other customers are customers that are more in tuned to athletics, but they might be bored of wearing their black tights all the time and want a little more fashion.”