Proceeds from a limited edition anniversary bathing suit will go towards helping protect the sea turtle, which is the brand’s emblem. 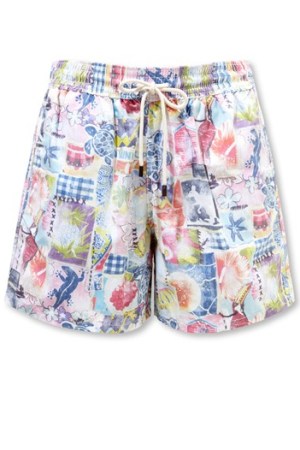 The brand’s founder, Fred Pryskel, was known for his quirky creative streak. As the story goes, in the Seventies in Saint-Tropez, while sitting in the town’s mythic Café Sénéquier, Pryskel yanked off his table’s checkered tablecloth and fashioned a midthigh boxer short-style swimsuit out of the fabric. He went on to make a line of shorts in quirky fabrics, using the likes of tea towels,  that became sought after by the Saint-Tropez in-crowd. A car enthusiast, Pryskel baptized the line Vilebrequin, which translates into crankshaft in English. His iconic boxer short, baptized the Moorea, continues to be the brand’s best-selling style today.

Vilebrequin is now owned by Dutch private equity fund Fashion Fund One, which acquired the brand in 2007.

The label rapidly moved from its artisanal beginnings, however, setting out to perfect the bathing short’s comfort factor and develop innovative fabrics built to resist the elements. Vilebrequin uses a specially developed 100 percent polyamide emerized fabric. Prints are produced in Italy, with a roller passed 12 times over fabrics to achieve the right color density.

Citing the international traveler as the brand’s core client, Brian Lange, managing director for Vilebrequin the Americas, said the brand’s provenance plays a big factor in its appeal. “There’s nothing like having a piece of the South of France,” he said.

Defining features of a Vilebrequin bathing short today include a four-ply twisted yarn capable of withstanding four metric tons; double stitching; polyester cord designed to retain its form thanks to a hidden second interior cord; a 5-centimeter-high waistband made using waterproof filaments, and special eyelets placed at the back to reduce a ballooning effect in water. Styles carry a discreet blue label on the waistband at the back with the Vilebrequin name stitched in white.

The collection encompasses around 150 to 200 bathing suit styles in varying lengths. Casual resortwear elements, such as cotton polos and linen shirts, and accessories have also been folded in over the years, with plans this fall to add on elements geared to the winter season. “It’s something that will take the client from the beach to colder climes,” said Lange, adding that the concept centers on classics that each season are revisited with new colorways.

The brand this spring named Fabien Cousteau as its ambassador, forming a partnership with Cousteau’s Plant-a-Fish organization to coincide with the company’s anniversary. Proceeds on a collection for men and boys, comprising swimsuits and a t-shirt carrying a sea turtle motif, will go to Plant-a-Fish.

Prices for the bathing shorts range from $150 to $550. Lange said the brand aims to target a broader demographic in terms of age group and increase the recognition of the collection, which counts around 70 stores in 51 countries. Well-established in New York and Florida, Vilebrequin, which operates 14 stores in the U.S., is looking to ramp up its presence on the West Coast and Central America. A new 665-square-foot store location is set to open this summer on New York’s Madison Avenue, likely in July, while the brand’s first Canada-based store will open in June.

Further expansion is also planned for South America and Asia.

Citing strong recovery from the recession, Lange said sales this year have increased in the double digits.

Lange said he expects business on the brand’s e-commerce site, which launched in the U.S. 18 months ago, to accelerate dramatically over the next 12 to 18 months, with plans to increasingly direct traffic to the site via promotion on social media platforms. Today the site generates around 5 to 10 percent of its sales in the U.S.