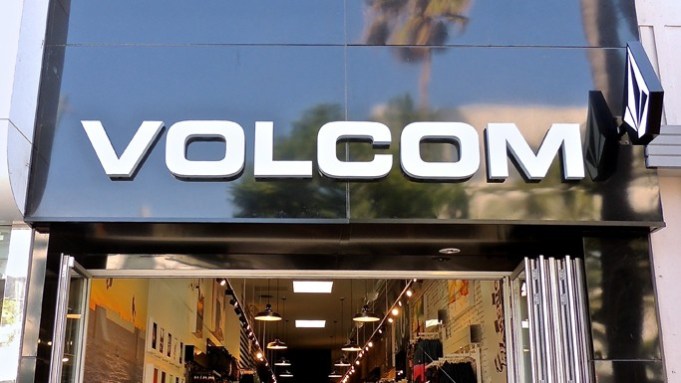 Volcom is not only about surfing, and its new stores aim to show that.

The Kering-owned surf, skate and snowboard apparel brand returned to the Los Angeles area after a two-year retail absence with a 2,200-square-foot store on the Third Street Promenade in Santa Monica, Calif. The store introduces Volcom’s updated retail concept developed with consultancy Interbrand to the West Coast after it was unveiled in March when the brand finished remodeling its New York flagship.

“I just think the store better reflects the brand than our old concept,” said Rocky Taylor, Volcom’s retail director for North America. Eric John, vice president of global retail at Volcom, elaborated, “At the end of the day, we want to be inclusive rather than exclusive. We want to serve all the Volcom enthusiasts across the three sports, and we feel this new concept does that really well.”

Underscoring its presence in the various action sports, which John estimated Volcom’s business is evenly spread between, the Santa Monica store incorporates a heritage wall with images of each of them from throughout the brand’s 22-year history and its “True to This” logo, a recent addition that communicates Volcom’s authentic ties to the action sports world. With its materials such as brick and stone, the store also emphasizes that Volcom doesn’t stick to surf alone.

“A lot of the players in our space have really similar looking build-outs. They are mostly wood, and they have a really strong beach feel. It feels kind of like a surf shop.” said John. “Ours is more well-rounded, just like our brand is. It not only speaks to the kid at the beach, but the kid in the city and the kid in the mountains. There is very little wood in the store. You will be hard-pressed to find anyone in action sports that has the urban feel that we have.”

In New York, John and Taylor said customers have been responding enthusiastically to the refreshed store concept, in particular to denim, which is merchandised in its own section both folded on shelves and hanging. “We are happy with the results of the store,” said Taylor. Added John: “It really suits the denim that we make, and denim has been dominating the performance.”

Like many brands in the action sports sector, growth has been hard to come by at Volcom. In the third quarter, the company’s sales advanced 2 percent, an increase that Kering partly attributed to solid revenue from the brand’s footwear line that launched earlier this year. In the first half of 2013, Kering disclosed that non-Puma sales from brands in its sport and lifestyle division, including Volcom and Electric, were 113 million euros, or about $155.5 million at current exchange, down from 120.2 million euros, or $165 million, from the prior year.

Wholesale sales are the primary driver of Volcom’s business, but retail is gaining a larger share as the brand pushes into emerging nations with stores. Volcom has 14 stores in the U.S. and about 70 stores globally, 25 of which are licensed. All the store openings set for the remainder of the year will be outside of the U.S. Among the places that will get Volcom stores before 2013 is out are Costa Rica, Chile, Peru, Hong Kong, the Philippines and France, where a store will bow in Lyon.

In the years ahead, John predicted there would be no more than one or two store openings in the U.S. a year. Instead, he forecast that Asia, Latin America, Europe and Australia would be the focuses for Volcom’s retail expansion. Asked about the goal for the number of stores that would be opened abroad, John said, “We are not really throwing a number on it. We are taking the opportunities as they come.”