The men's wear brand was launched in 2015 with a technical compression short.

A look from Wolaco's women's collection.

Ath-leisure be damned. Wolaco has its sights set on the true performance activewear market with the introduction of its first apparel collection for women.

Wolaco, which stands for Way of Life Athletic Company, was founded as a men’s active brand in 2015 by Terry White, who was frustrated by having to run with his phone in his hand and his keys in his sock because the major brands didn’t offer shorts with pockets to stash and protect his things.

So in the spare time from his corporate job, the former collegiate lacrosse player set out to design his own. It took him 1.5 years, but he finally perfected the North Moore short that features sweat-proof pockets and patented compression fabric. He launched on Kickstarter, and raised $122,000 within 48 hours.

Since that time, Wolaco has expanded its men’s offering to include a more-traditional running short, tights, tanks, T-shirts and long-sleeve technical tops as well as caps.

“I’d been an athlete my entire life,” he said. “I’m from New Jersey but played lacrosse for Harvard.” Once he left college and got a job, he was determined to stay fit and often ran around his home in New York. “But there was nothing in the branded world to support me,” he said. “So I set out to solve a simple problem.”

Now he’s turned his focus to the already crowded women’s wear market and added some key employees to help him grow, including creative director Nick Diodato and marketing director Erin Falter, who also serves as the head of the women’s division. “I needed a counterpart who I trusted and who had the same vision,” he said of Falter.

Together, they created a small women’s offering with a similar aesthetic and three core pieces: the Pier 25 legging, which includes a sweat-proof phone pocket in a compressive knit in a high-gauge fabric so there’s “zero chance of sheerness.” That retails for $104 and is being marketed as “the anti-ath-leisure” piece. 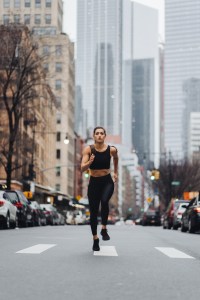 There’s also the Walker crop top, which can also double as a sports bra with a high neckline in the same compressive fabric for $74, and the Murray Cropped Sweat with a rounded bottom, thumbholes and a cropped length for $98.

Wolaco is still focused on selling direct-to-consumer on its e-commerce site and to high-end gyms, including 15 Equinox doors as well as 31 Barry’s Bootcamp units. It is also creating a community of like-minded athletes with its Wolaco Wednesday workouts where men and women in New York are invited to join the company to work out as a group in a different location every week. The group has more than 900 members.

While in entering women’s Wolaco is going about against a slew of much bigger brands, from Lululemon to Athleta, Falter said the go-forward plan calls for expanding the women’s offering to other complementary items later this year. “We see a white space for true performance product,” she said. “But don’t expect lace accents or cut-outs.”