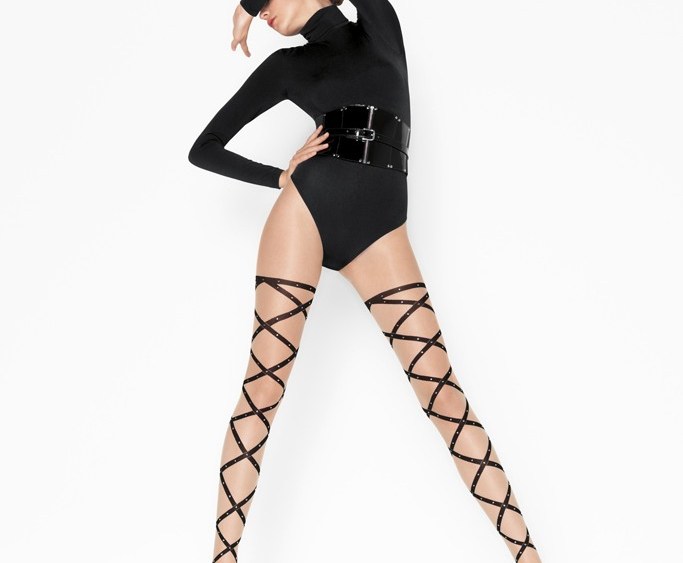 In step with the best-selling racy book “Fifty Shades of Grey,” Wolford’s collection of hosiery, shapewear, lingerie and body-conscious clothing for fall-winter 2012-13 is underscored by an abundance of chains, studs and metal beads.

The collection, which is rendered in sharp, contrasting looks with a touch of surrealism, was unveiled this month at a press launch and fashion show at the Wolford AG headquarters in Bregenz, Austria.

Ronald van de Kemp, who has headed Wolford’s design team since 2007, described the collection as also having strong elements of Elsa Schiaparelli coupled with a Fifties flair and a hint of rock-chick attitude.”

Wolford’s bondage-inspired stockings, silhouettes and corsets that double as figure smoothing shapewear could easily jazz up a music video or a pop star’s concert tour. And, indeed, the likes of Jessie J, Beyoncé and Madonna have been photographed wearing Wolford’s sexy looks.

“We do know that celebrities and pop stars like Wolford a lot — especially the trend hosiery, but to a growing extent also the ready-to-wear,” said Martina Brown, Wolford’s head of marketing.

The star piece of the rtw line is the versatile Fatal Bicolore Dress, a slinky tube of clingy fabric, each side in a different color. The dress can be folded, draped, worn inside out and gathered to create as many looks as the wearer can dream up. The newest style will be available in jewel-tone shades of pink and purple beginning this fall.