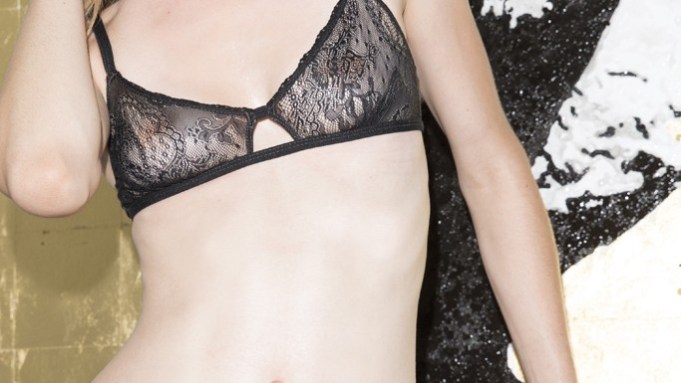 Sometimes, girls just want to have fun — at least with their lingerie.

That’s the approach Dierdre Roffoni is taking with Xirena, a Los Angeles-based and sourced line of bras, panties and loungewear that pop with peppy prints. Collecting as many as 40 designs each season, Roffoni and her codesigner, Stacey Baldi, scatter the batik, lace, snakeskin, polka dot and floral patterns on a table as if they’re assembling a giant puzzle. They often mix four prints and a solid-colored strip for a chaotic but comely combination on a single piece.

“It’s eye candy,” Baldi said of the four basic styles, which include a bra with or without cutouts, a thong, boyshorts and bikini bottoms.

“The crazier, the better,” Roffoni added.

This hodgepodge method of designing is helping Xirena to thrive. Since making its debut for holiday 2011, the label has been picked up by 170 fashion-forward stores worldwide, from Japan and Australia to the U.S. and France, including Ron Herman, Satine, Just One Eye and Neiman Marcus.

Roffoni, who also owns a showroom that represents Kenzo, Isabel Marant and other fashion brands, is eyeing print-loving British customers for the next overseas expansion.

In contrast, the loungewear is a subdued selection of Henley shirts, tunics and tap shorts fashioned from cotton poplin, gauze and Swiss dot in neutral hues. Wholesale prices run from $19 to $33 for the lingerie and $26 to $98 for the loungewear.

Aside from the lacy numbers, the polyester-spandex lingerie is sporty enough to double as swimwear. Still, Roffoni and Baldi introduced a nylon-spandex swim line this spring. Wholesaling for $82 as a set, the water-worthy works include a halter one-piece and string, bandeau and bralette bikinis. The new grouping is fitting for the brand inspired by the Spanish word sirena, which means “mermaid,” even if the wearer prefers to stay on land.

“I always wear a loose button-down shirt with a bikini bottom,” Roffoni said. “A lot of my clients don’t go into the water.”