The new French intimate apparel venture is dedicated to the modestly endowed. 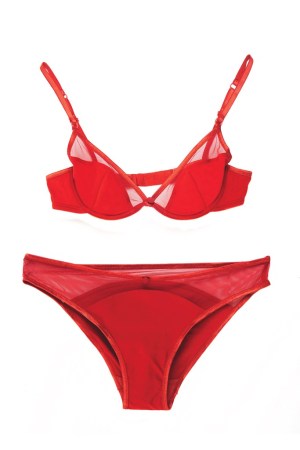 French women are proud of their small breasts, according to the founders of Ysé, a new French intimate apparel venture dedicated to the modestly endowed.

Clara Blocman, 24, and Bérengère Lehembre, 26, two graduates of HEC business school, teamed up to create the new brand that caters to women wearing sizes from AA- to A-cups.

“There is a need for small-breasted women, like ourselves, who don’t want padded bras,” explained Blocman. “Our collection has no pads, silicone or thick foam padding. Instead, we offer sizes and fits that enhance a small-breasted women’s natural silhouette, proving how feminine they can be.”

Blocman asserted that Ysé’s proposition is unique, not only for its marketing but also for a special technique with foam that is cut and seamed.

The result is a chic line of 10 bra and panty sets built with European fabrics such as Calais lace, Austrian tulle and Italian microfibers. Retail prices range from 17 euros for undies to 60 euros for a bra, or $23 and $79, respectively.

The firm is targeting young, urban women who are tuned in to fashion, Blocman said. And with literary inclinations, too. Each style is named after a book, such as “L’Amant” (“The Lover”) and “A l’Ombre des jeunes filles en fleurs” (“Within a Budding Grove”).

Male purchasers are also being targeted. On Ysé’s Web site, there is a nearly foolproof guide for men so they can’t get sizing or style wrong when they buy a lingerie gift.

In lieu of traditional advertising, the company is relying on a viral campaign based on its 600 “ambassadors” promoting the brand on social networks. In return, they receive a flurry of discounts and offers.

For now, the brand is sold exclusively through its e-shop. Since the site went live last October, the company has generated sales around 40,000 euros, or $53,000, Blocman said.

By 2016, the small-breasted specialist plans to expand distribution to department stores and expects to have freestanding Ysé boutiques in France and the international marketplace, beginning with Asia.