Heightened reality. Roman enchantment. Theatrical techno-chic. A major hire. A celebration of the ateliers. And of course, plenty of major dresses. A whirl of activity on the runway and off spoke to haute’s 21st-century vitality. 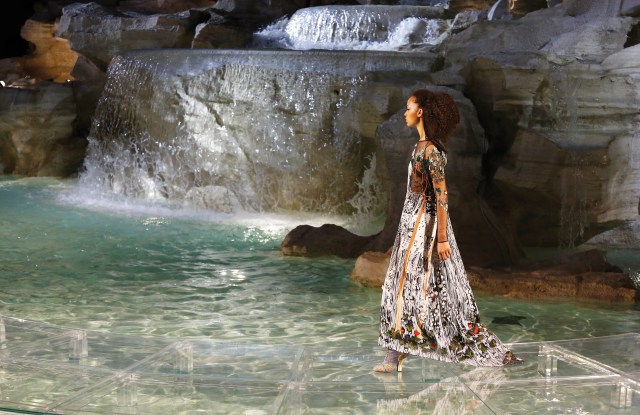 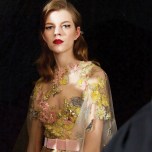 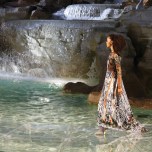 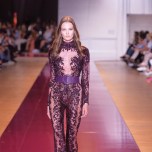 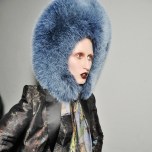 Before his Maison Margiela Artisanal show at the glorious Hotel des Invalides, John Galliano indulged me with an in-depth (as preshow chats go) conversation about the collection he was about to present. Galliano works a particular alchemy of reverence and iconoclasm steeped in knowledge of historical periods, themes and facts he has appropriated and romanced through the years and sartorial knowledge of the clinical, line-for-line, seam-for-seam construction of the related garments.

For fall, he integrated far-flung influences, the most significant of which were the French Revolution and today’s skateboard culture. Photographed in silhouette, one look could have been Napoleon himself; another, a Lord of Dogtown. Turn the lights on, and despite their faithful lines, the clothes morphed into something completely different via color and adornment. Other looks referenced the starting points only vaguely, as Galliano created innovated volumes from existing tropes. “What I have found, seeping through my very soul…what’s developed is a less precious relationship with clothes,” he said of the time-travel cross-pollination. “And that has seeped into our work.”

From Margiela, it was on to a quick stop at the Ritz Paris, where Laure Hériard Dubreuil held a breakfast marking the installation of The Webster pop-up in the hotel’s retail gallery. Her concept would prove delightful, and the stop facilitated perusal of the most anticipated renovation in memory. I’m neither a Ritz connoisseur nor client. Many years ago, in advance of my very first season covering the shows in Paris, our late editorial director (and Ritz denizen), the legendary John B. Fairchild mandated that as a “welcome to Paris,” I would stay at the storied hotel. Turns out, it was a one-season perk. I wowed friends with descriptions of my room and of lobby sightings before moving on to more modest accommodations. Since then, the occasional show at the pool and visits to friends’ rooms aside, my exposure has been primarily of the first-floor variety — lunch or a tea at The Bar, picking up my former editor Etta Froio for the day’s shows, etc., the lobby my primary point of reference. Like everyone else in Paris for couture this season (and surely not limited to that group), I was excited to see the new Ritz. But walking in delivered not the rush of the new, but a deflating déjà vu. The front lobby looked exactly as I remembered it — not only the same exquisite structural grandeur, but the same rugs with the same patterns, the same furniture upholstery with its faux-old pomp. It probably isn’t all exactly the same (toward the back and through the gallery, some of the woodwork seemed different), but the impression upon entrée was sameness. No doubt, in the rooms, the Wi-Fi is now perfect, cleverly positioned portals that allow for convenient charging and the plumbing flushes with state-of-the-art swirl. But visually, the lobby looks like a faithful restoration rather than renovation, nothing heralding “welcome to the 21st century Ritz.” Such is the quandary in tinkering with a hallowed institution, when change can be perceived as tantamount to blasphemy.

Happily, I thought, considering Margiela, the couture has progressed beyond that dilemma without losing its essence and heart of couture.

At its most interesting, the new couture creates currency out of tradition. That doesn’t mean forcing haute principles into inauthentic Space Age or Street, or that it must necessarily embrace tech, though Iris van Herpen is certainly a key player in haute’s evolving world. Her application of tech-derived materials has made her a subject of fascination and thrust her into the awareness of those with a curatorial interest in clothes. In the U.S. alone, her work is featured prominently in Manus x Machina at the Met and Beauty at the Cooper Hewitt, and a solo exhibit of her work, Iris van Herpen: Transforming Fashion, closed in May at the Museum of Art in Atlanta. For fall, she started with sound waves for a collection that included a piece made with thousands of crystals encased in liquid silicone.

But couture isn’t at its heart about the museum piece, whether modern techno marvel or grand ballgown of yore. Nor is the genre’s embrace of technology limited to overt visual expression. It is found as well in the stuff of a fairy tale, as in Karl Lagerfeld and Silvia Venturini Fendi’s haute fourrure Fendi show, for which the professional flock and a host of clients flew to Rome following the close of the shows in Paris. Lagerfeld called the show “Legends and Fairy Tales,” taking direct inspiration from the early-20th-century Danish illustrator Kay Nielsen, specifically his work for the children’s book East of the Sun, West of the Moon. The show, at the newly restored Trevi Fountain produced a moment of fashion magic — otherworldly clothes on models who looked like the princesses whose likenesses were intarsia-ed into some of the dresses. But magic takes many forms. Fendi’s brilliant research and development allows the house to realize Lagerfeld’s most ardent creative demands, the pictorial embroideries, shirred fur intarsias, the cascades of mink blossoms, the Persian lamb lace, the combined result of skilled craftspeople and cutting-edge lasers and other technology. At a distance, the clothes mesmerized. Up close, their intricacy awed.

The Fendi clothes were storybook dreams, dreams that will be ordered and worn to events. The event dress remains core to couture; certainly a number of couturiers — Giambattista Valli, Elie Saab, Zuhair Murad — focus on it exclusively or almost so. But couture has never been just about zhushed-up gowns. Since forever, the house ateliers have been divided between flou and tailleur, the latter focusing on clothes for every day (of a sort). Donatella Versace played beautifully to that at Atelier Versace. For all her renowned love of sexed-up nighttime diva dressing, she made great coats, smart and dripping with functional chic, the stars of her show. At Armani Privé, Giorgio Armani brought sleek dash to daytime with reed-thin tailoring in stylized houndstooth prints. And Dior’s outgoing interim team of Serge Ruffieux and Lucie Meier delivered lovely daywear derived from the New Look with a soupçon of Yohji.

A spirit of inclusion has infiltrated couture week, some of it official, sanctioned by the Chambre Syndicale — the arrival of newcomer Francesco Scognamiglio to the schedule from Italy — and some not. While Alberta Ferretti chose to show her Limited Edition evening collection in Paris, out of respect for the specific craft of couture, she made no bones that Limited Edition means just that. “Even if [it] is not exactly couture, I find it the ideal moment to present it,” she told WWD.

Off the runways, the biggest news of couture that’s new, or will be next season, came via confirmation of the much-anticipated migration of Valentino’s Maria Grazia Chiuri to Dior, marking the end of her long-running partnership with Pierpaolo Piccioli. Together they transported the Valentino aesthetic from the snazzy, high-gloss glam of the house founder to one of poetic refinement, making visual romance cool without a shred of traditional markers of cool. Where each will go on her and his own remains to be seen. One (unconfirmed) school of thought identifies Chiuri as the pragmatist of the partnership and Piccioli, the dreamer. We’ll see. It’s interesting, too, to note that Chiuri becomes the first woman to head one of the major French houses (of which there are two) in some time. It’s been a long time, but there is precedent, the path forged by gals named Elsa, Madeleine and, oh yes, Coco.

Yet the couturiers are not their milieu’s only creators. While at Fendi, Lagerfeld gave voice to his romantic side, at Chanel, he made an overt gesture of gratitude to the petites mains, or little hands, the seamstresses who make the clothes. They are under ever more pressure now because business is up, driven by women from new markets for whom limits of spending and self-imposed moderation don’t exist. “There are fortunes today in the world that make the former rich look poor,” he said, noting that now, top clients might order as many as 25 or 30 looks in a single season.

In a move that left his audience moved and gushing both privately and in press coverage, for his set, Lagerfeld transported the Chanel haute ateliers to the circular space beneath the dome of the Grand Palais, under the watchful eyes of the house’s four premieres, Mmes. Josette, Cécile, Jacqueline and Olivia. Chanel had two shows, each featuring half of the haute seamstresses, so all got to experience the moment.

These gifted, anonymous craftspeople are the couture every bit as much as the couturiers for whom they work and the clients for whom they sew. “People can be shocked [about the money clients spent on couture],” Lagerfeld said. “But it’s a good thing — to get that money back on the market. It pays a lot of salaries. There’s nothing bad about it. It’s an industry.”

Spoken in the language of the new couture.