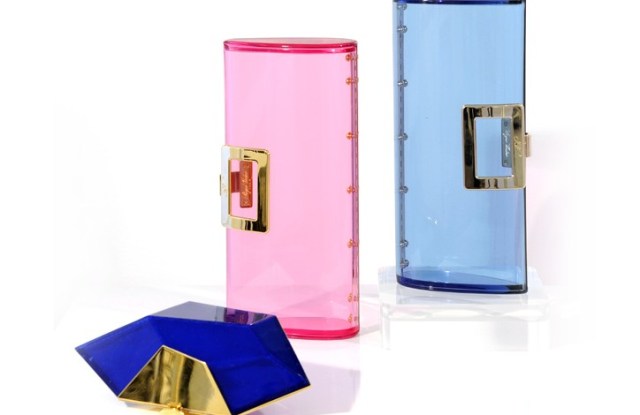 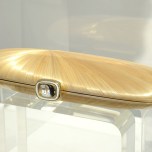 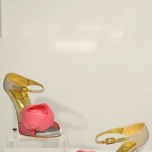 For Roger Vivier’s third limited edition Rendez-Vous collection, the ingredients were mostly au naturel (i.e., flat sandals made from leather-effect wood), but the allure was ultrasophisticated. Presented against a backdrop of lush plants and colored birds in wicker cages, creative director Bruno Frisoni said he was in a Mediterranean mood. He also wanted to honor two muses: Mona Bismarck for her sense of minimalist elegance, and Elizabeth Taylor for her “incandescent sensuality.” Bismarck’s character won over here, with the emphasis on quiet luxury. Frisoni’s take on the minaudière was certainly unique, with inlaid golden stalks of straw arranged in a sunbeam formation. Bags and sandals were done in soft, hand-draped taupe jersey, while ropes of white beads lent texture to a clutch with contrasting colored beads at the clasp. The palette was primarily in sandy tones, but fun pops of color surfaced on clutches done in bright clear plastics or in the bursts of fabric flowers, while, on a playful note, one sweet summery sandal had a hot pink cotton candy organza swirl adorning its toe.