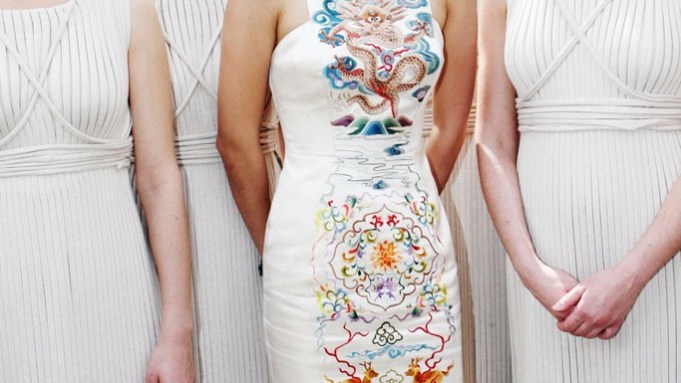 If there is Haute Couture in China, it would have to be in the Rose Studio by Guo Pei. But it is nothing like any atelier you have seen in the West.

To start with, Rose Studio does not have a fancy address like Avenue Montaigne. It’s located on the northern outskirts of Beijing in a nondescript three-story office building. There is construction all around — instead of being surrounded by fashionable shops, it’s enveloped by construction cranes and bulldozers. The neighborhood is more like Hoboken, N.J.

Yet, Rose Studio boasts an annual turnover of 50 million yuan, or $8 million, and has a stellar client list of over 500, which is comprised of a Who’s Who of A-list China.

Guo is not a very high-profile designer. When I inquired about her style, she told me that, instead of a famous name, what makes her stand out is that she can execute the most complicated designs right in her studio. “Designers in China now do not know manufacturing,” she pointed out, “they all want to be famous. But I am old school, I learned design when there was no design school in China.” Indeed, Guo studied garment design and manufacturing in the early Eighties, when educating designers was all about patternmaking and manufacturing. After graduation, Guo worked for a local manufacturer for 10 years before starting her own business.

“I knew all about manufacturing,” she said, “and my husband taught me about fabrics.” Guo’s husband is a Taiwanese businessman who runs a family textiles business. “When we got engaged,” Guo said, smiling, “he asked me whether I wanted a rock on my finger or 50,000 yards of free fabric. I took the fabric.”

Guo does not have regular fashion shows. “I do fashion shows for myself and the people who work in the studio,” she explained. “My shows might happen once a year or twice in three years. It’s not about seasons.” Her show pieces are Chinese embroidery on steroids; they are so heavy that models probably need to lift weights before trying to carry them down the runway. They are total fantasy, extraordinary in their own way.

Guo’s studio has its own embroidery workshop with more than 300 workers. On top of her office is a huge atelier not only for clothes, but also shoes and headpieces as well as buttons. Rose Studio has a showroom in the fashionable 798 art district and Guo is getting ready to open a bridal shop on the Bund in Shanghai.

“Do you have a dream of dressing China’s first lady one day?” I asked. She smiled but wouldn’t answer directly. “Do you dress her already?” I asked. The answer is the same demure smile that Chinese woman are known for.

“Really, like the way Michelle Obama has put Jason Wu on the radar screen as one of the hottest designers, a Chinese first lady client will do the same for you,” I prodded.

“It’s wrong to think that way,” Guo finally said. “We must think of ourselves as service people; it’s wrong to use the first lady of China to promote myself. It’s not something that’s done here, not in China.”

I was shocked at her political sensibility. She must have dressed quite a number of officials and officials’ wives to develop such a politically correct attitude.

“What happened to Jason Wu only happens in the West. Can you imagine if the Chinese press talked more about a dress than the leader himself?” she mused. “The political clients I have all request that I make something very subdued and not eye-catching. The last thing they want is to outshine their husbands.”

“Is that your secret to success as a couturier?” I asked.

“In a way, “ she said. “I very often have to tell myself, I am just a service person, a seamstress. I don’t think of myself as a designer for some of my clients. I just do what they want and you would be surprised at how much politics there is in a dress.”

As much as this submissive attitude has won Rose Studio A-list clientele, it also nearly ruined the business in 2009. That year, Guo designed quite a few pieces for TV hostesses for the televised New Year Gala. After the show, a wave of Internet postings accused Guo of copying designs by famous fashion houses in Paris. When I asked Guo about this, she sighed and said, “My clients come in with photos and say, ‘Can you make this for me?’ Since then, I have learned from my mistakes.” Guo said despite the public belief that she made a fortune on the gowns, in fact, she has lost money working for CCTV. “They have no budget for costume,” she said. “They just rely on the fact that these hostesses want to look their best and would spend their own money for the gowns. So I cannot charge that much.”

“These are my favorite clients,” Guo said. “They cannot find their sizes in branded stores, so they come to me and I can make them feel beautiful.”

“Why did you choose this place as your office,” I asked. “It’s really hard to find.”

“It’s good to be inconspicuous,” she said. “Who would think that one is ordering a gown worth over 100,000 yuan on the fifth ring road?”

It’s all geopolitics, I guess.