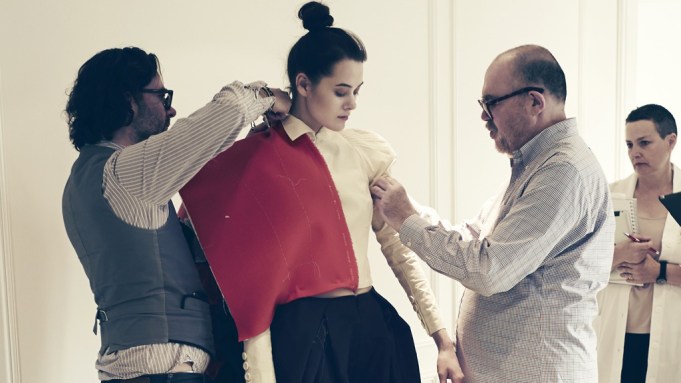 PARIS — “Schiaparelli is such an inspiration for all of us.”

That’s quite a statement, especially coming from Christian Lacroix, one of the most acclaimed and original couturiers of his generation, and a man with near-encyclopedic knowledge of costume history.

On Monday, the 62-year-old Frenchman will help kick off couture week in Paris by displaying 18 ensembles he designed as a onetime tribute to the late Italian designer Elsa Schiaparelli, whose label is being revived by Diego Della Valle, who controls Tod’s Group.

It’s a comeback steeped in anticipation — and tinged with irony as Lacroix will display his creations in the same salons at Les Arts Décoratifs where he paraded his final collection in July 2009, after which his couture house was reduced to a licensing operation and he moved on to a thriving career designing stage costumes, exhibitions, hotels and even tramways.

In an exclusive interview at Schiaparelli’s salons overlooking the Place Vendôme, Lacroix spoke excitedly about the project, describing in detail his first brush with Schiaparelli’s legendary style and articulating her place in the global fashion firmament.

A native of Arles in the South of France, Lacroix was all of 12 when he clambered into his great aunt’s attic and discovered her leather-bound cache of fashion magazines from the Thirties and Forties.

He fell upon a fashion shoot done in fall 1939 as war was enveloping Europe. He described a set designed to resemble a bomb shelter, inhabited by a “glamorous” woman wielding a flashlight and dressed in a Schiaparelli jumpsuit here, a classic knit suit there, or an evening ensemble with a curtain of sequins unfurling from the lining.

“I love that — how to be witty, spirited, elegant, Parisian, even during the war,” he said. “Colors, ribbons, whimsical hats — everything I love is coming mainly from her.”

Lacroix became one of the defining fashion figures of the Eighties and early Nineties, known for his pouf skirts, opulent fabric mixes and baroque buttons and jewelry. He made his name at Jean Patou before Bernard Arnault, chairman of LVMH Moët Hennessy Louis Vuitton, created a couture house just for him in 1987.

The heady early years — landing the cover of Time’s European edition and cameos on “Absolutely Fabulous” —were eventually supplanted by struggles: a revolving door of chief executive officers and strategies; a river of red ink; a sale in 2005 to Florida duty-free operators Falic Group, and, ultimately, a bankruptcy filing.

“It was so painful, the end of the couture house, when I had to fight more than sketch,” he recalled.

Yet Lacroix, dressed in a pin-striped denim jacket and waistcoat over pants the color of Limoncello, is sanguine about this brief moment back in the fashion spotlight.

Indeed, the Schiaparelli tribute collection and exhibition exemplifies what he loves about his post-couture career, working in an area “something between theater and museums,” and with his designs placed in a broader context than just the latest season or trend.

“It’s as if it was a musical about Schiaparelli, and I’m in charge of the costumes,” he said, erupting in chuckles.

Lacroix will present the dresses on mannequins with faces etched to resemble Schiaparelli herself. Visitors will arrive at a cagelike installation recalling the fantasy passageway that Jean-Michel Frank built for Schiaparelli’s first boutique in 1935.

The collection was strictly created for the exhibition and won’t be sold at retail. After the three-day showcase, which is by invitation only, the collection can be viewed by appointment at Maison Schiaparelli at 21 Place Vendôme in Paris. Lacroix will return to his multitude of operas, ballets and exhibitions, paving the way for a permanent creative director to arrive at Schiaparelli.

As reported first in WWD, Marco Zanini, an Italian designer who cut his teeth at Versace and Halston and who has been at the creative helm of Rochas since 2008, is expected to fill the post, completing the re-launch story some seven years after Della Valle acquired the Schiaparelli trademark and archive via a personal holding, Diego Della Valle & C. S.A.P.A.

The company recently said that a number of creative types — it could be a painter, a photographer, a sculptor, a movie director — would continue to celebrate Schiaparelli and provide their interpretation on an annual basis.

Born in Rome in 1890, Schiaparelli was seen as a key rival of Gabrielle Chanel in the Thirties and was known for designs heavily influenced by Surrealist art, such as her Shoe hat and Tears dress. She closed her Paris house in 1954 and died in 1973.

The brand, dormant for decades, gained major exposure in 2012 when New York’s Metropolitan Museum of Art hosted the exhibition “Schiaparelli and Prada: Impossible Conversations” at the Costume Institute.

Lacroix said it was easy to say “yes” to Della Valle, since he has known him since the late Seventies. They met when Lacroix was an assistant at Guy Paulin and Della Valle produced shoes for Paulin.

“I was even sleeping at his mother’s place when I was staying there for work. I saw his son being born,” Lacroix related.

For the Schiaparelli tribute, the designer focused on her defining silhouettes, including the hourglass, A-line, sari and bustle.

“It was an opportunity to go to the quintessential, to the core,” he explained.

Lacroix’s dresses, coats, capes and trouser ensembles were realized in a series of ateliers in Italy, with a dozen seamstresses converging on Paris for the final touches.

Asked if Schiaparelli cast a long shadow on his signature work, Lacroix replied: “Always. Sometimes it was not conscious. I think we were really the same, from the Mediterranean, Latin people fascinated by Paris.

“She loved collage, I loved collage,” he said, gazing up at a painting by Marcel Vertès, just installed over the mirrored fireplace in the main salon, butterflies in bell jars standing in the firebox rather than logs.

“You couldn’t help being impressed by her daring,” Lacroix marveled. “She was always inspired by the history of costume, and ethnic clothing. Without being pretentious, it’s exactly the way I like to do fashion, mixing countries and periods and putting them together in a nowadays way.”

It’s plain Lacroix relishes his burgeoning career outside the fashion industry, having found in stage clothes and exhibitions the perfect forum to indulge his passion for history married to the contemporary world. As he put it, “My feet in the archives, but my eyes, my mind, my nose, my ears in the here and now.”

Lacroix said he finds designing for the stage more rewarding than for boutiques or private clients, because the clothes contribute to a character, a narrative and a mood summoned by characters and a director.

“A dress supporting a voice, a skill, an actor, a ballet. I like when my work is contributing to something, and I love when it’s shared with unknown people.”

Now settled into a rhythm of two or three major productions a year, Lacroix is likely designing more clothes than ever.

For example, for Richard Wagner’s “Lohengrin,” opening in September at Opera Graz in Austria, he is creating 150 costumes for the chorus that will unite on the stage, each a unique confection executed in white and embellished with frills, lace and feathers.

The number and variety of other projects on his plate is dazzling. Among them:

• Curating an exhibition next year about the 18th century, with fashion curator Olivier Saillard, at Musée Cognacq-Jay in Paris.

• Overseeing the scenography for the Museon Arlaten, which is undergoing renovation slated for completion in 2014 or 2015.

• Designing a range of scarves, jewelry and ceramics that will be sold in the Louvre boutique for its new wing devoted to Islamic art.

• Designing two more Paris hotels — one on Rue de Charonne in the trendy Bastille area, another not far from the Meurice on Rue du Mont-Thabor — plus the Hôtel Jules César in Arles, and a hotel and restaurant in Abu Dhabi.

• Creating costumes for a production of Gaetano Donizetti’s “La Favorite” at Théâtre du Capitole in Toulouse in February 2014.

• Designing carpets for the Musée Galliera, which is due to open this fall after a long renovation. Lacroix’s creations will be featured on the stairs, in the library and on several floors of offices.

• Overseeing the scenography for the Roman amphitheater in Arles, including frescoes for the VIP areas and medieval towers — which will showcase equestrian arts from Europe’s best schools this summer.

“Arles is my favorite customer,” he said. “This is also my faithfulness to my childhood, when I was so in love with my town. I do it for pleasure, not to be famous, but just to pay back what that city gave me.”

He suddenly remembers another commission: Recently, the owner of the giant E.Leclerc supermarket chain came to him, offering carte blanche to mount an exhibition at a contemporary art space in an old monastery in Landerneau, Brittany. It’s the kind of project that gets Lacroix dreaming.

“This year was the fullest I have ever had in my life,” he said.

“I’m full of gratitude, pleasure. I should have left couture earlier,” he said, his face sprouting a knowing grin. “I think I was made for doing this scenography. I’m a kind of director or scenographer for daily life.”