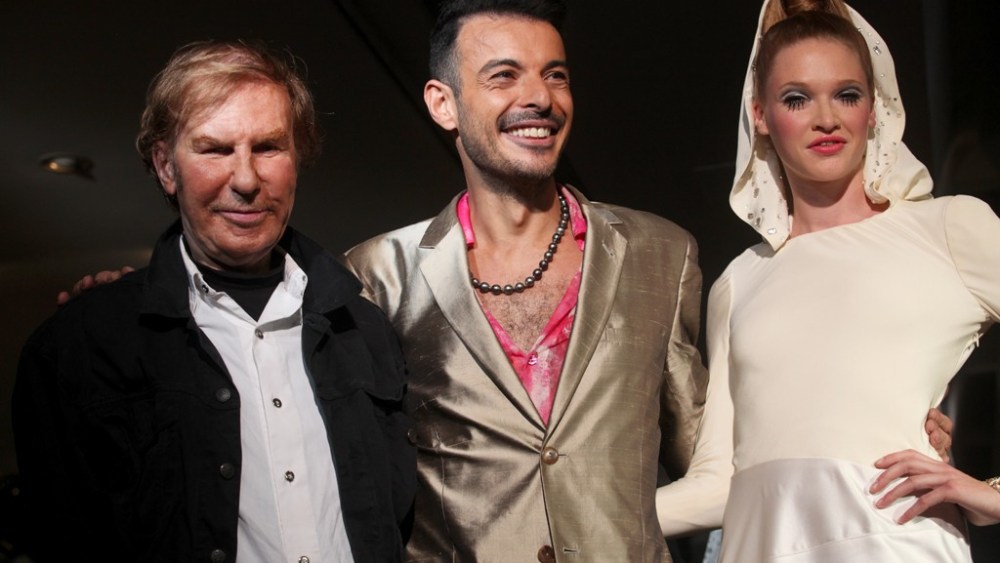 Claude Montana is back. The reclusive couturier, a pioneer of Eighties “power-woman” style, designed three looks for Eric Tibusch’s fall collection, his first creations shown since 2002.

The guessing game — which began with a cryptic invitation to the Tibusch show saying a certain C.M. had collaborated on the collection — continued throughout the event, with Montana, sitting front row, saying, “You’ll have to guess which ones.”

“Eric Tibusch’s was a nice proposition inasmuch as it concerned a small number of models; that’s why I accepted,” he said. “I designed three models that we just about succeeded with. It was difficult; it was difficult to plunge back into this whole story.”

Montana told WWD in 2010 that he wished to make a return to fashion.

“I absolutely wanted to come back, but it perhaps did not happen in the ideal conditions that we could have imagined,” he said on Monday evening, declining to elaborate further.

After posing for photos with Tibusch at the end of the show, he was cajoled into revealing which looks he had designed — a reversible black-and-white coat, a gray coat and wide pants, and a minimal silk and crepe wedding dress.

In his heyday, Montana was famous for his razor-sharp tailoring and skill with leather, as well as a masterful use of color.

The house that bears his name filed for protection from its creditors in 1997, and subsequently changed hands twice in as many years. It is currently owned and headed by businessman Jean-Jacques Layani, and continues to manage licenses for men’s and women’s rtw and accessories.

Could this mean we will be seeing more of Montana again? “Watch this space,” he said.