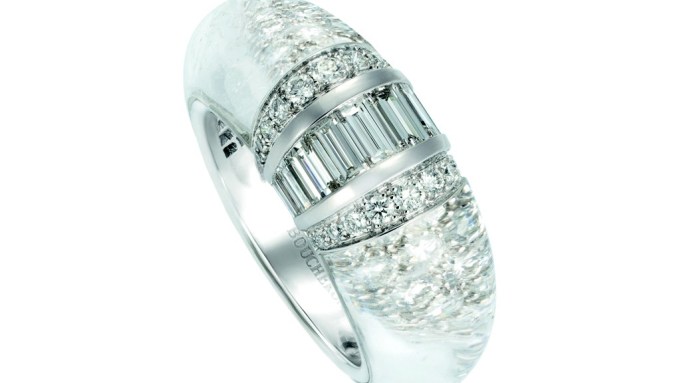 PARIS — Crack open the safe: Fine jewelry has escaped the confines of special occasions to become an everyday pleasure for the women wealthy enough to afford it.

That was the overarching message from the jewelers who displayed their wares on the sidelines of Paris Couture Week. Boucheron, Bulgari, Chanel, Chaumet, De Beers, Dior, Louis Vuitton and Van Cleef & Arpels were among those that staged presentations between July 1 and July 4.

Thierry Fritsch, president of Chaumet, said fine jewelers are responding to a shift in behavior among their well-heeled clientele.

“Our Chinese and Russian clients are spearheading this change, because they enjoy wearing fine jewelry for more everyday occasions, like going out at night,” he said. “In Europe, we still cling on to this image of fine jewelry as something you pull out only for the Red Cross Ball.

“We all want to evolve from that, so we have to produce pieces that are a bit daintier, lighter and easier to wear,” he added. “This represents an opportunity for Chaumet, because our style has always been more understated and delicate.”

Chaumet presented a dozen one-of-a-kind diamond-and-sapphire rings inspired by its signature Liens collection. They are part of a capsule collection designed by artistic director Claire Dévé-Rakoff, who, after joining the house last year, will present her first full collection for the jeweler in September.

“We decided to show rings because they are the easiest piece of jewelry to wear,” said Fritsch, noting that they account for 70 percent of Chaumet’s jewelry sales.

With her Cher Dior collection for Dior Joaillerie, designer Victoire de Castellane gave an irreverent twist to four traditional precious stones — diamond, ruby, sapphire and emerald — by pairing them with multicolored gems in crystallized sugar shades. “I like to imagine they have different flavors,” de Castellane said.

An offshoot of the Dear Dior collection she presented last year, the sets were organized into four families — Exquise, Etincelante, Majestueuse and Fascinante — and each came with a finely chiseled gold back inspired by the lace designs of vintage Dior couture gowns.

“Jewelry must always trigger desire,” de Castellane explained. “I sensed that women were attracted to these kinds of color combinations.”

Presenting the line, Lucia Silvestri, who was recently named Bulgari’s jewelry creative director, picked up the Gala in Costa Smeralda necklace and let its juicy rubellites, mandarin garnets and peridots tinkle through her fingers like pebbles. She turned it around to display the circular setting that allows light to filter through.

“The stones must float,” noted Silvestri, who began her career in Bulgari’s gemology department at the age of 18.

Jean-Christophe Babin, who recently took over as chief executive officer at the company, said Diva — which is inspired by the heyday of Rome’s Cinecittà film studio in the Sixties — has the potential of becoming a house pillar alongside the Serpenti and Bulgari Bulgari lines. Babin pointed to the “unexpected wearability” of the pieces.

“With some of our competitors, a piece worth 300,000 euros (or $385,250 at current exchange) can be worn only on very formal occasions, objectively seen,” Babin said. “At Bulgari, it can be extremely chic for formal occasions, but it can also seem perfectly appropriate with jeans.”

The lion, her fetish animal, is worked in three variations: sculpted stone, such as a solar yellow citrine or inky lapis lazuli; mosaic-patterned diamonds, and a frontal medallion motif that should trickle down into more accessibly priced pieces, joining existing pillars such as the Camélia and Comète ranges.

Chanel launched its fine jewelry and watches division in 1993.

Among the 58 pieces on show were the first two produced by Chanel’s atelier, which opened last December on the fifth floor of its flagship on Place Vendôme.

These include the one-of-a-kind Lion Royal necklace, which has been snapped up for 3.3 million euros, or $4.2 million. In platinum, set with 1,312 fancy-cut diamonds, 11 pear-cut diamonds, 21 brilliant-cut diamonds and six marquise-cut diamonds, it features a lion head pendant that detaches as a brooch.

A stone’s throw away, Boucheron celebrated its 120 years on the famed Paris square with the Hôtel de la Lumière collection, which consists of 120 unique pieces designed by director of creation Claire Choisne.

Among the 50 pieces on display were necklaces and rings combining diamonds with transparent rock crystal, or aquamarine and morganite in subtle pastel hues.

A tribute to the neighboring Ritz hotel, currently under renovation, the Perles d’Eclat necklace strings together 19 large rock-crystal bubbles that have been hollowed out, frosted and polished to reveal clusters of diamonds that appear to float inside.

The highlight of the collection is the Soleil Radiant set, which was inspired by King Louis XIV, who commissioned architect Jules Hardouin-Mansart to design Place Vendôme. In the display box, a necklace consisting of a spray of elements, set with 1,300 diamonds, curls around a rock crystal box studded with diamonds.

Hermès got a jump start on couture week, displaying its new jewelry creations at its flagship on Rue du Faubourg Saint-Honoré from June 14 to July 13. They included Niloticus, a capsule collection designed by Pierre Hardy as an homage to the crocodile leather used for Birkin and Kelly handbags.

Van Cleef & Arpels tapped a Sixties spirit for its Pierres de Caractère — Variations collection, an extension of the centenary collection it unveiled seven years ago.

The Oriental-flavored designs include a selection of oversize cocktail rings, such as the Pongal, named after the Indian monsoon festival. It features a 27.81-carat cushion-cut Colombian emerald surrounded by cabochon rubies and diamonds, in a setting inspired by the ornamental motifs of Mughal art.

Its Matinée d’Orient set, which loosely draws on the crown the house created for the 1967 coronation of Farah Pahlavi as Empress of Iran, sets off round diamonds with pear-shaped aquamarines and cabochon-cut turquoise in a delicate lacework made of articulated elements, designed to be comfortable to wear.

De Beers highlighted its diamond expertise with pieces inspired by water. The Phenomena collection is divided into five themes — Frost, Glacier, Reef, Stream and Crest — with different diamond cuts used to create frosty or sparkling effects. The Frost necklace, for instance, appears to float on the skin thanks to the almost invisible knife-edge wires connecting its parts.

Having established its house codes with all-diamond pieces, Louis Vuitton branched out with colored stones for the latest installment of its Voyage dans le Temps collection, designed by Lorenz Bäumer.

Spinels from Vietnam, Tajikistan and Tanzania, in shades from lilac to fiery red, sparkled on openwork Dentelle de Monogram rings and earrings, while a bright blue Sri Lankan sapphire added depth to a Fleurs d’Eternité pendant necklace. A 45.5-carat Australian black opal was the star of a chunky Galaxie Monogram cocktail ring.

Hamdi Chatti, vice president of fine jewelry and watches at Louis Vuitton, said the pieces were designed to be fluid enough for everyday use.

“There might not be a special occasion to wear them, so it’s the customer who creates the occasion,” he said. “This can apply to a product costing 5,000 euros (or $6,420), but it could also be a product worth 3 million euros to 5 million euros ($3.8 million to $6.4 million), depending on the means.”

Chatti linked this evolution to the fact that women are increasingly choosing jewelry for themselves. As he put it, “Before, there was always a husband or a father at their side. The issue is not who is paying — it’s who chooses the piece, and how they wear it. It’s a revolution in the world of jewelry.”