The pendulum for fine jewelers showcasing their newest collections in Las Vegas will swing away from the cautious climate of the past few years. 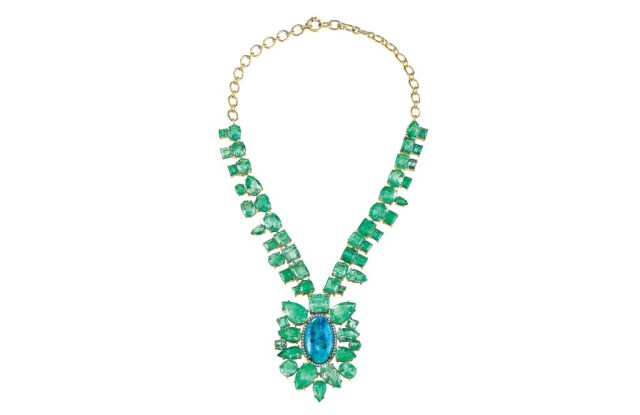 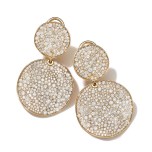 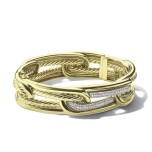 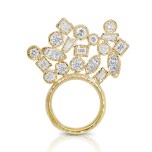 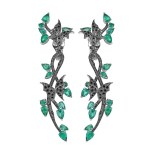 Fine jewelers are not holding back.

A cautious climate in fine jewelry over the past few years — due to a combination of volatile precious metal prices and sluggish economic conditions — resulted in designers devising ways to use less gold or introducing or expanding existing silver lines. But the pendulum for fine jewelers showcasing their newest collections will swing in the opposite direction at this year’s The Couture Show, which begins today and runs through Monday at the Wynn Las Vegas: Bold is back.

The soaring stock market, rising house prices and the slowly improving economy are causing an increasingly confident consumer to once again seek statement jewelry. Shoppers are opening their wallets as gold prices slide from their historic highs, causing the silver frenzy that hit the market in 2011 to subside.

As a result, this year’s couture show is expected to highlight a slew of one-of-a-kind pieces from Irene Neuwirth, Stephen Webster, Ippolita, Monique Péan, Phillips House, David Yurman, Pomellato, Yossi Harari, Faraone Mennella, Colette, Ivanka Trump, Coomi, Ileana Makri and Melissa Joy Manning. Although silver is still in the picture, there is less of an emphasis on the metal.

“Two years ago the entire industry was coming out with a silver line and everyone was talking about the price of gold. There was a crazy focus on silver jewelry. Even though the market for gold has come down in the past couple of months, it’s been relatively stable the past two years, and we’re talking about it [the price] a bit less,” Ippolita chief executive officer Joe Cavalcante said.

Cavalcante maintains that although the brand is a gold house first, silver (which launched at Saks Fifth Avenue in 2008) makes up roughly half of the overall business. To him, the gold and silver customers are distinct, and the two don’t actively trade between the two metals.

Cavalcante believes consumers have become accustomed to the new prices for gold jewelry, which have caused Ippolita to adapt to its designs. The brand — sold at just under 350 doors globally including Saks Fifth Avenue; Harrods and Liberty in London; Holt Renfrew in Canada, and Harvey Nichols and Bloomingdale’s in Dubai — saw nearly 30 percent growth last year, according to Cavalcante. Ippolita also opened its first retail door on Madison Avenue in New York last September, and its debut men’s collection arrived in stores last week.

“The customer has adjusted a bit it to the new gold pricing level. The initial shock of marking up 18-karat gold jewelry has gone away. They understand that this is what it costs now,” Cavalcante said, noting that a trend he’s observed at retail is that people now want expensive and unique jewelry. “If it’s a fabulous piece and it’s expensive, it will sell and it will sell first.”

There has been an increase in the sale of pieces ranging from $7,500 to $20,000 — the higher end of Ippolita’s range — and the team has introduced more pieces at these price points over the past year. The “super diamond intensive pieces with big surfaces of pavé” include a pair of oversize chandelier earrings that retail for $22,500.

David Yurman’s chief marketing officer, William Paretti, said the company has seen a significant increase in gold sales over the last 12 months. So much so that the brand has developed a gold version of the silver Labyrinth collection introduced last August. The first collaborative effort of David, Sybil and Evan Yurman, the gold pieces — retailing from $9,500 to $19,500 (newer silver pieces start at $3,200) — will make their debut at the show.

“Our customers are looking at gold and responding to it more than they have in the past. The value in gold is a big point of it.”

David Yurman will also show its new Willow collection, a 36-piece line inspired by the willow trees in the Yurman family’s backyard in the Hamptons. The jewelry will be offered in both silver and gold, featuring slender, featherlike stalks and ranging in price from about $1,100 to $20,000.

Faraone Mennella cofounder Amedeo Scognamiglio predicts 2013 sales will increase by 50 percent, due largely to the opening of three boutiques: in Porto Cervo in Sardinia; in Azerbaijan’s capital, Baku, and in Harrods in London (doubling the brand’s presence in the U.K.).

He contends that rising gold prices have never affected the fine jewelry demand for the brand. However, when “gold loses a little ground,” the brand has seen its consumers buy then.

Scognamiglio said the U.S. — the company’s biggest market — is the only region where the brand can feel an immediate impact in jewelry sales after a spike on Wall Street.

“Our business at Bergdorf Goodman is almost like a thermometer of luxury and the U.S. economy,” he said, adding that the reaction to economic conditions and market swings varies worldwide. “In London, our top customers are all from the Middle East and former USSR republics. That type of customer is immune to the stock market’s mood, [and] they shop with a different mind-set — luxury for the sake of luxury.”

As for the brand’s “resort” boutiques in Capri and Porto Cervo, Scognamiglio expects a “booming” season, but to this he attributes a pure luxury lifestyle attitude.

Additionally, he’s witnessed luxury consumers in the past two years considerably upgrading their jewelry purchases in terms of quality and prices. They want “uniqueness.”

Janet Goldman, ceo at Fragments Showroom, which works with brands exhibiting at the show like Wendy Yue and Colette, has seen the same trend.

“Retailers are looking for the main attractors, the pieces that draw the eye to the collection. Every designer must feature these ‘over-the-top’ pieces that push boundaries. They are the ones that generally sell first,” Goldman said.

Irene Neuwirth, nominated for a CFDA Swarovski Award for Accessories for her 13-year-old line, said she can’t keep the most unusual pieces — often the most expensive ones, which verge on price points of $200,000 — in stock. At one time these weren’t the quickest pieces to sell, but now, especially when she posts images on social media like Twitter, Facebook or Instagram, this jewelry is selling before it even hits stores.

“It’s a different time in jewelry, and people are buying over the top. They want a different fine jewelry than they are used to. They want something more unusual that shows what their style is about. Jewelry in general has gotten so mainstream and everything looks the same,” Neuwirth said.

She has a collection of more basic jewelry that she reproduces regularly — and for a long time most of her business was generated from these “generic pieces.” At this year’s couture show, she will introduce about 70 one-of-a-kind items with stones like lavender, Mexican fire and Lightning Ridge opals, as well as more emeralds than in previous collections.

Stephen Webster said his 15th time at Baselworld last month was his best show by far. Retailers were confident in placing large orders — all centered on the designer’s high-end pieces. Webster’s Black collection, where prices start at $10,000, includes the Fly by Night Within the Forest series — consisting of 18-karat white gold with black diamond and emerald nightingales, thorns and moth’s wings — as well as a Couture Voyage cuff, inspired by the Madagascan moth and containing more than 14 carats of diamonds.

“This is very different to recent years where caution ruled. The stability in the gold market more recently has helped massively with giving long-range accurate pricing,” Webster said.

Business is split between the U.S., Russian-speaking countries, Europe and the Middle East, and while sales in the Middle East and Russia are booming, business in Europe is growing, albeit at a slower rate. He said that the brand is just entering the Chinese market, and he anticipates the crackdown in luxury in the region will be an obstacle.