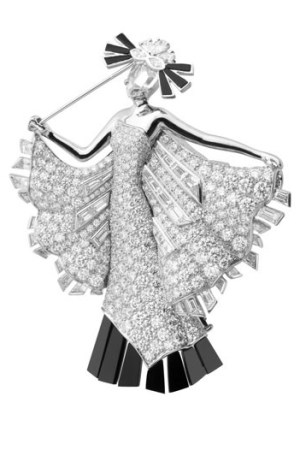 Nicolas Bos, vice president and worldwide creative director of Van Cleef, who is also president and chief executive officer of the jeweler’s Americas division, said the starting point was a photo of Liz Taylor taken by Cecil Beaton in 1971 at the Proust Ball, to which she wore a major gold and diamond necklace by the house reinterpreted as a headpiece.

Using new millennium jewelry techniques, Van Cleef’s latest collection captures the festive splendor of the bygone tradition, using both figurative and abstract designs — a monochrome onyx and diamond masked dancer pin, for instance, or a graphic signet ring striped with baguette-cut diamonds and black spinels. The latter piece boasts a spectacular 15.54-carat vintage oval cut diamond at its center. Evoking the colorful 1969 Oriental Ball, held on Paris’ Ile Saint-Louis, with Salvador Dalí and Brigitte Bardot among guests, was the striking Kingfisher necklace, the house’s first necklace ever constructed around engraved stones, which form its structure, set on a white gold mount. It features sculpted layers of turquoise flowers and leaves, offset with round diamonds and five oval-cut red spinels at 30.63 carats.