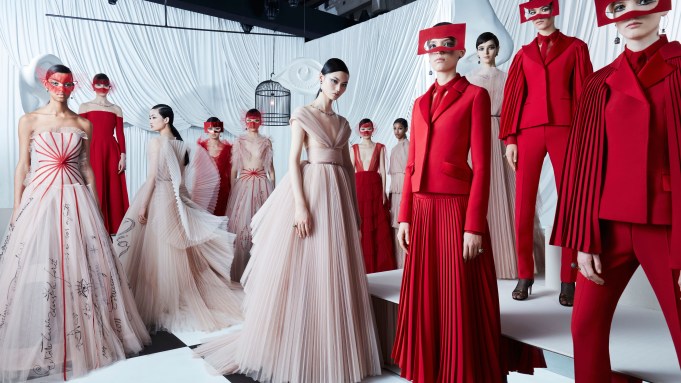 According to artistic director Maria Grazia Chiuri, the inspiration for the new pieces, fashioned in red and pink, came from Dior’s archives, where she found an object that signified the fascination Christian Dior himself had for China.

“I found this fan in the archive that Christian Dior did for his first show. He also used the fan to put on top of the Miss Dior perfume because he wanted people not only to see the collection but to smell the idea of the Dior house. This capsule translates parts of the Dior archive into the pleats, like the fan. We work with the pleats of Mr. Dior, like the Bar jacket, the skirt and also the evening dress,” she explained.

A large coterie of Dior people has been in Shanghai preparing for the show and taking appointments with couture clients. For Chiuri, taking this collection, which was shown in January at the Musée Rodin in Paris, on the road is an ideal way to help educate consumers about the importance of couture and its role at the center of the Dior universe.

The show was followed by a masquerade ball, a surrealist affair (the main spring 2018 couture collection was inspired by the Surrealist movement) with human chess pieces, go-go dancing playing cards and moving statues.

Only last week Dior held an opening at Shanghai’s Museum of Contemporary Art for a photographic exhibition titled “The Art of Color,” which doubled as the launch in the China market of Dior Beauty’s coffee-table book of the same name.