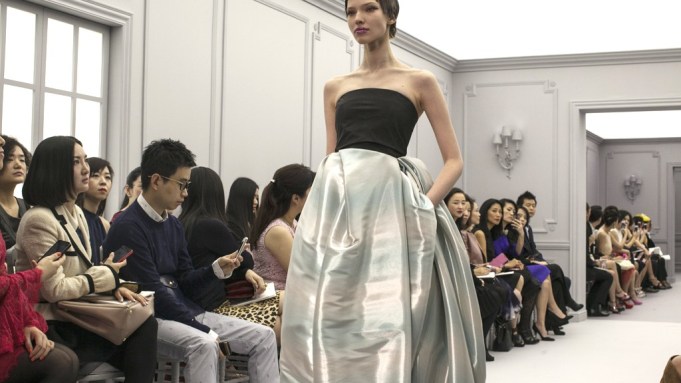 SHANGHAI — Christian Dior transformed three floors of a vacant building on this city’s famous Bund waterfront into a Parisian-inspired salon to showcase its 2013 spring couture collection to Chinese customers on Friday night.

It was the second time Dior has held such an event in China. The first couture show took place in Shanghai last April. Dior president and chief executive officer Sidney Toledano said the success of last year’s event was the main reason to replicate it and that the brand will continue to ramp up events in China as it witnesses more clients here seeking luxury products beyond handbags, accessories and ready-to-wear.

“We have a big demand for high-end products,” Toledano said. “With China being so key for us and with the potential for haute couture clients here, from a business point of view the impact of this presentation is key. We plan to do it every year.”

Around 300 guests attended Friday’s event, including Chinese actress and model Zhang Ziyi; Angelababy, a Hong Kong film star, and Chinese actress Sun Li. The show, which took place in an intimate space with decor emulating the salons of Dior’s couture salon on Avenue Montaigne in Paris, was followed by dinner in a romantically lit room filled with flowers and candles overlooking the Bund. Dior will showcase its 2013 fall men’s wear collection later this month in Beijing.

Toledano declined to provide sales figures for the brand in China but said it is a “key market.” He said that Dior rtw, accessories and cosmetics are all performing strongly on the mainland and that there is new momentum with sales in men’s wear categories.

The executive said what has been surprising for Dior in China is how quickly consumers’ tastes have evolved and that its clients here are not only wealthy but also young and informed about fashion. “They look for refinement and sophistication,” he said. “I am really, really impressed. They go fast in terms of getting information.”

He compared Dior’s experience in Japan with the company’s experience in China. When Japan’s economy was at its height, Toledano said, customers there were more interested in accessories and fashion. Couture was never a strong category. “Japanese haute couture clients, there were some of them, but even at the peak of the economy in Japan, we did not see what is happening here,” he said. “Japan was different.

“China is a chance,” Toledano said. “It is really a chance.”

Dior, which has had a presence in China for about 30 years, has 20 women’s rtw boutiques, 17 men’s stores and one jewelry and watch unit on the mainland. It will open another women’s and men’s wear store on April 18 in Shanghai in L’Avenue, a luxury mall in which LVMH Moët Hennessy Louis Vuitton has invested. Otherwise, future expansion will be “step-by-step,” Toledano said. Dior does not have a target number for store openings and plans on upgrading existing infrastructure rather than opening too many additional retail spaces.

A shift away from breakneck expansion in China to more calculated openings and an emphasis on improving in-store experiences in existing locations has been a key topic for many luxury players as they adjust to Chinese consumers who have become more sophisticated in both their demands for products and their expectations of customer service.

In recent weeks, luxury players including Gucci, Burberry and Louis Vuitton have revealed plans to slow expansion in China and to not offer logo-centric products in smaller cities, which has been a common strategy of the past to reach newer luxury consumers seeking such products to show off wealth and status.

Toledano said that Dior has not faced such a challenge here. The brand eradicated logo products on the mainland six years ago and caters to consumers outside of the more sophisticated Shanghai and Beijing by utilizing staff with knowledge of regional tastes and trends.

“From the beginning, we said we would position Dior as a top brand,” he said. “This has been one of the good decisions we took. We have not compromised, and we have gained market share with the high end. I think the image here is very strong.”

He also said that Dior has not witnessed any marked slowdown on the mainland, where luxury spending has waned, largely due to a new government here dead set on rooting out corruption, which often takes place in the form of gifting expensive watches and accessories. Chinese President Xi Jinping has sacked a number of officials for extravagant spending and has ordered government employees to cut back on big banquets and use carpools instead of motorcades of high-end cars. “We are not having an impact,” Toledano said. “Maybe in some men’s watch business you could see it. I don’t know.”

The executive said that China is beginning to have an impact for Dior’s business in other markets. Aside from Chinese tourist spending overseas, burgeoning Chinese diasporas in Australia and the U.S. are resulting in higher demand for couture in those countries than before.

Beyond reaching more consumers in China, Dior is looking into other markets in the region, where Toledano projects there will be demand in years to come not only for luxury but also for couture. Just before he arrived in Shanghai, Toledano was in Hanoi, where the brand opened Dior Women and Dior Homme boutiques in late March. In January it opened a women’s wear boutique in Ho Chi Minh City.

Vietnam “is not at the level of China, but the development there is unbelievable,” Toledano said. “In Asia, I see Hong Kong, Singapore, Indonesia, Thailand, the whole region is moving very fast, and for the long term I am very confident.”