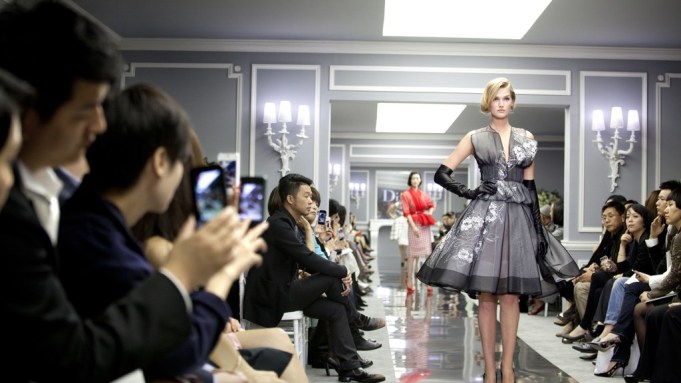 SHANGHAI — Christian Dior reprised its spring couture show here over the weekend as it opened the doors of an exhibition of French photojournalist Gérard Uféras’ pictures documenting the work behind the collection.

On Saturday, some 300 made their way to the Bund-side House of Roosevelt to take in some of China’s top models, including Liu Wen and Emma Pei, stomping down a silver catwalk to a soundtrack of Lana Del Rey. Other VIP guests included Zhang Ziyi, Ni Ni, Guo Jingjing and Michelle Reis.

Dior president and chief executive officer Sidney Toledano said it was logical to bring the show to China as many couture buyers hail from the country.

“Two years ago we had an event on the Bund and showed mainly pieces from the cruise collection, but we decided to include a selection of eight haute couture looks and the response was amazing, so we knew we had to come back again to show the entire haute couture collection,” Toledano said.

The Dior contingent that descended on China’s financial capital late last week included around 30 atelier staff who were booked for appointments with Chinese clients for the days after the show itself.

Dior was an early entrant into the Chinese market — opening its first Beijing store in 1997 — but Toledano said the country’s rise to the world’s most promising market for couture has been unexpected by many in the industry, himself included.

“Back then, people were asking what we were going to sell in China, maybe lipsticks or key chains, but very quickly it was apparent that the real desire and demand was for the highest quality, ready-to-wear was embraced very quickly and now the top of the pyramid of Chinese consumers are already moving beyond that to haute couture,” Toledano said.

The Uféras photo exhibition provided a behind-the-scenes peek at daily life in Dior’s Avenue Montaigne atelier. Uféras said he was confident the Chinese audience would appreciate the uniquely French storytelling of the exhibition, which gives context to the process behind the collection.

“I think I have a certain way of taking pictures that is really French, with an idea of elegance, so maybe these points are close to what Dior represents,” Uféras said. “For me, the idea of the woman and the idea of the dress that I tried to express in my pictures is very close to the idea Monsieur Dior had about women and about elegance.”

Bill Gaytten’s second and final couture collection for Dior featured Fifties-style silhouettes, sheer skirts and delicate bead work. A particularly warm round of applause was reserved for the outgoing interim designer when he came out to take a short bow at the show’s close. After an exhaustive search, Christian Dior last week announced the appointment of Raf Simons as the brand’s new artistic director.

After a protracted search, Dior last week announced the appointment of Belgian designer Raf Simons as the brand’s new artistic director. Toledano seemed both relieved and happy when asked about the addition of Simons to the Dior team.

“It’s a very exciting time. I always said that the right person would come along when all the stars aligned and that’s exactly what happened last week,” Toledano said. “[Simons] has already begun to lay out his vision for where he can take Dior in the future and I think we are all very excited by that vision.”