More was more at the fall-winter haute couture shows in Paris, where raven hair, ruby lips and all-out ornamentation ruled the runways. 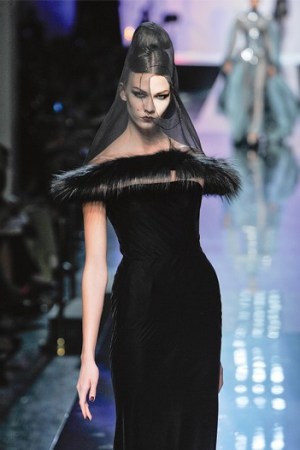 More was more at the fall-winter haute couture shows in Paris, where raven hair, ruby lips and all-out ornamentation ruled the runways.

Hairstylist Luigi Murenu explored the dark side this season. At Giorgio Armani Privé, he gave models short, spiky, cropped tops, while at Givenchy, he slicked down the models’ hair with shiny black paste, then parted it in the middle and rolled it into a bun for a chic severity. At Christian Lacroix, during what might have been the designer’s last couture show, things took a more elegant turn, with black turbans enveloping the models’ heads.

Enough is enough, sometimes, as was the case at Dominique Sirop, Lacroix and Valentino, where makeup took a turn for the ladylike. Skin was creamy with the gentlest sheen, cheeks gently sculpted and eyes enhanced with lashes placed just so.

The couture wouldn’t be half as haute without the element of fantasy, and even dismal economic times couldn’t dampen designers’ decorative sides. The effects ranged from the outré (Givenchy’s Middle Eastern–inspired gold facial decoration) to the out-of-this-world, as with Lacroix’s flower-bedecked bride,
whose lavish headdress conjured up visions of the Virgin Mary. Reams of black ribbon decorated tresses at
Chanel and Alexis Mabille, while lacy accents added drama at Valentino.

From Bardot to Barbarella, the classic siren to a modern-day minx, Jean Paul Gaultier took as his theme all things Tinseltown. That translated into a wide array of beauty looks, from Veronica Lake–inspired Forties waves to cropped bobs. On the makeup front, Tom Pecheux gave most models a dramatic smoky eye—on some, offset by a nude lip, on others, paired with a bold crimson mouth and matching nails to boot.

Each season, makeup artist Pat McGrath and hairstylist Orlando Pita unleash flights of fancy on the runway of Christian Dior that are as electrifying as the clothes. To complement John Galliano’s celebration of Dior’s classic codes, McGrath worked a retro theme, with Fifties-inspired arched brows and jauntily lined eyes set off by bright lips, while Pita updated the updo with wildly crimped confections.

Dutch model Lara Stone is the reigning first lady of fashion— French Vogue devoted its entire February issue to her, while the August W featured an in-depth cover profile of the gap-toothed beauty. Her appeal was on full display during the fall couture shows, be it as a bombshell Bardot doppelgänger at Jean Paul Gaultier or blushing bride at Chanel.