The collection was inspired by the Neapolitan designer's vision of paradise and is being presented in Milan and Paris by appointment. 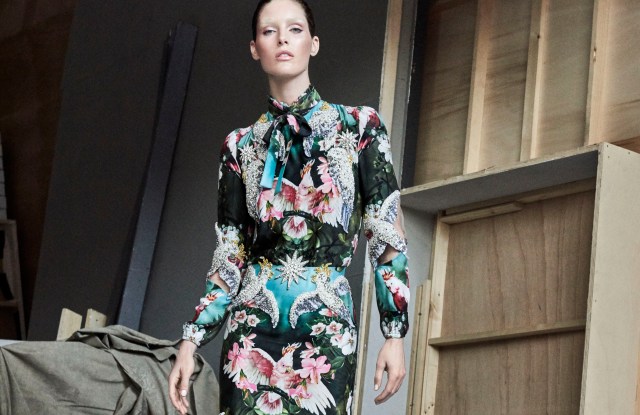 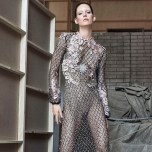 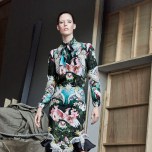 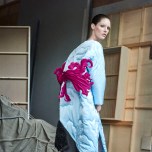 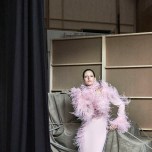 MILAN — Francesco Scognamiglio is not one to mince words. In his frank manner, the Neapolitan designer said he decided to bow out of the Paris couture schedule because the calendar had become “too confusing with American brands showing ready-to-wear and pre-collections.” Through client appointments in Milan and the French capital, Scognamiglio wants to manifest “a sign of rupture. I am looking for something more discreet.”

Discreet, the collection was not. After all, Scognamiglio is not a minimalist designer and, for his fall couture collection, he reached for the sky. Literally. In particular, the garden of Eden and his vision of paradise were the inspirations for the lineup. Explaining the reasoning behind this, the designer said “it was a spontaneous idea, I was thinking of an almost surreal scenario, something that is unreachable, above the sky.” Scognamiglio said he worked with a painter who translated his thoughts into a print of luscious leaves, lilies, blue skies and colorful parrots, seen on a fitted dress with a soft bow at the neck and a flounced, uneven hemline, and lit up by crystal stars. “These are almost like sacred birds,” the designer said.

Scognamiglio said the padded silk coats, embroidered with feathers or crystals, “are reminiscent of ancient China and the Eastern world. Crystals and stars embellish the coats.” The craftsmanship was remarkable. Feathers also adorned pink or white column dresses.

To present the looks, Scognamiglio asked Giampaolo Sgura to photograph Hilary Rhoda. “She is one of the most beautiful women and has a special purity and American image,” he said. “With Giampaolo, we’ve been friends for 18 years and our careers developed together.”

Scognamiglio, who in 2015 sold 30 percent of his company to Y Capital Management, debuted in Paris during couture week in July last year.

The Neapolitan designer made his runway debut in 2000 at Alta Roma during couture week in the Italian capital.