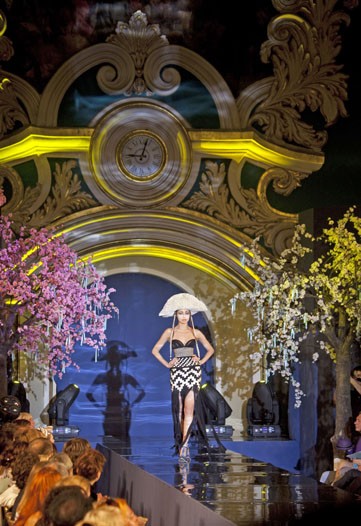 MOSCOW — To Jean Paul Gaultier, Russia is a land of contradictions.

“Russia is a young and fresh country, filled with all the spontaneity of youth. At the same time, it’s got great tradition and a very old culture,” Gaultier said in the middle of a five-day trip to Moscow last week. “It’s a great and very exciting mix.”

What better site, then, for Gaultier to hold his first couture show in Russia than in the gilded hall of one of the capital’s busiest train stations. Leggy Slavic beauties donned Gaultier’s summer collection, as well as select retrospective pieces.

Overhead, an ornate ceiling was decorated with Soviet-era images and a painted red banner reading “Workers of the world unite.” Outside the train station, hundreds of passengers gathered to catch a glimpse of Moscow’s beau monde.

It’s a rough contrast that inspires Gaultier, who first visited Moscow in 2005 to mark the opening of his first boutique in the capital. That trip was followed by ready-to-wear and couture collections imbued with influences from Russian folklore.

“It’s a creative explosion here,” said Gaultier. “With this romanticism and this madness, how could you not be creative?”

For the past year and a half, that creativity was not matched by high spending. The global financial crisis hit Russia harder than many countries, sending retail crashing by around 30 percent.

Gaultier’s visit is a sign that trend might be reversing, said Mikhail Kusnirovich, chief executive officer of Bosco di Ciliegi, the luxury holding that represents Gaultier and dozens of other Western labels in Russia.

“We thought about organizing this a year ago but realized it wasn’t the time,” Kusnirovich said. Now, with retail showing incremental recovery since the start of spring, the time seemed right, he said.

Bosco plans to open another Max Mara boutique this year, as well as 21 shops devoted to the group’s Bosco Sport brand.

Despite the crisis, Gaultier said he saw Russia as a country in the midst of massive growth. “Russia is changing so quickly. It’s moving and really opening up to fashion,” he enthused.

That’s a message Gaultier managed to encapsulate in his show at Kazan train station, one designed, he said, to represent the possibilities of travel. “It’s always been one of my dreams to do a show at the Gare de Lyon,” Gaultier said of the landmark Paris station. That has never worked out and, instead, he said, “I’m realizing this dream in Moscow.”