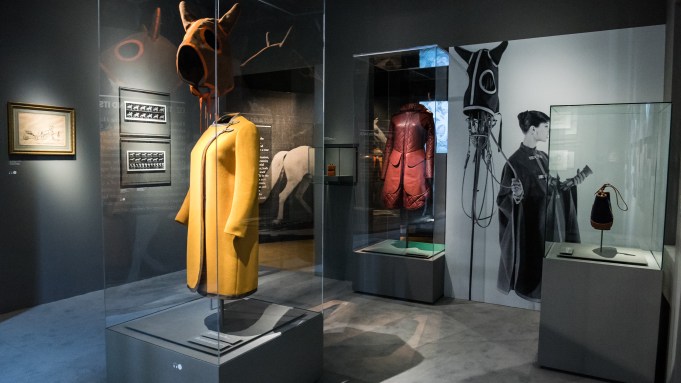 The veil is being lifted on Hermès at a temporary exhibition that opened to the public Saturday at the company’s Beverly Hills boutique.

“Harnessing the Roots,” curated by Bruno Gaudichon, begins in the back of the Rodeo Drive store and starts with the story of bridles and the house’s history with horses and the equestrian world.

“For Hermès, it is the first time that we open the veil because we are rather discreet on our past,” said Menehould de Bazelaire, Hermès artistic director of cultural patrimony, who was in town from Paris for the opening. “We don’t want to be proud of what was made before by Hermès. We always want to remember to be proud of what we will make tomorrow. It’s our challenge.”

Visitors in the exhibition’s first room are greeted with a terra-cotta horse dating back anywhere from 2500 to 1900 BC, which is juxtaposed with a 19th-century Hermès bridle just a few paces away. Both pieces come from the Émile Hermès collection, with the terra-cotta statue the oldest piece of the group.

“This was the idea of Émile Hermès when he started his private collection,” de Bazelaire said. “He wanted to create a bridge between the past, the origin of the horse and civilization together conquering the space, because with the horse we’re able to conquer the space. And the story of Hermès, he didn’t want to be nostalgic about the past. The idea and the message is ‘Go further. Gallop….Conquer the space.’ This collection is telling plenty of stories of mobility [and] movement of human beings.”

“It’s really stitching the past with today,” said Hermès executive vice president Charlotte David, who also flew in from Paris for the unveiling.

“Harnessing the Roots” is the first in a series of exhibitions, called “Hermès Heritage,” focused on sharing the house’s history with the public. This particular iteration of the series remains in Beverly Hills through April 7.

“We’re really, really pleased to do it here in L.A. because the concept of heritage is a kind of show,” David said. “The real purpose of ‘Hermès Heritage’ is really the root for us from 1837 to today and how you can really see in our new collections some key clues that are coming from the past. That’s quite lovely to have the opportunity to open up our history to everyone and for people to get a sense the Apple Watch Hermès actually is not coming from out of the blue but really is linked to the heritage.”

Following that initial room, visitors then make their way past the back of the Hermès boutique walking by blown up pictures of photographer Eadweard Muybridge’s series of images capturing a galloping horse — famous because the set of images proved then-California governor Leland Stanford correct that all four of a horse’s hooves are off the ground for a very brief period of time when moving.

The exhibition continues with four more rooms themed around equestrian-inspired fashion for horse and human; saddles; buckles and their influence on accessories, such as the intricate necklace on display made of rose gold, diamonds, leather suede and sapphires from the contemporary collection of 2014, and the references to ties and straps in pieces, such as sandals from the Thirties all the way to the Apple Watch.

Why the exhibition came to Beverly Hills is a continuation of the momentum that began with last year’s “Dwntn Men” runway show and party in downtown Los Angeles, David said.

“We wanted to keep the conversation going with our guests and our clients,” she added. “We felt that we highlighted the men’s universe last year. Maybe we should have an opportunity to bring a bit more knowledge…so that’s why we decided to do it in L.A., but we’d love to also have it in New York and maybe in Miami. Let’s see how it goes.”