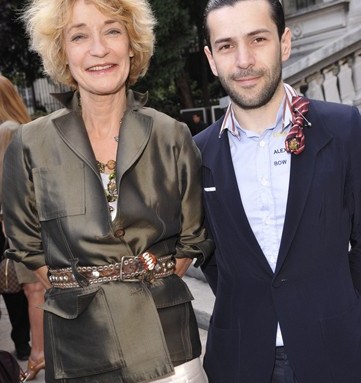 Paris’ Musée Galliera was festooned in green and white, Madame Carven’s signature colors, which were featured in at least one outfit in each of her fashion shows. Many guests also wore the colors in homage.

A picture of health and elegance, the petite designer, who was born the same year that Louis Blériot became the first man to fly across the English Channel and construction began on the Titanic, conducted interview after interview while keeping watch on the rest of the party.

“All my life, I always have an eye to what’s happening,” she said, as she surveyed guests, who included Loulou de la Falaise, Yves Carcelle, Alexis Mabille and Jean-Charles de Castelbajac.

During that time, Madame Carven has seen the number of couture houses dwindle from some 100 when she founded her company in 1944 to just 11 today. “Now, couture is too expensive,” she said. “There are no longer many [clients]. Even people with great fortunes are obliged to be careful.”

Jean-François Lesage recalled, “I worked with her a lot, from ’49. We did lots of green and white. It was the era when people had their own couturier. It wasn’t about marketing, it was about clothes.”

Credited as the first to design ready-to-wear by Didier Grumbach, president of the Chambre Syndicale, Madame Carven said her goal was always to make women beautiful.

“I never did it for myself,” she said. “I did it for the youngsters that came to see me, to teach them how to dress, to give them confidence in their own beauty — how to show themselves off through colors, styles, everything.

“Designers [today] unfortunately think about making their mark on their design,” she continued. “I didn’t think of my designs like that. I thought about the young girls, the young women that I dressed, even my models, to show off their beauty to the maximum. In a young girl, there’s always something beautiful if we try to discover it and bring out the best. I think that should be the work of couturiers in whom someone has placed their trust because they must have a very pretty dress to go to a soiree. Couturiers, they do things as if it was for them.”

France’s new minister of culture, Frédéric Mitterand (nephew of the former French president François Mitterand), hailed Madame Carven as “one of the most eminent designers of French fashion,” and also, given that his mother wore the label, “someone who is part of my family.”

The minister, who was notably absent from Christian Lacroix’s show Tuesday, seized the occasion to reassure an industry shaken by the misfortune that’s befallen the house. “I would like to express just how attentive I am to the work, to the hopes and to the dramas, that they [fashion houses] can experience. I refer here to the difficulties experienced by the Christian Lacroix house at the moment,” he said as he closed his speech.