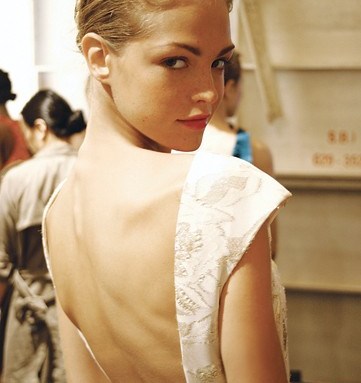 Honing her artistic eye, the 24-year-old Dutch model spent as much time behind the camera during New York Fashion Week as she did in front of it, snapping her peers backstage as well as shooting a handful of poetic self-portraits taken seconds before she was headed down the runway (she walked some 20 New York shows, including Rodarte, Lacoste and Vivienne Tam).

“I most enjoyed setting up the ambient shots with beautiful lighting, but it was pretty chaotic taking photos between getting dressed and running to hair and makeup, my camera in hand,” she says. “Somebody would always holler, ‘You’re not going to take that down the runway with you.’”

Stange, who is drawn to photojournalism and most admires the work of Henri Cartier-Bresson and the Magnum pack, said she was headed to Nepal once Paris Fashion Week ended, armed with her beloved compact Yoshika camera and a Polaroid Supercolor 670.

“I’m still young, so I’ve got time to experiment with different cameras and subjects; it’s just a question of finding the time,” she says. The busy bee also is scouting a London gallery to stage her first photo exhibition in the spring, in collaboration with Dutch painter Victor de Bie.