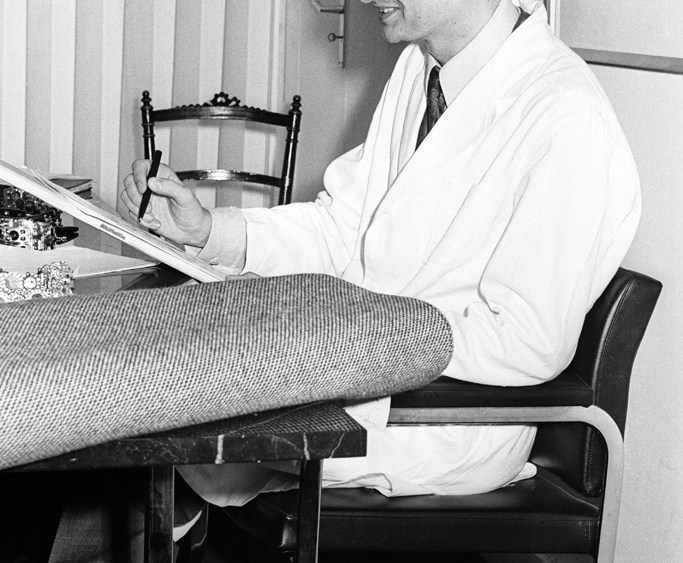 PARIS — Jean-Louis Scherrer, the French couturier whose fans included Jacqueline Kennedy and Sophia Loren, died in Paris on Thursday at the age of 78.

The designer passed away at the Jeanne Garnier palliative care clinic in the French capital’s 15th arrondissement after a 10-month illness, said Guillaume Feugeas, his right-hand man of more than a decade.

Funeral services will be held on Wednesday at 10:30 a.m. at the crematorium of the Père Lachaise Cemetery in northeast Paris.

Scherrer is survived by his former wife, Laurence, and his daughters Laetitia, a model and animal rights activist, and Leonor, a designer and muse to Givenchy artistic director Riccardo Tisci.

Hubert de Givenchy mourned the loss of one of his peers. “He brought his talent and his name to Paris fashion,” de Givenchy said. “In person, he was discreet, well brought up and a very kind friend.”

Scherrer’s last public outing was in July of 2012, when he went to see Raf Simons’ first couture collection for Dior. Since then, he had left the hospital only once, to celebrate his birthday in February at home with friends, said Dior’s Bernard Danillon, who was among the guests.

Scherrer’s ties to Dior date back to the early days of his career. Born in Paris in 1935, he had dreamed of becoming a dancer. When an injury dashed his prospects, he switched to sketching. He studied at the School of the Chambre Syndicale de la Couture Parisienne, then became an assistant at Dior alongside Yves Saint Laurent.

After house founder Christian Dior died suddenly in 1957, Scherrer continued at the firm under new head designer Saint Laurent, before going briefly to Louis Féraud. Scherrer launched his own label in 1962, the same year that Saint Laurent and André Courrèges struck out on their own.

“I liked him. He came from the world of haute couture. The authentic one, the one of yesteryear. A bygone world. He had talent,” Pierre Bergé, Saint Laurent’s longtime business partner, wrote on Twitter.

French Culture Minister Aurélie Filippetti said in a statement that with Scherrer’s death, “an important chapter of the history of French haute couture has closed.”

She added, “Worn by Claudia Cardinale, Jackie Kennedy, Françoise Sagan or Raquel Welch, his famous leopard-print cocktail dresses and polka-dot skirts were emblems of a new feminine silhouette. Jean-Louis Scherrer, a universal artist who had dreamed of becoming a dancer, flew the flag for French haute couture and ready-to-wear worldwide.”

From the start, however, Scherrer entrusted his name and business interests to partners, making for a bumpy career that saw the brand change hands on numerous occasions. Its current owner is JSB International, a French family-owned group specializing in commercial real estate and the international wholesale distribution of luxury goods. It bought the house from Dumesnil Group in 2011, announcing that it didn’t intend to relaunch the dormant rtw and couture lines, but planned instead to develop its other licenses, including that for watches.

In a statement, Bruno Bensoussan, chief executive officer of JSB International, praised Scherrer as a “virtuoso and passionate designer, who symbolized Parisian elegance and made a mark on his era.”

Didier Grumbach, president of the Chambre Syndicale, French fashion’s governing body, recalled that Scherrer’s first shop at 182 Rue du Faubourg Saint-Honoré was owned by the wife of a real estate promoter and sold couture in the basement and rtw on the ground floor.

The designer’s first collection was shown in a wine cellar with no retailers in attendance, but the second one was snapped up by Julia Trissel, a prominent buyer at Bergdorf Goodman, which carried it exclusively and guaranteed it a strong start on the U.S. market, he said.

In 1972, Scherrer told WWD, “I feel there is a very strong return to classics, to a feeling for quality. When you’re doing funny boutique clothes, you can cheat a bit on fabric or cut, but classics have to be intrinsically good.” In 1986, he emphasized to this newspaper that he was spending more time on his rtw with the idea of reaching a broader audience. “In the couture, you can spend 300 hours on one dress,” he said. “You can’t do that in rtw. But today there are so many beautiful fabrics that you can get almost the same feeling.” For his spring 1990 collection, he was in a folkloric mood, and said that he planned to do mixes of paisleys, lame and graphic prints. “We’ve done a lot of texture work on simple fabrics like flannel and wool covert,” he added, promising “strong and shocking” embroidery for evening.

“It’s a beautiful brand and a prestigious house, with a fairly dramatic and very, very tumultuous history,” noted Grumbach, who detailed the house’s numerous changes of ownership in his 2008 book, “Histoires de la Mode.” “Despite that, he maintained a great reputation through his couture designs, which were pleasant, slightly bourgeois and less radical than those of Saint Laurent, with whom he worked at Dior,” Grumbach said. “The quality of the workshops was very well-known.”

De Givenchy rued the fact that Scherrer’s business acumen did not always match his design talent. “I admired him among fellow couturiers, because what he did was tasteful, sober and well-made,” said the veteran designer. “I was always sorry about his setbacks, because he had a lot of talent, and I don’t know how his business was organized, but he had problems with his partners.”

After opening his self-named store on Avenue Montaigne in 1971, Scherrer launched a series of signature perfumes, among them Jean-Louis Scherrer, Scherrer 2 and Indian Nights. He also diversified with a line of furs and licenses, including those for eyewear, shoes and ties.

In an interview with WWD in 1980, Scherrer’s then-wife Laurence gave a charming glimpse of her husband’s behavior at home. “Jean-Louis is very sweet,” she said. “He doesn’t mind if I buy a Kenzo or a Saint Laurent dress. In fact, when we’re at small parties with friends, he prefers to see me in somebody else’s clothes. But he can also be extremely difficult. When he sees me in something he doesn’t like — he simply refuses to leave the house.” Scherrer’s daughter Laetitia was his longtime muse and modeled in his shows in the Eighties and early Nineties.

The Scherrer brand was owned by Standard Oil heir Francis Francis and the French beauty company Orlane, and finally reverted to Scherrer in 1976. In 1990, the designer sold it to a group majority-owned by his longtime Japanese licensee, Seibu. In December of 1992, however, Scherrer was fired from his house, replaced by designer Eric Mortensen. Scherrer expressed his shock at this move in an article in WWD headlined “I Was Fired Like a Street Sweeper.” “Why would I do something against myself? What would be my interest? How can they say that?” he asked. “I don’t know what Eric Mortensen understands about my style. I think Karl Lagerfeld understands Chanel and does something with the style — but Chanel is dead. But Scherrer?”

Stéphane Rolland designed its couture collections for a decade, starting in 1998. The store on Avenue Montaigne closed in 2008.

Scherrer won a Dé d’Or, or Golden Thimble, award for the best couture collection in 1980. He was made an officer of the Legion of Honor, France’s highest civilian decoration, in 2009.