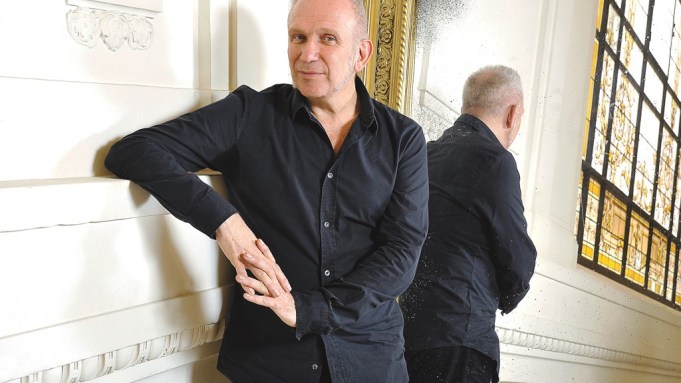 PARIS — Jean Paul Gaultier is opening a new chapter in a long and unconventional fashion career.

On Monday, the ebullient 62-year-old said he would halt his women’s and men’s ready-to-wear and devote himself to couture and the perfume business it powers, along with special projects.

While sounding sanguine about the retrenchment, after 38 years in rtw, he took a swipe at the relentless pace of fashion and the associated business pressures, saying it saps creativity and ultimately robs consumers of newness.

“For some time, I have found true fulfillment in working on the haute couture and it allows me to express my creativity and my taste for research and experimentation. At the same time, the world of ready-to-wear has evolved considerably. Commercial constraints, as well as the frenetic pace of collections, don’t leave any freedom, nor the necessary time to find fresh ideas and to innovate,” he said in a letter addressed to WWD.

“This is a new beginning, I will be able to express again my creativity fully and without constraints,” he wrote, hinting that he would now pursue “certain collaborations that I have not yet had time to explore.”

In an interview, Gaultier said he’s witnessed the fashion industry accelerate to the point where even designer collections are forced to adopt an industrial pace and scale. What’s more, they must compete against fast-fashion behemoths like Zara and H&M, which offer compelling fashions at an attractive price.

“It comes to a point where you don’t even have time to think,” he said.

Gaultier stressed that he is energized at the prospect of devoting more time and research to couture, hinting that he would enlarge his collections, and ramp up costuming duties for performances.

He also plans to take on an array of projects, including hotels and interior decoration, plus collaborations with specialty manufacturers — or even other fashion groups — on rtw or accessories projects.

His final women’s rtw collection is to be shown at the Grand Rex on Sept. 27 during Paris Fashion Week for the spring season.

Gaultier said his swan song would be mounted with the same joie de vivre and rambunctious spirit he’s come to represent. “It certainly won’t be a funeral,” he said with a yelp of laughter, also teasing that his final rtw collection might have a collectible appeal.

News of the downsizing comes three years after Puig, the Spanish fragrance and fashion group, acquired a majority stake in the Gaultier house, and points to challenging times for midsize players in an era of megabrands with global store networks.

It also suggests that despite the French designer’s enduring popularity and cult following — underscored by attendance records for his roving retrospective exhibition — the fashion house has struggled to translate his madcap creativity into profits.

Gaultier noted his decision to stop rtw and accessories was made in concert with Puig executives, with whom he established “a relationship of trust” and was following an “in-depth assessment” of the future of the house.

“We looked at various possibilities considering the present state of the company and we have reached the same conclusion,” he wrote.

It is understood the rtw and accessories shutdown is to affect a few dozen employees, following the required consultations with work councils.

The development means the loss of a license for Italian manufacturer Gibò Co. SpA, which had taken over the license for Gaultier’s women’s and men’s collections in 2013, after having been the designer’s original partner in the Eighties.

“He no longer felt at ease in today’s ultracompetitive fashion scene. I think that he might feel like a bit of a fish out of water, with all the current emphasis on competition between one fashion colossus and another — which doesn’t have anything to do with what a designer expresses in terms of creativity,” said Gibò’s owner and chief executive officer Franco Penè, noting the loss of the license would not affect employment at his facilities. “Jean Paul has already contributed so much, he doesn’t have to prove anything to anyone.”

Ralph Toledano, president of the fashion division at Puig, said the rationale behind stopping rtw is to “focus on every single area where Mr. Gaultier’s talent is used at its best. He loves haute couture, notably because it is free of commercial constraints. It gives him the time to elaborate concepts, research and work intensively — both creatively and technically — on every single aspect of the garment.”

In an interview, Toledano noted that Gaultier Paris is one of the few couture houses able to operate at breakeven, and “our recent commercial results indicate that we have amazing growth opportunities.”

Gaultier’s couture atelier counts about 25 seamstresses, swelling to about 40 ahead of the twice-annual shows, the designer said. He estimated the house counts about 80 regular clients — an impressive number, given that perhaps only a few hundred women in the world are devotees of the rare, costly and labor-intensive enterprise.

Asked if the rtw shutdown signaled that Puig was backing away from the fashion business, Toledano replied: “There is clearly a strong correlation between success in fashion and a great fragrance business. However, our plan is essentially guided by our wish to concentrate in areas where Mr. Gaultier enjoys working and excels particularly.”

He added that Puig has “very ambitious plans” to develop Gaultier’s beauty business, a pioneer in offering makeup for men and known for inventive packaging such as the tin-can outer packaging for men’s scents.

Fragrances — headlined by the women’s Classique scent and Le Mâle for men — remain the biggest and most successful part of the business, and were a key attraction for Puig.

Come mid-2016, the Spanish company will get its hands on the lucrative license, held by Beauté Prestige International, a subsidiary of Japan’s Shiseido. Sources estimate that fragrances represent more than 80 percent of the Gaultier business, if one considers the wholesale value of all products.

Market sources estimate the Gaultier house generates consolidated revenues of about 30 million euros, or $38.9 million at current exchange rates, with royalties from licensed products — fragrances, watches, eyewear and beachwear among them — generating about half that sum. Besides couture, leather goods and accessories were also produced in-house.

The fashion house has weathered periods of struggle over the past decade.

In 2004, Gaultier let go 31 workers in a bid to save its money-losing couture business and lift the house out of the red following heavy investments in a new 50,000-square-foot building on the Rue Saint Martin with a swanky Philippe Starck decor.

As a new owner, Puig arrived with expansion ambitions.

When Gaultier moved its rtw license after 17 years with Aeffe to Gibò in 2013, Puig had set a goal of doubling the designer’s sales in the next five years, and revamping its accessories offer. At the time, the company said more than 200 doors carried the top women’s rtw collection worldwide.

Also last year, the company was on the cusp of introducing a new contemporary and streetwear-driven clothing line with Ittierre SpA when the Italian manufacturer ran into financial difficulties, scuttling what management described as a promising new version of the French designer’s once blockbuster Gaultier Jeans franchise.

The designer had also scaled back his men’s wear business in recent years, scrapping runway shows in favor of more low-key presentations, and has made few waves in the handbag business, a crucial cash-cow for many European brands.

Remaining Gaultier boutiques, concentrated in France and Asia, are expected to wind down following deliveries of his final collections.

Last week, he flew to Gothenburg, Sweden, to stage a fashion show for the one-off line he designed for Scandinavian fashion chain Lindex, arriving in 323 of its 480 stores next month. The spectacle featured two Eiffel Towers on the runway, performances and top models including Karen Elson, who strutted in front of a crowd of 1,600.

Gaultier also continues to design for musicians including the likes of Kylie Minogue, soon embarking on a new tour, as well as Mylène Farmer and Conchita Wurst, an Austrian drag performer who won the last Eurovision Song Contest, and who wore the bride’s outfit at Gaultier’s most recent couture show.

Like his fashions, Gaultier’s business model went against popular convention, based heavily on licensing, even for core products like rtw and jeans.

Before Puig, Hermès International controlled a 45 percent stake in Gaultier. The maker of Birkin bags and silk scarves was seen as an unusual partner for the designer, long described as an “enfant terrible,” or wild child, because of his irreverent approach to fashion and such outré inventions as skirts for men and Madonna’s now-iconic cone bustiers for her “Blond Ambition” tour.

Prior to Puig’s acquisition, the Gaultier business saw a succession of managers, with the designer himself taking on the title of president in 2010 until Puig arrived. The Spanish group brought in Toledano, an industry veteran, in 2012, and he appointed a new manager, leaving Gaultier free to focus on design.

Longtime Gaultier president Donald Potard, a childhood friend of the designer, resigned in 2004 as Hermès ratcheted up the pressure to get the house out of the red. Potard was as unconventional a ceo as Gaultier was a designer. He once remarked that he broke almost every rule in the business: “We did couture after ready-to-wear, perfume before the couture and we opened boutiques almost as the last step,” Potard said.

Still, Hermès tightened its ties with the maverick designer by tapping him to succeed Martin Margiela as women’s rtw designer in 2003. Gaultier gave up the role in 2010.

After sketching designs for his mother and grandmother as a teenager, including one of a coat he invented with rucksack closures, he dispatched his portfolio to Pierre Cardin, who engaged him as a design assistant for two years. Gaultier also worked for Jacques Esterel and Jean Patou before launching his signature rtw with a subversive streak and a streetwise edge.

He established his beauty business in 1991, joined the couture calendar in 1997 and launched an accessories division in 2000.

The exhibition “The Fashion World of Jean Paul Gaultier: From the Sidewalk to the Catwalk,” which originated in Montreal in 2011 and has welcomed more than a million visitors in seven cities, is destined for a four-month residency at the Grand Palais next year after a stop in Melbourne. It features about 150 couture and rtw pieces from 1970 through 2013.