Paris Couture Preview: Ones to Watch 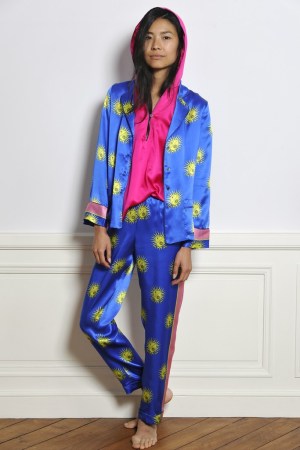 Coming from a cosmopolitan background, designer Raphaëlla Riboud took inspiration from her childhood travels to the U.S. and the U.K. when she decided to launch her collection of high-end pajamas, recalling a lifestyle of laid-back luxury and a little nod to Nineties grunge, when lingerie strolled down the street.

She presented her first collection a year-and-a-half ago and it was immediately snapped up by Colette in Paris and Tomorrowland in Japan.

Now in its fourth season, the line is produced in France in a factory that specializes in fine silk fabrics such as georgette, crepe and twill.

“It really starts with the fabric,” Riboud said in her chic Bohemian apartment, overlooking the Palais Royal gardens. The charming summer collection, partly inspired by her Indian roots, features a “coat of arms” print in vibrant blue and yellow with soft pink side bands, pajama pants and shorts, and bright fuchsia hooded shirts, and cornflower blue cotton jersey or navy silk pajamas, both with contrasting piping.

“My idea of sexy is a woman who jumps out of bed dressed in her lover’s attire,” added Riboud.
The tight, well-edited offering will add some embroideries and lace numbers in the future, and Riboud expects to develop a small line of accessories as well.

The collection will be presented at the Raphaëlla Riboud showroom from June 30 to July 5, at Agence M&K: Perséphone Kessanidis, 46 Rue Pierre Charron, 75008.

NEXT: Natan by Edouard Vermeulen >>

Almost unknown in France and the U.S., interior designer-turned-couturier Edouard Vermeulen has enjoyed greater design recognition in northern Europe. The Belgian designer started with a capsule collection in the back room of the old couture house Paul Natan he just bought, 30 years ago in Brussels.

The collections gained instant attention and grew rapidly as a full couture line, keeping the name of the house alive.

Vermeulen now has a faithful clientele within aristocratic circles of northern European royal courts. He is considered the official couturier for the Belgian Royal family, and dresses the princesses and duchesses of the Dutch and Swedish crown.

His style is pure and feminine, if not adventurous, and aimed to exude a reserved elegance.
To celebrate the 30th anniversary of the house, Vermeulen is presenting his Natan show at the Belgian Embassy in Paris on Monday.

He describes the collection as being about feminine couture silhouettes done though a minimalist lens, punctuated with pastel color.

Asked why he is showing in Paris, Vermeulen replied, “During my 30-year career, Paris has always been and still is the fashion capital. It’s time to come here, to be in touch with a more international audience and to open the house to new markets.”

The Natan by Edouard Vermeulen show will be held at The Belgian Embassy 25, Rue de Surène, Monday at 5:30 p.m.