Paris in Bloom at Couture Week

Amid haute jewelry and beauty interlopers, Couture Week got under way as Raf dazzled with earthly delights, Donatella went for sophisticated sizzle and Giambattista gave pretty a bit of an edge. 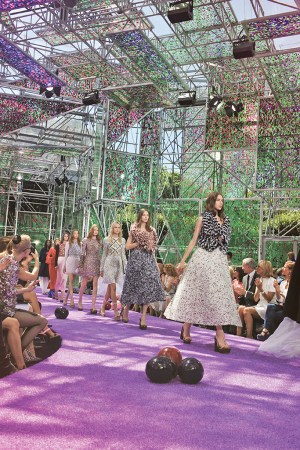 Couture Week. The very words ring lofty, no? No. Not anymore. What long ago was an intimate gathering of clients, press and retailers has long since morphed. In this Age of Endless Marketing, Couture Week is yet another window for anyone with a product to celebrate — and a significant budget with which to do so — to jump in, ring bells and get noticed.

The high jewelers, those who populate the discreetly yet mightily secured salons of Place Vendôme, were the first to move in, which made perfect sense. Could there be a more natural pairing than that of the hautes — couture and joaillerie? Chanel delivered the most over-the-top presentation of the first three days as on Tuesday morning Karl Lagerfeld incorporated a separate show within his glittering couture show to highlight the jewelry, a complete re-edition of the stunning Bijoux de Diamants from 1932, the only fine jewelry Coco herself ever created. In short, the extravaganza featured a host of celebrities including Julianne Moore, Kristen Stewart, Rita Ora and Jemima Kirke, each wearing a look Lagerfeld designed just for her and all dripping in diamonds.

Elsewhere on the jewelry circuit, only 10 rarefied houses made the Chambre Syndicale’s official calendar, but countless others staged openings and events. Getting it all under way: Judith Price’s High Jewelry and Timepieces Awards.

Resort, the season that just won’t end, opened in early May and rolls into July, so why not take advantage? While the ever-elusive Priestess of Cool Chic Phoebe Philo took her usual Garbo approach to showing Céline — “come, but no pictures” — the great Goddess of Cool Chic, Miuccia Prada, went the reverse route. She commissioned “Miu Miu club,” a rollicking, raucous, star-studded — from the endlessly glamorous Kate Moss and Naomi Campbell to 15-year-old Kiernan Shipka — party for the joint purpose of showing the brand’s resort collection and launching its first fragrance (lily of the valley and peppery accents; girly blueand- red bottle).

Ah, the beauty world. MAC muscled into the week with a party in collaboration with Giambattista Valli. And there were anniversaries to note: Lancôme (80th) and Viktor & Rolf (Flower Bomb fragrance, 10th).

There were (or will be) parties (amfAR) and other openings as well — Tory Burch and Elie Saab stores; Louis Vuitton’s La Galerie, a private museum to showcase the house goods.

But to some of us, Couture Week is still first and foremost about the clothes. In the early going, Dior’s Raf Simons found bold fashion in a study of Bosch’s “The Garden of Earthly Delights.” Donatella Versace wisely channeled her house’s sizzle into a graceful take on evening, and Giambattista Valli infused his pretty party clothes with a soupçon of edge.

When the shows finish in Paris on Wednesday, the fashion flock hits the road for a special, hometown edition of Maria Grazia Chiuri and Pierpaolo Piccioli’s Valentino that promises an intimate insider’s view of Rome. But before that: In Paris, a haute interloper unlike any other. On Wednesday night, the tireless Lagerfeld will show a second couture collection — this one for Fendi, marking his 50th (not a typo) year designing for the house.

Though he loathes anniversaries, Lagerfeld is focusing on the fashion, unfazed by elevating the already stratospheric Fendi to official haute status. “I don’t want to sound pretentious, but I invented a lot with furs so I can handle that as long as I have good workrooms to work with,” he tells WWD’s Miles Socha (page 40). “I see it like another material: Velvet or fur, it’s the same thing. It’s just another technique.” And another addition to Couture Week, this one sure to be worthy of the distinction.